Staff using GoFundMe page because ‘Government funding is not available’ 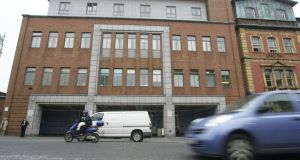 A lack of space in the State’s busiest maternity hospital is increasing the risk of infection and putting the lives of newborns at risk, the hospital’s master, Prof Fergal Malone, says. File photograph: Cyril Byrne

Staff at the Rotunda Hospital in Dublin have resorted to online fundraising to buy a new heart ultrasound machine for extremely premature babies because “Government funding is not available”.

A GoFundMe campaign launched by the hospital’s neonatal intensive care unit (NICU) a week ago has already raised €13,000 out of a target of €76,500 for the vital piece of equipment.

The appeal is the brainchild of neonatologist Dr Afif El-Khuffash and colleagues from the unit. Potential donors are being encouraged to give at least €5 so they can be entered in a draw and win a designer handbag or tickets for international rugby games.

Every year, the NICU provides specialised care for more than 1,200 babies, some of whom weigh as little as 400g.

The ultrasound, known as an echocardiography machine, is used to assess heart structure and help decide which medication best suits the babies being treated. About 750 scans are carried out yearly.

Staff behind the fundraising drive say the device currently in use has reached the end of its life and the information it can give is very limited.

“As Government funding is not available for a replacement echocardiography machine, they [NICU staff] need help from the public to raise essential funds to purchase a new machine so that they can continue to provide the best possible care for their young patients.”

Asked about the fundraising campaign, a hospital spokesman said the Department of Health only allowed for the replacement of equipment after it had become “unserviceable”.

The equipment currently in use was funded by the hospital’s charitable arm, the Rotunda Foundation, he said.

Last month, the master of the Rotunda, Prof Fergal Malone, warned it was “only a matter of time” before more newborn babies are injured or die as a result of the overcrowding “crisis” in the hospital.

A lack of space in the State’s oldest and busiest maternity hospital was increasing the risk of infection and putting the lives of newborns at risk, he said.

The hospital wants to rehouse the intensive care unit in a new €49 million, four-storey development at Parnell Square to relieve the overcrowding, pending a long-term move to the campus of Connolly Hospital in Blanchardstown.

This week, the HSE announced a record €17 billion budget for the health service next year.