Maybe it wasn’t so far from avocados we were reared

Pricewatch: Some of you begged to differ with our 1980s nostalgia-fest 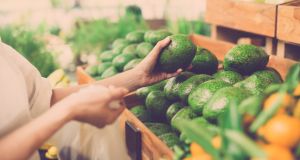 “A great favourite for starters”: Maura Bourke says she was always able to get avocados in the late 1970s

A lot of you have responded to last week’s you-kids-don’t-realise-how-good-you-have-it nostalgia-fest. Some readers share our recollections of the 1980s and all the things we didn’t have that are commonplace today. Others call us idiots for claiming that there were people in Ireland who had to live without pasta, avocados, more than two TV channels, and nice coffee.

“You mentioned that Irish consumers today have a whole lot more choice in how they spend their money than they ever had back in the 1980s,” Cormac O’Reilly writes. “Maybe you missed an opportunity here to explain to those lovely Millennials that not only did we have less choice, but what little choice there was wasn’t available on a Sunday. Imagine their horror!”

Tom Doherty, who grew up in Finglas in the 1960s and 1970s, recalls all the people who used to call to the door: the bread man came five days a week, the milkman seven, regardless of the weather, with his horse-drawn cart. Then there was the insurance man. “In the days before direct debit he would call to collect monthly premiums. He’d be carrying money around Finglas, and when we reached working age an ‘inspector’ would accompany him, to flog us a new policy,” Doherty writes.

There were also the pools man; the paper girl selling the Evening Press, who “would be chased if she brought anything earlier than the sixth edition”; the vegetable man; the pig man, who collected food waste, generally potato skins and vegtable trimmings; and the postman, twice a day, with morning and afternoon mail.

Doherty’s list goes on. Swastika Laundry, of Shelbourne Road, came around with an electric van “complete with the offending insignia”. The gasman came to empty the coin meter, and the coalman with coal and slack. “As kids we had to watch them, to make sure the bags were full and the right number delivered.” The local GP made house calls, as did the rag-and-bone man (not the singer, kids). Finally, there was the church collector, who called for the weekly donation.

Timmie Maurer recalls the late 1980s, when a young Italian doctor came to spend New Year with her and her family, in Co Clare. “We took him to Galway to buy ingredients for the meal he proposed cooking for us. Imagine his dismay when he asked us to take him to ‘the street of the pasta makers’ and we had to admit that Galway didn’t actually have one! Nor could it provide courgettes or aubergines at that time.”

Pat O’Brien cannot believe we made no mention of newsflashes. “No one under 30 will ever understand the dread, anticipation and, yes, excitement that came with the words ‘We interrupt this programme to bring you a newsflash . . .’ Just not the same on Twitter.”

Maura Bourke disagrees with many of our claims. “I lived, travelled and dined out in the 1980s. I and lots of my friends travelled and hiked in many parts of the world. There were always cheap ways to get there. If you got married in your 20s you were stuck, but if you didn’t you could get up and go, just like now.

“On the food issue, I could always get avocados in the late 1970s. They were a great favourite for starters. My mother, in the country, bought a coffee machine in the early 1980s. Less sophisticated than the modern machine, but it brewed beans that were bought in Bewley’s. In the mid-1970s I regularly cooked spaghetti Bolognese, as it was cheap. I never used a tin. I had a remote for the TV in 1984. I had Chinese takeaways delivered in the early 1980s. Condoms and the pill were easily available at any family-planning clinic in 1976. I don’t know where you or your family were living in the 1980s.”

Galway city, Maura, where remote controls, avocados and coffee machines were the things of our most fantastical dreams.

And then there is John Caden. His parents had a small grocery shop near Kelly’s Corner in Dublin from the 1940s to the 1980s, and he became quite familiar with food trends. “So may I offer some minor corrections to your piece?” he asks.

“First, you were right about couscous. I first came across it in an Algerian cafe on Rue de la Huchette in Paris in 1968. When I got back I went on a mission to get some here. But in vain. One day I saw that an Algerian restaurant was opened on Aungier Street. With great expectations I went in for lunch. No luck. As the young American owner put it, ‘Couscous is as rare in this town as rockin’-horse s**t’.”

Caden goes on. “Wrong about avocados. They arrived in the late 1970s. They were popular for a while, but the problem with them was getting the olive oil for the dressing, so interest kind of drifted away.

“Wrong about dried spaghetti. My parents sold lots of it to the many Nigerian students living around South Circular Road, Rathmines and Harcourt Street. This population disappeared during the Biafran war, when relationships between Ireland and Nigeria soured.”

Also wrong about sweet potato. “My folks, who imported Nigerian foods in the 1960s, did quite a good, but customer-specific, trade in yams and sweet potato. This business was also a victim of geopolitics.”