In the commuter pecking order cyclists are right at the bottom 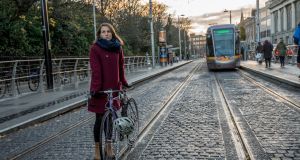 A Dublin Bus nearly flattened Sorcha Pollak after her tyre became wedged in the tracks at the corner of College Green. Photograph: Brenda Fitzsimons 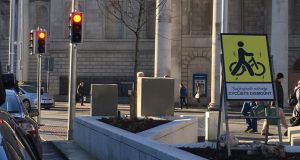 The National Transport Authority says it is installing a number of “cyclists dismount” signs “because of safety concerns”.

I’ve always been a cyclist. I grew up in a family of cyclists - we weren’t quite athletes racing through the Wicklow hills, more bike owners that ambled to school and work each day with our bags strapped precariously to the rear rack. Aside from a couple of short intervals while living abroad, I’ve always used my bike to get around. It’s cheap, it’s easy and up until recently, it felt pretty safe.

My enthusiasm for cycling has inevitably brought its fair share of bumps and bruises. There was the fall along the Grand Canal when I nearly landed in the water after hitting a pothole. Or that time a teen ran in front of my bike as I cruised along the north Dublin Bay cycle path, throwing me headfirst over the handlebars (he was fine by the way). And let’s not forget the numerous Dublin Bus drivers that have almost sent me flying as they overtake the cycle path, leaving mere inches between their vehicle and my wheels.

The frequency of these incidents has increased in recent years with one clear explanation - the Luas tracks. Up until a few months ago I generally avoided these trip-ups by staying away from the tracks criss-crossing north and south of the river. However, with the Luas extension now weaving around College Green, avoiding the approx 3cm chasm that lies between the tracks has become near impossible on my daily commute.

Most of these accidents are minor enough. However, there have been some more serious falls. A couple of months ago a Dublin Bus very nearly flattened me after my tyre became wedged in the tracks at the corner of College Green forcing the driver to screech to a halt.

And then there was my dad. A Dublin cycle veteran of more than 40 years, his tyre became caught as he rounded the corner from Parnell Street onto Parnell Square west. I later learned that he staggered into the Rotunda where he promptly lost consciousness (he was wearing a helmet when he fell). The comedy of being cared for in a maternity hospital surrounded by newborn babies was lost to his daughters who rushed from our respective workplaces to check on him. After a transfer to the Mater Hospital, a 10-hour wait in A&E, a scan to check his head, he was sent home, luckily with just a strained arm and a gash on his face.

Earlier this week while cycling home I noticed a bright yellow sign at the intersection of College Street and Westmoreland Street instructing cyclists to dismount. A call to the National Transport Authority (NTA) revealed a number of these signs were being installed across the city “because of safety concerns”.

An NTA spokeswoman explained there were a high number of trams, buses/coaches and taxis using the same street space as “a significant volume of cyclists” along a corridor with “a restricted width between kerbline and tram track”. “This arrangement gives rise to concerns for the safety of cyclists using these particular links, with the possibility of bicycle wheels becoming caught in the groove of the tram track leading to accidents and incidents.” She added that more “permanent signs” would be erected at Grafton Street, Nassau Street and Dawson Street.

That’s right, the solution to poor planning along some of Dublin’s busiest streets is for cyclists to get off our bikes and walk. It doesn’t matter that 95,000 of us are choosing to stretch our legs each day on the morning commute. In this city, cars and buses have precedence. The Luas comes next. And right down the bottom of the pecking order, cyclists must cautiously navigate the deep grooves which now decorate the streets of our capital city.