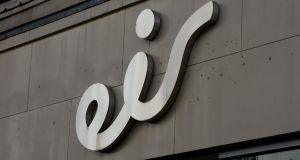 Our reader says the experience has been eye opening ‘as this is the first time I have dealt with a national company’. Photograph: Alan Betson / The Irish Times

A reader called Ciara got in touch because she was having an issue with our friends at Eir.

“I ordered a phone on November 29th, 2019, but due to a number of failed deliveries I decided to cancel the order within the 14 days I had to change my mind. I needed a new phone urgently as my own was on its last legs,” she writes.

She contacted Eir and was told to refuse the package upon delivery. “However, I was not at home when they delivered the package. It was left outside the door on the ground even though I was told I would need to show ID and proof of purchase upon delivery. I contacted the delivery company several times about getting someone to collect the package but that again was useless.”

So she set up a Parcel Motel account and on December 13th dropped the phone into such a facility. “There are only two updates of the package, one being that is was stored, and two that it was collected. I contacted the delivery company for further confirmation and was told that it was most likely delivered to Eir returns but hadn’t been processed yet. I have contacted Eir countless times and have been told each time that they are waiting on confirmation that the phone has been returned.”

account. “I paid a total of €279 for the phone. This included a deposit and the stated price of the phone which was included in a bill pay plan.”

She said the experience has definitely been eye opening “as this is the first time I have dealt with a national company seeing as I am only 18. I am working at the moment and trying to save up for a car and €279 would go a long way towards funding that. I understand that I was returning the phone at a relatively busy time of the year but to see that there has been no update at this stage is ridiculous.

“Many of the representatives I have been talking to have been helpful and understand my frustration, but they can do nothing in relation to the return of the phone and, therefore, cannot cancel the account to give a refund. Can you please help me with this issue? I don’t think I can call back one more time without losing my temper. I have been very polite and understanding so far but the continued failure on their behalf to provide me with my entitled refund is very frustrating.”

We got in touch with eir and were told that it had “been in contact with the customer to apologise for the inconvenience and have followed up with the courier company. The issue is now resolved and the customer is satisfied. If a customer wishes to return a new, unopened mobile device they can call 1901 and eir will send out a prepaid envelope with everything the customer needs to return that order, subject to standard terms and conditions. There is no need to use a parcel drop service for return of mobile devices.”