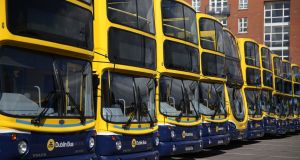 Dublin Bus has lost control of 10 per cent of its bus routes to a private operator in the biggest change to the city’s bus services since the State-owned company was established 30 years ago.

British transport company Go-Ahead has secured a tender to take over 23 existing Dublin Bus routes and introduce one new service, running from Citywest to UCD. The company, one of the largest bus operators in London, will begin services in Dublin from November 2018.

The National Transport Authority (NTA) put the routes out to tender in 2015 and six companies were shortlisted. However, four dropped out, leaving just Dublin Bus and Go-Ahead in the running.

NTA chief executive Anne Graham said Go-Ahead had offered the “most economically advantageous tender” and would bring a “fresh dimension” to Dublin’s bus services. She said she was not in a position to reveal how much Go-Ahead would be paid for the service until a contract stand-still period had passed, but was “confident the tendered service will result in savings for the State”. The NTA “expects improved punctuality and reliability” on existing services, she added.

In a statement, Dublin Bus chief executive Ray Coyne said it was a “disappointing” outcome. “We submitted a high-quality, competitive bid based on our years of experience in operating these routes.”

The 24 routes are all suburban orbital services on the north and south side of the city, none of which run to Dublin city centre. Routes include 45A from Dún Laoghaire to Kilmacanogue, the 18 from Palmerstown to Sandymount and the 17 from Rialto to Blackrock on the southside; and the 102 from Sutton station to Dublin Airport, the 4 from Clontarf Road to Santry, and the 220 from Ballymun to Blanchardstown serving the north and west of the city.

Ms Graham stressed the deal did “not represent a privatisation of the service. Nothing is being sold and the services are not being deregulated.”

The services would remain in the control of the NTA, she said, which would set fares, frequency and scheduling for the service. The NTA would also be providing the buses to the company.

The frequency of services on the routes would increase by about 35 per cent. Ms Graham said the bus stops, travel cards and fares would all remain the same.

No Dublin Bus drivers will be made redundant, but they can if they wish transfer to Go-Ahead. Ms Graham said it was “up to the operator” what rate of pay they offered new staff, but she said she did not believe there would be a “drive to to bottom”.

Following the announcement, the National Bus and Rail Union (NBRU) warned of “major industrial unrest” if more routes were handed over to private companies. NBRU general secretary Dermot O’Leary said the union would ensure “our affected members on the privatised routes will not be forced to move from their current workplace”, and would be seeking to recruit Go-Ahead staff to the union.

Go-Ahead was established in the late 1980s in the UK following the privatisation of the National Bus Company. Just hours before the award of the Dublin contract yesterday, one of its buses crashed into a shop in southwest London. Ten people suffered minor injuries.

Earlier this year, the National Transport Authority announced plans to overhaul the existing Dublin Bus service with a reorganisation of routes; the implementation of a cashless payment system ; simplification of the fare structure, to allow movement between different transport services without financial penalty; and as the segregation of buses from general traffic on the busiest routes to and around the city.

45A Dún Laoghaire to Kilmacanogue

17A Blanchardstown Centre to Kilbarrack

76A Blanchardstown Centre to Tallaght

33A Swords to Balbriggan

33B Swords to Portrane

Plus new route: 175 Citywest to UCD