Electric Picnic plan: What to bring and at what cost

While you may not be flush financially, we’ve come up with some ideas for saving money 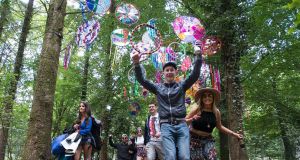 Walking in the woods at the Electric Picnic. Photograph: Dave Meehan/The Irish Times

Summer has come and gone but for many of us the main event is yet to come. If your lifestyle has been more Celtic Tiger champagne than hidden naggin and bottle of Buckfast over the past few months, then your bank balance might not be best prepared for the Electric Picnic which is coming down the tracks at the start of next month.

But don’t be worrying, as we’ve come up with the best ways to save money without it affecting the fun factor.

We’d be foolish to claim that the ticket is the bulk cost item when going to a festival, however it is the initial big expense. You can avoid paying for a ticket altogether while raising money for a worthy cause by taking on the Tour de Picnic. The annual charity cycle and run to Electric Picnic is now in its ninth year and is collaborating with the ISPCC, The Jack & Jill Foundation and Headway.

If you’re willing and able to challenge yourself to an 80km spin or a 15km run and pay a €100 deposit (increased to €150 after June 1st), you will be richly rewarded with an official Tour de Picnic jersey, snacks, water, packed lunch, burger and beer on arrival, baggage transfer, return bus ticket, return bike transfer and a ticket to Electric Picnic 2017. It’s basically the same as having your mammy with you – just not as awkward.

Participants must have raised a minimum of €395 by August 11th, with the deposit counting towards your final fundraising total.

The 15km run has already sold out for this year, but it could be an option for EP 2018 if cycling isn’t your thing. Bear in mind that the cycle is not easy. We spoke to one person who did it a couple of years ago and he said he’d trained for the guts of three months to go the distance. His verdict on the experience? “It was a killer.”

It’s also possible to blag a free entry by volunteering at the festival. Electric Picnic takes on weekend volunteers who gain entry in exchange for 24 hours of voluntary work. The volunteer shifts can be split in to four six-hour shifts or three eight-hour shifts.

Those who sign up have to pay a €250 bond which will be returned at end of the month – provided they fulfill their duties and stick to the rules, which are pretty basic if you’re capable of exercising any level of self-control at a festival. And keep an eye out for companies hiring if you’d like to make some money while taking in the festival atmosphere.

If the only place you plan on coming near to breaking a sweat over the weekend is in a tent while dancing to your favourite band, then we would like to recommend buying your ticket before the event sells out to avoid the extortionate prices charged by ticket touts.

Mind you, Electric Picnic tickets sold out on the morning of release this year and were then being sold on for almost three times their cost price on tout sites later that day, so that might not be an option.

Car-pooling with your fellow festival-goers can cut on the costs of transport if you’re going to share paying for fuel and tolls. Parking at Electric Picnic is free. Just make sure the designated driver takes it easy on the 7-Ups on the Sunday night so they’re safe to drive the next day.

A number of coach companies arrange transfers to Stradbally, Co Laois, from Dublin and other locations across the country for the festival. All the details you need can be found on the event’s website. Portlaoise train station is the closest one to the festival and there will be a shuttle bus going to and from there to Electric Picnic. A cab from the train station to Stradbally will cost you about €20 on a good day but if you are stuck in traffic along the way you could end up paying a whole lot more.

Yes, it’s tempting to cut costs on your tent for the weekend, but Pricewatch advises against this. The Irish weather is not the most reliable for camping, putting it mildly. The last thing you want is to be faced with a bag of soggy clothes for an entire weekend, leaving you smelling like Beethoven after a swim in the Liffey. You’ll also find yourself queuing up to spend wads of damp notes on hot drinks and warm food to make yourself feel better. Instead, keep an eye out for deals on tents in the lead up to the festival. Buy cheap, buy twice. Invest in a decent tent, bring it home in one piece and you’ll save yourself the expense of buying one again – as well as the hassle of figuring out how to erect a new one. Put water sensitive valuables in Ziploc bags if it is pouring rain.

Let’s face it – this is the bit we’ll probably have planned best for. Festival booze does not come cheap once inside the arena. Campers are allowed to bring up to 48 cans for personal consumption. Glass is prohibited so don’t get caught out. You can’t bring your own alcohol into the arena prior to the bars closing at 1am. After this you can take in up to four cans of beer or cider. We also advise bringing a decent supply of water. There are drinking water points throughout the site, but it’ll be worth having some on hand for when you wake up.

Smartphone batteries are far from reliable. There will charging tents at the festival but these are likely to be filled with other people queuing up to seek contact with the outside world. We recommend switching to airplane mode until you (inevitably) get separated from your friends and bring a powerbank with you if you have one.

Happiness is a warm bun (sorry)

You might wonder whether you’ll really spend that much money on food over the weekend but trust us, you will if you’re not prepared. We hate to roll out another cliché – but fail to prepare, prepare to fail. The food at Electric Picnic is spectacular, but it is not easy on the wallet. It’s also likely that self-control will not be easily exercised at certain points over the weekend. At least try to pack breakfast and nibbles. Bananas are excellent for hangovers as they help to replenish the potassium that is depleted after drinking lots of alcohol – or so we’re assured. Tinned foods, cereal bars and tubs of Pringles will all survive even the worst battering in your luggage and remain edible. If you’re considering going all out and bringing a small stove or BBQ, make sure to check on the Electric Picnic website that what you plan to bring is allowed in. They recommend that “if you want to cook you should bring disposable BBQs or permitted cooking stoves only”. Gas canisters are prohibited.

Of course you don’t have to do the Electric Picnic on the cheap. A full seven years ago, Pricewatch was sent to the Picnic and forced to sleep in a tent while all the other Irish Times staff sent down to “work” for the weekend were put up in some class of fancy Dan hotel. But Pricewatch got its own back. And spent all around it, in the hope that we could claim it all back on expenses.

We weren’t, but that’s a whole other story.

This is what a weekend at a festival set us back, back then. We can’t imagine things will be cheaper this year.

The cost of a tent was €220. And for that price we didn’t even get to own the tent. We stayed in one of the fancy camping areas where they put the tent up for you and give you an air bed and two sleeping bags. No sign of pillow as we recall.

In the run-up to the festival we noticed that there was an official online offie selling beer at €2.50 a can. It was spectacularly bad value for money but we figured that seeing as someone else was picking up the tab we’d buy a slab of 24 which cost us €60 It was only after we bought the beer that we realised we couldn’t bring it into the main arena and as Pricewatch didn’t really fancy drinking lager alone in a tent that someone else put up, the money was effectively wasted – which is what we would have been had we drank it.

The miner’s headlamp that cost €40 seemed like a bad idea but until we had to venture in the direction of the Portaloos in the dead of night. And we reckoned we had no option but to buy a sun hat and a rain poncho and wellies and flip flops and all that set us back €120.

We spent a further €12 on an official Picnic lanyard timetable. Why? We have absolutely no idea other than it seemed like a great idea at the time. The €50 spent on souvenir T-shirts and merchandise could probably have been better spent elsewhere but the tenner it cost for a wheelbarrow to lug all the stupid stuff we had to bring with us was money very well spent. An on-site gig locker cost €15, taking Pricewatch’s total spend to €882 for three days. And that doesn’t even factor in the cost of a ticket and transport to and from the event.

For that kind of money it would really want to be the weekend of a lifetime.