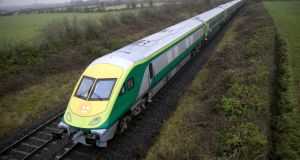 Irish Rail: One reader believes the price difference between online and at a station is “exorbitant”.

Rail rage has prompted several readers to get in touch in recent days so we thought we’d bunch all the mails into one item rather than spread them out.

The first issue is in relation to their customer charter refund policy. “My train was delayed by over 60 minutes,” writes a reader. “This entitled me to a 50 per cent refund voucher. I went through the process and received €6 in vouchers. I always purchase my tickets online due to the crazy price of buying a ticket in the station. Problem is the vouchers cannot be used online and only redeemed at a station. Typically I can get a single to Limerick from Dublin for €12 online. This ticket is €53 in the station or €47 with my discount. Pretty useless I would think.”

So would we. So we asked Irish Rail spokesman Barry Kenny what he thought. He told us that “an old legacy booking system did not facilitate the use of discount vouchers online” and he said that Irish Rail recognises this was “a restriction”. A new system being phased in this year is addressing this “and we plan to have refund vouchers available for use for online booking in the fourth quarter of this year”.

And while that is all well and good it is of little use to our reader and all those other people who have – effectively – been short-changed by Irish Rail’s online limitations in recent years.

The second issue is one we have addressed many times. “My girlfriend was travelling to Cork from Dublin,” another reader writes “She had purchased a student return ticket costing €32. Unfortunately she had forgotten her student ID and was subject to an inspection on board. She explained the situation to the inspector but was told she would face a fine of €100 plus the balance of the ticket to bring it up to a standard return – an additional €65.”

She also had her ticket confiscated even though the fine included a surcharge on that ticket so she had had to buy another ticket – €28 – to get home to Cork. “Nowhere that I can see on their terms and conditions does it say a ticket will be confiscated. She was told she has 21 days to pay the fine and can appeal it in the interim and it may be waived. All in, including her €100 fine a return trip cost €225. We totally understand a student ID is required with a student ticket but surely the process of taking the ticket having been fined the balance of the ticket is over the top.”

We asked Kenny what he thought and he said there was “a very clear and simple policy – if a customer has the correct ticket for their travel (with supporting ID where appropriate), there is no issue. If they do not, they are liable to a fixed penalty notice, plus the difference in the fare charged.”

He said the original ticket was retained by the “revenue protection officer” to ensure that in the case of an appeal, the actual ticket used is available to us to assess the appeal”.

He said the company had to fine everyone caught without the right ticket because to adopt any other policy would be “unfair to revenue protection officers and customers alike, requiring a judgment to be made as to whether a person is deliberately fare evading or made an error. Fare evaders fit no profile, therefore the only equitable policy is the one we adopt.”

“I am writing to highlight the somewhat bizarre pricing model used by Irish Rail,” a third query starts. “My 17-year-old daughter was accompanying my father on the 17.45 train from Killarney to Dublin on July 9th. She was seeking a single ticket. My father is a senior citizen. On arrival at the station, she was informed that the single ticket cost €69 and that she needed to book online to secure a cheaper fare. However, this was not possible as first, it was too near the departure time and secondly, neither she nor my dad had credit cards. I wrote to Irish Rail to inquire if she was charged correctly they replied perfunctorily that ‘fares charged at the booking office are set prices as authorised by the NTA’.”

Our reader believes the price difference between online and at a station is “exorbitant. While recognising that tickets not booked in advance will be more expensive, how can Irish Rail justify a 280 per cent surcharge on walk-up fares. In addition, surely this pricing structure is designed to spring a surprise on European visitors used to turning up and buying a train ticket without getting ripped off.”

Kenny was unapologetic. “Fare structures which applies significant discounts to online travel are uniformly common in European railways and beyond – albeit many other railways remove these discounts several days before travel, rather than offer them up to 90 minutes before departure as Iarnród Éireann does.”