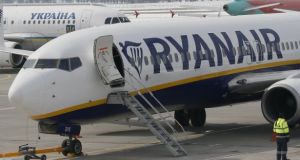 The airline said the move – its second change to hand luggage rules in a year – is necessary to reduce delays. Photograph: Gleb Garanich/Reuters

From Thursday morning, Ryanair passengers looking to bring more than a personal bag on a flight will have to pay a fee.

The airline said the move – its second change to hand luggage rules in a year – is necessary to reduce delays.

In January, Ryanair began a policy which saw passengers who had not bought priority boarding permitted to take a “personal bag” — such as a handbag — on board while a second, larger bag — such as a wheelie suitcase weighing up to 10kg — could be put in the hold free of charge.

But this resulted in up to 120 bags being tagged at boarding gates for each flight, meaning departures were disrupted.

Ryanair has responded by no longer allowing any luggage in the hold free of charge.

All you need to know about our new bag policy, from 1 November 👇 pic.twitter.com/bFKK372eJe

Passengers have to pay €8 to check in a 10kg bag. The previous lowest price for checked luggage was €25 for up to 20kg, which remains an option for those with heavier cases.

The maximum size of “personal bags” allowed on board has been increased by 40 per cent.

Passengers who pay for priority boarding — which costs €6 — will continue to be allowed to take both a “personal bag” and small suitcase as hand baggage.

Ryanair believes some customers may prefer the €8 checked luggage option because they do not want to drag a wheelie case through airport security.

It claimed most passengers will be unaffected by the changes, as 30 per cent already buy priority boarding and a further 30 per cent travel with only a “personal bag”.

A statement on the airline’s website read: “Main benefits of this new policy will be reduced flight delays and cheaper checked bag option. Pack more liquids into a 10kg checked wheelie bag. Walk to the boarding gate hands free.”

Ryanair insists it does not expect to make more money from the new rules, as it will lose revenue from passengers with checked bags switching from the €25 fee to the €8 option.