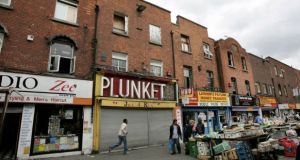 Footfall rates in Dublin city centre are expected to fall by up to 92 per cent for the duration of the Coronavirus pandemic, according to research by business organisation Dublin Town.

On Monday of last week organisation reported the number of people on the city’s streets had dropped by almost 66 per cent as businesses began to shut their doors.

However, following tighter controls on movement and business operations, footfall in the city declined by just over 80 per cent during the week up to March 29th.

Northside shopping streets appeared to be faring slightly better than those on the southside. The decline on Talbot Street was 51 per cent and 62 per cent on Moore Street compared to a decline of 93 per cent on South William Street and 87 per cent on Grafton Street.

The difference was likely down to a higher number of grocery and food retailers such as butchers, as well as pharmacies, on these northside streets, with a dominance of fashion retailers and cafes in the Grafton Street, South William Street area, the organisation said.

Dublin Town chief executive Richard Guiney said the organisation supports the Covid-19 wage subsidy scheme as “an excellent way to maintain employees on the books”. However, he said some businesses remain “nervous” the scheme was “akin to a declaration of insolvency”.

This is despite assurances from Revenue Commissioners chairman Niall Cody, that the scheme is not a declaration of insolvency and instead it should be considered “a mark of honour”.

Mr Guiney said small changes to the scheme could provide reassurance to businesses.

“The nervousness centres on a declaration that they are unable to pay normal wages and normal outgoings, which insolvency experts have noted is akin to a declaration of insolvency. The declaration should be amended so that employers declare that their turnover has reduced by 25 per cent or more due to the Covid-19 crisis and without support they would be required to lay off staff or make them redundant.”

The guidance notes from Revenue should also be amended to state that employers meet the essential nature of the scheme in terms of lost trade.

“Revenue have been forthcoming in providing assurance in private and in media interviews. It makes sense that guidance notes for employers would reflect these assurances and that more employers are encouraged to retain their employees on their books rather than letting them go,” Mr Guiney said.

“Some simple changes in wording could have a profound economic significance and help us all to bounce back more quickly when it is safe to do so.”