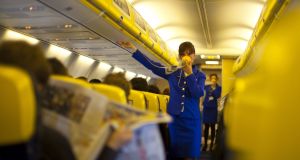 Passengers see us in our Ryanair uniforms and think we are Ryanair and are out to screw them. Sometimes the planes are delayed and we have to explain why, and they’re angry. They are right to be angry, but they are angry at the wrong people.

I see many passengers who have been angry at all the cancellations, and they are right to be angry at them, but we have been badly affected as well. I have colleagues who were on standby and called in. They had to take taxis to the airport at their own expense because public transport was not running. Then they waited three or four hours, after which the flight was cancelled, so they went home, and they won’t get any payment for that at all.

I have friends working in Ryanair’s smaller bases, bases where the number of flights are significantly cut in winter, who have been told that they will have to transfer to other bases in Europe – and cover all the costs themselves – or they will be forced to take unpaid leave for months.

Today I clocked in at 5am and finished at 3pm, with a total of five hours in the air. Those five hours are all I will get paid for even though I was at work for 10 hours

As a crew member I have no base salary and I am only paid for flying time. Today, for instance, I got up at 3am and was in the airport at around 5am. That was one hour before my first flight left. We had our briefings and went to the plane for the safety checks. Then there was the boarding. That is the hardest part, because you have to sort out all the bags and seat almost 200 people, and they are all tired, because it is very early. Then plane takes off, and it was only at that point I start getting paid.

Today I clocked in at 5am and finished at 3pm, and in that time we had flights lasting a total of five hours. Those five hours are all I will get paid for even though I was at work for a total of 10 hours.

Technically we are not allowed to use the public-address systems on the early-morning or late-night flights, but we are given no choice to use them, because we have to sell products to passengers, and if we don’t sell enough we will be disciplined; we will be called to Dublin and forced to explain ourselves.

Today on my early-morning flight the average-spend-per-passenger target was just over €1. If there are 180 people on the plane that means that the four crew have to generate sales of €180. It is almost impossible to reach that target. And they tell us that if want to get back to a base in our home country, or if we want to get promoted, or if we want to swap a day with another colleague so we can go to the wedding of our brother, then we have to reach our targets.

They don’t give us realistic sales targets. That is why on a 75-minute flight we might have three trolley services plus the gift cart plus the scratch cards.

We always bring our own food and water on the planes, but the problem is that sometimes a flight is delayed, and we might be stranded in another base or a country far away, so we will have to pay for sandwiches on board at a cost of €5. And we have to buy the bottled water at a cost of €3.

My base is not so bad, and I think we are lucky, because we are all sticking together, but there are some bases where they are killing each other. Recently we were told that we are no longer allowed to share sales. The way it works normally is that if a crew member has to go to the back of the plane to get something for a passenger the other crew member will process the sale. And we have been sharing the sales to make sure that the people who have to spend longer tending to passengers or getting stuff for them don’t lose out.

But now we are told we are not allowed to do that any more, so that makes the staff fight each other for sales, and it makes them not want to leave the trolley, because they might miss out on a sale. When we raised this with management we were told that Ryanair doesn’t do teamwork: it wants us to compete with each other.

If we call in sick more than three times we can be called to Dublin to explain ourselves, and if we can’t explain then we might be fired. That is the fear

It is also a problem if we call in sick. If we call in sick more than three times we can be called to Dublin to explain ourselves, and if we can’t explain then we might be fired. That is the fear. The atmosphere is just terrible, and there are a lot of people leaving because they know they will earn more money working in McDonald’s.

We can be hired by three different companies even if we are all working for the same company, so it is almost impossible to unite and co-ordinate, but we need some basic points to change.

The identity of the author is known to The Irish Times

– How much do training courses cost would-be staff, and how much do Ryanair uniforms cost?

– Are Ryanair staff’s wages paid into bank accounts in countries of staff’s choosing?

– Who sets sales targets for staff aboard Ryanair planes, and does Ryanair accept those targets are frequently unattainable?

– What sanctions does the airline impose on staff who do not reach sales targets?

– Does the airline make crew pay the full price for food and water on flights even when they are delayed?

We also asked about the demands we were told Ryanair crew are preparing to make and whether the airline is concerned that cabin crew may seek to take some form of collective action to bring about better terms and conditions.

This is the airline’s response in full

“Ryanair cabin crew earn up to €40,000 per annum and enjoy great terms and conditions including job security, a recently-negotiated five year pay deal with guaranteed pay increases, a five on, three off roster (a bank holiday weekend every week), a legal max of 900 flight hours annum (just 18 hours per week), great sales commissions which further boosts pay, free training, sick pay and an annual uniform payment of up to €425. This is why we currently have a waiting list of over 3,000 young people who all hope to join Ryanair’s cabin crew team, at a time when other airlines and their unions are negotiating job cuts, pension cuts and pay cuts. We don’t comment on rumour or speculation, especially when it originates from competitor airline unions.”