About 78% finding costs a burden as financial hit reaches €1,399 per child at second level 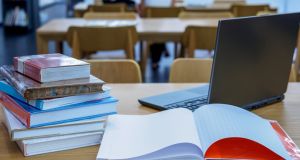 The most expensive item at secondary school level was books at €220. File photograph: iStock

Back-to-school costs are a financial burden for three-quarters of parents and one-third cannot afford some of the school items needed, a new survey has found.

The annual back-to-school costs survey published on Tuesday by the Irish League of Credit Unions (ILCU) has put the cost of sending a child to secondary school at €1,399, up €20 on last year.

The costs associated with primary school children has fallen slightly, down €50 to €949.

One-third of those polled said they were “forced to deny their children certain school items” because they could not afford them, while 78 per cent said extra spending was burdensome, up 11 per cent on last year.

The survey points to a growing demand among young people for branded goods with 54 per cent of parents saying they were coming under pressure to buy branded goods compared with 43 per cent last year.

In general, parents say the biggest sacrifice they make to cover back-to-school costs is family holidays with 43 per cent saying said they would reduce such spending compared with 34 per cent last year.