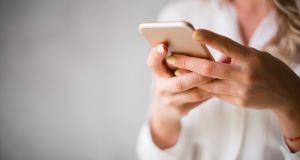 The research suggests that 20 per cent of Irish adults check their phones within five minutes of waking up, down from 27 per cent in 2017. Photograph: iStock

Irish smartphone users may be waking up to the realisation that they are overly reliant on their devices and could be scaling back their usage marginally, although more than one in 10 still admit to looking at their phones more than 100 times a day.

New research from Deloitte suggests that the average Irish phone user picks up their phone 55 times every day – down from 57 times last year.

The company’s annual Mobile Consumer Survey also says the percentage of Irish adults who believe they use their phones excessively has climbed to 56 per cent from 50 per cent.

However, the report – which sought responses from more than 1,000 Irish people – also says 13 per cent checked their phones in excess of 100 times every day or at least once every 10 minutes, assuming they spend eight hours asleep.

The research suggests that 20 per cent of Irish adults check their phones within five minutes of waking up, down from 27 per cent in 2017.

Irish consumers appear to be recognising the over-reliance we have on our devices, and are beginning to make conscious efforts to reduce screen time

It also reveals that 97 per cent of Irish consumers now have access to some form of mobile phone with 93 per cent using smartphones.

All told, 62 per cent of Irish smartphone users make at least one call a day, compared with a global average of 49 per cent, with only 38 per cent of respondents in the UK making daily calls. Our use of SMS, VOIP, instant messaging, email and social media is all above the international average.

Samsung remains the most popular brand across respondents with 32 per cent of the market, and Apple has 29 per cent.

“We have started to see a balancing in our addiction to smartphones,” said Deloitte’s head of technology, media and telecommunications Richard Howard. “Irish consumers appear to be recognising the over-reliance we have on our devices, and are beginning to make conscious efforts to reduce screen time.”

He said this year was also when the phone started to replace cash and cards as a primary means of payment “which highlights how the smartphone has become intertwined into our daily lives”.