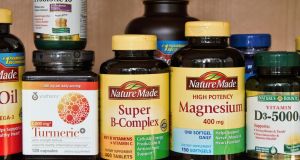 “This is a tax on the health of the people of Ireland,” said the Health Stores Ireland spokesman Matt Ronan. Photograph: iStock

Health stores have reacted angrily to moves that could see Revenue impose a VAT rate of 23 per cent on food supplements including vitamins, minerals, probiotics, Omega 3 and 6 fatty acids and folic acid.

Health Stores Ireland, the trade association for Ireland’s health stores, will on Monday launch a campaign aimed at preventing the imposition of the highest rate of VAT on all food supplements.

He pointed out that many people regularly take food supplements to keep their bodies functioning normally. He cited the examples of pregnant women, who are recommended to take folic acid, and people with anaemia, who need iron supplements.

Currently, the standard rate of VAT applies to food supplements, although the practice of zero-rating vitamins, minerals and fish-oil supplements has applied since the introduction of the tax in November 1972, when the marketplace for food supplements was small.

A spokesman for the Department of Finance said the concession was proving to be “extremely problematic”.

“There are concerns that while elements of the food supplement industry apply the correct rates across non-zero rated products , others seek a competitive advantage by applying the zero rate to products that are properly liable at the 23 per cent VAT rate.”

The spokesman said “protracted correspondence has raised concerns regarding possible non-compliance in the sector, regarding in particular the zero rating of products that should be standard-rated, which may result in a degree of unfair competition between compliant and non-compliant businesses”.

Following consultations between Revenue, the Department of Health and the Department of Finance, reservations were expressed about the implications any change might have on the promotion of food supplements in certain circumstances.

As a result, no legislative changes were made in this year’s budget or Finance Bill. However, following a discussion on the issue during committee stage of the Finance Bill, Minister for Finance Pascal Donohoe said he would ask officials to address this matter in the context of the Tax Strategy Group for next year.