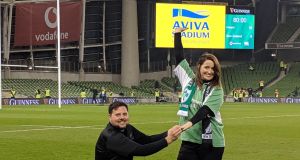 Niamh Mahon, from Dublin, with her New Zealand-born fiance, Rowan Babe, at the Aviva Stadium, on Saturday. “I started crying immediately and I think I might have taken a little bit longer than I should have to say ‘yes’ as a result,” says Mahon.

An All-Black supporter took the referee’s command to engage more literally than most by using the weekend’s big rugby match as the backdrop to propose to his Irish girlfriend.

Niamh Mahon from Dublin told The Irish Times she did not suspect a thing when her New Zealand-born boyfriend, Rowan Babe, suggested they take a walk on Dún Laoghaire pier ahead of the game they had travelled over from London to attend.

She was busy taking pictures of Dublin Bay on Saturday afternoon when she noticed her boyfriend of three years had dropped to one knee.

He had done so on the pretext of taking a picture of her but he had something more enduring than an Instagram post on his mind. He fumbled his first attempt to get the ring he had bought from his pocket but eventually got both it and the all important words out.

“I started crying immediately and I think I might have taken a little bit longer than I should have to say ‘yes’ as a result,” Mahon said. “I was taken completely by surprise but he had the ring bought and sized perfectly. He had done the measurements by holding my hand and comparing my ring finger with his little one.”

The suddenly-engaged couple then went straight to the match, where there was little love lost.

“To be honest we are both very competitive, particularly where rugby is concerned,” she said. “I was joking all the way through that the wedding might be off if the result went the wrong way. At the end of the match, his father pointed out that all of New Zealand now had to pay for our wedding to happen.”

For his part, Babe was a little nervous before he popped the question but as he walked the pier he knew time was not on his side.

“I wanted to get it out of the way beforehand because who knew what might happen afterwards,” he said. “I’m delighted she said yes but I’m gutted about the match.”