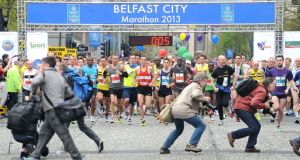 Photographers scramble to get out of the runners’ way at the start of the Belfast Marathon. Photograph: Alan Lewis/PhotopressBelfast.co.uk


There were a couple of surprises at yesterday’s Belfast City Marathon. The first was that the sun came out and it stayed dry all day.

The second was a more personal affair for two local runners. Alistair Ramsey popped the question to his girlfriend Michelle Thompson at the finish line. When she finally caught her breath, she said, “Yes”.

More than 17,000 people took part in the bank-holiday event, which included the full 26.2-mile marathon run and wheelchair race, a nine-mile walk and a three-mile fun run. About 2,000 participants were foreign visitors.

“The support around the course was really strong this year,” said organiser Danny O’Connor, “and the minute’s silence at the beginning, to remember the victims of the Boston Marathon, was moving and poignant.”

There was plenty of colour from both runners and spectators. Holywood model, student and sailing champion Tiffany Brien, running for the NI Children’s Hospice, completed the full run wearing her Miss Northern Ireland tiara.

“It was tough enough, but compared to the marathon I ran in New York and the half- marathon I ran in Rio, it was a breeze,” she said afterwards. “I’m 40 now, so I’m definitely slowing down the pace, but I’m very glad I did it.

“The atmosphere was great, especially the last few miles, when the crowds were really cheering you on. ”

The race was won by Kenyan competitor Joel Kipsang Kositany in a time of two hours, 19 minutes. Fastest woman was Ukrainian Nataliya Lehonkova, who set a new record of two hours, 36 minutes, in what was her debut Belfast performance.

The local winners were Thomas Frazer, originally from Belfast but now living in Chicago, and Julie Balmer, from Bangor, Co Down.

Juvenile to appear in court over serious assault on woman in Dublin city 08:13
Covid-19: Hong Kong locks down thousands for compulsory testing 07:56
Teaching was Jerry Kiernan’s vocation; in 30 years he never missed a day 06:00
Feisty affair on the cards as buoyant Munster welcome Leinster to Thomond 06:00
Pandemic provides golden opportunity for planners to reshape towns and cities 06:00