Wipe the remote, and 9 other tips for a clean, safe and relaxing hotel stay

Be wary of drinking glasses, and don’t put your luggage on the bed if you want to avoid bed bugs 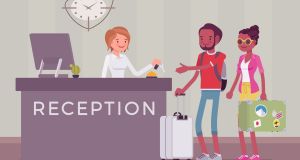 Don’t assume that just because hotel is super posh it won’t have bed bugs. Image: iStock

I’ve lost count how many hotels I’ve stayed in. Hundreds, for sure, and on every continent except Antarctica. From beach-side resorts in St Kitts in the Caribbean, to a grand, soaring high-rise in Tokyo, to a castle-adjacent treehouse on the north coast of Scotland, I’ve stayed in some truly lovely places. I’ve also stayed at dilapidated dives in Vegas with rusty taps and rugs so thin you could see the concrete underneath. The memory of the latter still makes me itch.

Over the years I’ve come up with a set of tips and tricks I use in every hotel, from 5-star to wear-your-shoes-in-the-bathroom-star. They range from a little peace of mind and a reduction of annoyance to maintaining a bit of safety and health while travelling. Starting with …

1. The remote is gross

What is touched by everyone but rarely cleaned? A quick swipe with some baby wipes or a damp (not wet) hand towel should help a bit.

Need to set the thermostat in your room? Twenty degrees Celsius is equal to 68°F - a good place to start.

3. Be sceptical of drinking glasses, especially if the hotel lacks a restaurant

Generally, drinking glasses are cleaned after every guest. Generally. If there’s no on-site restaurant, though, how are they cleaned? By hand presumably, but how well? Give them a rinse and a sniff, at least.

4. Don’t put your luggage on the bed

Bed bugs are gross little vampires. Like mosquitoes, but worse. Putting your luggage on the bed can give them a free ride to your next location … like your house. The luggage rack might not be a good option either, since it’s usually close to the bed. Your best bet is to put your luggage in the bathroom and then give the bed, rack, and chair/sofa a close look. Also, don’t assume that just because hotel is super posh it won’t have bed bugs. They might have more means to get rid of the problem, but it can happen anywhere.

5. Bring long cables for your phone

As the number of devices needing to charge increases, the number of outlets available in hotel rooms … stays the same. I’ve stayed in new hotels with zero easily-accessible plugs. Mind blowing. In most airports you can pick up long USB cables so you can plug in and still, hopefully, use your phone from the bed. Travel power strips are handy for plugging multiple devices into that one outlet you found behind the bed.

6. Yes, you can take the little shampoo bottles. No, you can’t take the robe

Some hotels give the remaining soaps to charities like Clean the World. It’s worth checking if they do, as perhaps that’s a better use of the remaining soap than getting lost in your luggage or forgotten in your home medicine cabinet. Many hotels are moving toward large-bottle dispensers, both as a cost- and Earth-saving measure.

7. Lock, latch, and put out the do not disturb sign

Housekeeping comes early. Exactly 100 per cent of the time I’ve wanted to sleep in and forgot to put out the sign, housekeeping wakes me up. In how many languages do you know how to say “come back later, please?” For me, when woken from a deep slumber, a croaky none.

Enabling the safety latch also lets you open the door to see if it really is management knocking while preventing said knocker from unexpectedly opening the door fully. Exceptionally unlikely, sure, but why take the chance?

8. Take a picture of the safe code

Even if you just use your birthday or something memorable in the moment, take a picture of the number you programme into the safe.

I travel for months at a time. I do laundry about once a week. At an expensive laundromat in Paris I paid €7 for a load of all my clothes. While trapped at a hotel in Fiji during a typhoon I paid $10 for each pair of underwear.

You should definitely pack light enough that you’ll need to do laundry on any trip longer than a week. Some hotels, and nearly all hostels, have inexpensive laundry facilities on-site or nearby. The staff will usually help you find a place. There’s always washing in the sink too, which is free if you have the time.

10. And lastly … Stay in a hostel instead

I’ve spent the majority of nights during my extended travels of the last five years in hostels. Hotels can be great, but they’re invariably expensive. Hostels probably aren’t what you think, and can be a great way to save money and meet new people.

Is ‘sitting the new smoking?' How to quit the sedentary lifestyle
3

We want to build a separate granny flat. Where do we start?
6

Coronavirus: ‘I’ve planned a holiday to northern Italy. Should I cancel?’
8