A lovely walk of sand and stones and sky and seabirds 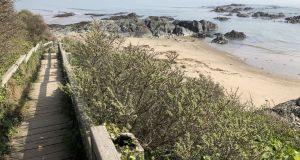 This is a lovely walk of sand and stones and sky and seabirds, and the smell and sound of the sea; and, on the glorious Saturday of my visit, of sun and sea-swimming, and the sight and scent of white wild garlic. The walk follows the coast from bustling Rosslare Harbour to that abrupt “corner” of Ireland, Carnsore Point, noted by the Greek cartographer Ptolemy on his second century map of the “known world”.

Along the way, you will encounter early Christian ruins and a cemetery, beautiful sandy bays, a golf course (for coffee), two piers, eroding cliffs and dunes, lovely sea-washed pebbles, intriguing drowned peat, pink granite boulders, and the great windmills of the Point. But be aware as you go of the darker story of this coast; it was known as the “Graveyard of Ships” for vessels bound for Bristol and Liverpool over hundreds of years of trade with the Americas.

For me, though, on that day its offshore islands, reefs and rocky islets just hung there, threatening nobody, in a shining horizon-less sea.

Though the Slí Loch Garman goes from Rosslare Harbour to Wellington Bridge, I was doing only the stretch to the Point, leaving the long coastal wilderness of shingled shore to Kilmore Quay and beyond for another day. I started at the trailhead for this walk (the RNLI post above Rosslare Harbour) on a newly constructed path of about a kilometre, quickly leaving the noise and intrusion of the port below and behind me.

The path then becomes an informal field edge for a further kilometre or so before depositing the walker on to beautiful St Helen’s, a truly pristine beach despite its built-up hinterland, which is happily hidden from beach walkers. A lovely little wooden step way, at its southern end, took me on to the ruins of an early Christian church and its brambled graveyard of tilting, untitled headstones and clumped marram grasses. Along with Tomhaggard cemetery, this was where many unmourned and unnamed shipwrecked souls were gathered up and laid to rest.

Wander as you will from here, over dunes or on sand or rock, and soon enter Ballytrent, St Margaret’s and Carne beaches, actually one long sweep of sand with only minor rocky interruptions. By now, the great windmills of Carnsore Point will dominate your skyline.

After Carne Pier, the path reverts to a field edge along a shore of boulders and storm-washed platforms of pink granite, and soon enters an elemental world of sky and sea and stone that is the “Holy Headland”, as Ptolemy called it. And despite the rhythmic “swish” of the windmills, a spiritual energy indeed permeates this place.

Perhaps it’s the meeting there of sea and ocean, or something emanating from the immensely ancient underlying rock. Or maybe it’s an echo of druidic and early Christian worship and hermitage there. Or perhaps it’s because of the ghost stories we used tell our kids there, huddled around warm campfires on starry summer nights.

What you need to know

My marriage is boring and polite. How do I make my husband interested in me?
2