Tourists in our own land: the best new things to do around Ireland

From pilgrim paths to Center Parcs, here is a list to help you plan your next adventure 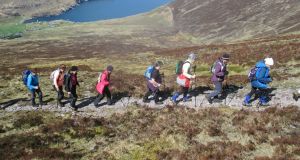 If you are one of them, you may have noticed how our main attractions are becoming a tad overcrowded: the Cliffs of Moher, Trinity College and the Rock of Cashel, among others.

But if you are looking to escape off the beaten track, fear not: new visitor experiences are continually opening to meet growing demand and draw tourists to less-frequented areas. Options for walking, cycling, and exploring the Irish countryside are multiplying, while spanking new visitor attractions are offering opportunities to interact with and better understand the rich tapestry of history, heritage and natural wonders bedecking our island. The emphasis is on high-quality, memorable attractions showcasing this country’s unique features.

So, let us embark on a journey to discover what is new and captivating in Irish tourism.

We are finally waking up to the delights of the Irish countryside. It began with the Great Western Greenway and now greenways are popping up everywhere. Latest to tiptoe on to the scene is Blessington Greenway, where the first 6.5km linking the town with Russborough House has just opened. There are ambitious plans for a 43km route entirely circling Blessington Lake, but the first section is already punching above its modest scale by offering serene lakeside walks and paths through glorious woodlands. You can walk or cycle from Blessington to Russborough House, enjoy a bite in the well-appointed cafe and then retrace your route. blessington.ie/greenway

Located within the beating heart of Irish horseracing in Fethard, Co Tipperary, this new interactive experience recounts the centuries-old relationship between people, place and horse breeding. Racing is in the blood here, and with establishments such as Coolmore and Ballydoyle nearby, there is no shortage of horsey stories, like that of the great Sadler’s Wells. Hugely successful as a racehorse, this renowned stallion went on to sire 12 winners of English classic races.

His skeleton forms a highlight of the exhibition, but the true highlight occurs on Tuesdays and Thursdays when a combined €10 ticket offers admission to the world famous Coolmore Stud. Here, you can get close and personal with such renowned examples of thoroughbred horseflesh as Galileo, Rock of Gibraltar, Caravaggio and many others. The Coolmore Stud tour must be pre-booked. fhcexperience.ie

Despite hosting some of the most ancient penitential trails in Europe, Ireland’s pilgrim paths slumbered for generations. Now they are echoing to pilgrim footfall again because of a new passport for pilgrim walkers, following these ancient tracks.

Those completing the passport must walk five paths – a total distance of 125km – and produce evidence of completing each, in order to receive a pilgrim stamp. When complete with stamps, pilgrims can send the passport to Ballintubber Abbey to receive the Teastas (completion certificate), similar to the Compostela for the Spanish Camino. The paths are: St Kevin’s Way, Co Wicklow; Cnoc na dTobar and Cosáin na Naomh, Co Kerry; the Tochar, Co Mayo and St Finbarr’s Path, Co Cork. pilgrimpath.ie.

Dublin’s newest attraction uses 360-degree sets and live actors, who interact with the audience, to tell the story of Ireland’s troubled and sometimes amusing past. There is a mix of hard history and tongue-in-cheek interludes, with a multitude of characters from different periods of history including St Bridget, master of the paranormal Bram Stoker, Oliver Cromwell’s chief torturer, and Dublin’s own Molly Malone.

Not all the historic details are entirely accurate, but this seems unimportant amid the general mirth and genuine sense of travelling through time. Poorly signposted, this very innovative attraction is located off Thomas Street, to the rear of St Augustine and John the Baptist Catholic Church. vaults.live

This new 53km amenity by the river Suir links the Tipperary towns of Cahir, Clonmel and Carrick-on-Suir. South of Clonmel, the Blueway offers an idyllic cycleway/walkway to Carrick-on-Suir along the riverbank. Originally a busy liquid highway carrying produce from the rich agricultural heartlands of south Tipperary, the towpath used for drawing barges has now been transformed into an idyllic 18km trail.

This park in Co Cork is one of my favourite escapes. Laid out by famous landscaper Capability Browne, there are a series of waymarked walks around the 202 hectares (500 acres) of managed parkland. Available for exploration are lakes, natural woodlands and a deer park with extremely friendly deer that kids will adore.

What’s new is that the great house of Doneraile Court has recently been opened to the public. Home of the St Ledger family, the ground-floor rooms have been lovingly restored. The excellent guided tour gives a great insight to life in the Ascendancy period of Irish history, and then recounts the slow but inevitable decline of Irish stately houses in the 20th century. dochara.com/places-to-visit/castles/doneraile-court-wildlife-park/

Imagine celebrating Ireland’s national holiday not in March but in July. It could have happened, for July 24th is the feast day for a saint who, most likely, preceded St Patrick as a Christian missionary in Ireland.

St Declan is now set to reclaim his rightful inheritance with the re-opening, in his honour, of Ireland’s longest pilgrim path. Finished this year, the new 115km trail links royal Cashel with monastic Ardmore, while touching upon such jewels as Cahir Castle, Mount Melleray Abbey and historic Lismore along the way. Now waymarked and open for individual walkers, St Declan’s Way takes a captivating five to six days to complete. stdeclansway.ie

Undoubtedly the biggest thing in Irish tourism this year is the arrival of Center Parcs to Co Longford with a €233 million investment. Having just opened, it provides 1,000 badly needed jobs in the Irish midlands, while offering accommodation for 2,500 guests in over 400 lodges.

Aimed directly at the family market, the main attraction is a weather-independent, sub-tropical swimming paradise with a glass-covered beach, along with almost 100 activities ranging from tree top walks and ziplining to cupcake making. Be warned, however; prices rise steeply during school holidays, so it may be necessary to sacrifice classroom time to get the best deals. centerparcs.ie

An unforgettable thrill you may not have experienced is whizzing down a mountain bike trail with wind buffeting your face. If you would like to try this, then the new Slieve Bloom Bike Trail is for you. The first section of a single-track trail, which will rollercoaster its way over 35km of the Slieve Bloom Mountains, has just opened above the Offaly village of Kinnity.

Jonathan O’Meara at Mid Ireland Adventure offers a half-day guided cycle. You will visit historic Kinnity Castle and hear the fascinating story of the Kinnity Pyramid on the outward journey. To finish, you then enjoy the thrill of a downhill section on the bike trail as you return to Kinnity. midirelandadventure.ie

Once part of the immense Sadleir Estate, Sopwell Wood and Scohaboy Bog are located close to Cloughjordan in north Tipperary. On offer is a natural woodland and a 70-hectare expanse of raised bog. Bogs are now increasingly important because they absorb carbon from the atmosphere.

Drains have been blocked and invasive species removed, to restore Scohaboy to its carbon-guzzling glory. Visitors are encouraged to see the conservation work on a new loop walk officially opened this year. The trail traverses natural woodland and rustic lanes, along with a new 1.5km boardwalk leading to a viewing platform above the bog.

An ideal start for anyone wishing to better understand the complex ecosystems at work in the Irish countryside, the walk takes about an hour to complete. It an easy ramble that gives an excellent insight into how we can correct past environmental mistakes. coillte.ie/site/sopwell-and-scohaboy-bog

Undoubtedly the epicentre of Connemara tourism, Kylemore Abbey was built by the British industrialist Mitchel Henry in 1868. It is now owned by the Benedictine nuns, and next year they will celebrate their 100th anniversary at Kylemore.

And what a difference the nuns made by developing an attraction that is now the biggest employer in Connemara. The canny sisters have now opened a new visitor experience, “From Generation to Generation”, telling the story of Kylemore in four refurbished rooms using multimedia presentations.

Find out about the tragic love story of Margaret and Mitchel Henry, the duke who gambled away the estate, and Kylemore’s time as an internationally renowned school. kylemoreabbey.com