Adventure weekend in Mayo that’s a bit like the Gaeltacht, but for grown-ups 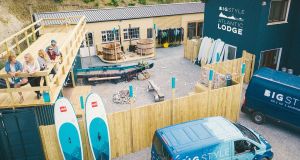 An adventure weekend at the BigStyle Atlantic Lodge is a little bit like the Gaeltacht, but for grown-ups. Swap out the bean an tí for a few shaggy-haired surfers, replace the frozen chicken Kievs with steaming bowls of vegetarian dahl, but keep the water sports and you’re almost there.

The weekend consists of surfing, coasteering, stand-up paddle boarding, kite-surfing and yoga. There are campfire gigs in the evening rather than céilís, and a couple of well-travelled dogs – Mooch and Mara – for company. It makes for an equally exhausting and refreshing 48 hours – the kind those young city bucks dream of in that ad for a certain new brand of lager . . . but don’t roll your eyes just yet.

Built around P Dan’s pub in Killadoon in Co Mayo, the lodge is idyllically located on a hill overlooking the sea, just minutes away from Cross Beach, Carrownisky Strand and Cross Lough. Having skipped Friday night to make a stopover in my hometown of Ballaghaderreen in Co Roscommon, I arrive early on Saturday morning. On the 40-minute drive out from Westport, I had passed Silver Strand, Old Head, Croagh Patrick and Louisburgh, where ferries leave for Clare Island and Inishturk.

I am welcomed with creamy, piping-hot porridge, served with berries, cinnamon, honey, nuts and seeds. There is toast with peanut butter, fruit and cereal too; the first of many delicious meals at the lodge.

Decorated with fairylights and fishing nets, nautical rope and even its very own brightly coloured currach, the lodge is as Instagram-friendly as you could imagine. Most people on the trip – young, on their own and working in cities like Galway, Dublin and Cork – have found the place through the social media site.

BigStyle was founded in 2013 by former journalist and kite surfer Kris Goodbody, and designer and videographer Ben McDonald. The company now runs a stand-up paddle boarding (SUP) hub in Dún Laoghaire, Co Dublin, and a surf and SUP school in Mayo. They also take groups abroad on annual kitesurfing trips to Tanzania.

The lodge itself is a new incarnation of an old idea; BigStyle has been running adventure weekends out of rented houses around Louisburgh for the last number of years, but have finally found a more permanent home. They closed down their original kite surfing school in Dublin last year and moved their base to Mayo, after securing the rental of P Dan’s hotel.

After an extensive refurbishment involving shipping containers, wooden decking, salvaged wood and a lot of grey paint, the lodge opened to guests at the start of the summer, complete with two wood-burning outdoor hot tubs. Accommodation is in modern and comfortable private double and triple rooms, some overlooking the sea, or shared four-bed dorms, with a large and welcoming communal area where meals are eaten together around low tables.

The lodge is grounded by George Kosinski, a Dubliner with a degree in agricultural science and years of experience as a watersports instructor. After our morning porridge, he takes us out for our first activity: a group stand-up paddle boarding competition on Cross Lough.

On the way, he tells me how he has been coming to this remote part of west Mayo since he was a child; his family had a holiday home here in Killadoon, and have been running water sport lessons on the local beaches for years.

Locals are very supportive of the business, Kosinski says; one recently remarked how the place had gone “awfully cosmopolitan” since BigStyle’s arrival just a few months ago.

After a couple of hours splashing and roaring laughing on the lake, the group feels more like a familiar group of friends than an intimidating bunch of strangers. I feel at ease as a solo traveller here; it is a comfortable place to mingle, helped along by George, Ben and Kris, who sit among us, spark up conversation and ensure nobody feels left out.

A substantial portion of the group are French men on a stag, among them a man named François who wishes to be called “Fon Fon” and sings La Vie En Rose without prompt. Although they are consistently tipsy throughout the weekend, the stags don’t disrupt the mellow, switched-off atmosphere which BigStyle boasts. They mix affably with the other lodge guests, all women, either holidaying alone or in pairs.

After the paddle-boarding, we come back to the lodge for a red lentil, coconut and coriander soup, served with chunks of fresh bread and lime. We devour it hastily, still in our wetsuits.

After lunch, it’s back down to Cross Beach for a two-hour surfing lesson, before returning to the lodge again for gentle-flow yoga in a room beside the pub, omming and downward-dogging to the backing track of fist-pumps and roars from the Mayo-Galway game on the big screen next door.

I’m not sure I’ve ever looked forward to a shower as much, so you can imagine the heartbreak when I realise the hot water is gone – and it isn’t coming back any time soon.

It doesn’t take long to forget about that, though; Saturday’s dinner seals the deal on a weekend well spent. Vegetarian burritos are dished up with every side imaginable: black beans, guacamole, smoked paprika lentils, salsa, and coriander rice.

The menu overall is largely vegetarian, served in big communal pots followed by strong, syrupy coffee. I rate the dishes among some of the tastiest meals I have ever had, and this is coming from a woman who only classifies a dinner as a dinner when it includes meat, spuds and two veg. The chef shares some of the recipes with me, and I feel inspired to cook without meat more often at home.

The owners are currently building a pizza oven too, which seems the only way they could make the food any better.

After dinner, we sit around the outdoor fire pit at dusk, listening to a twinkling performance by Dan Fitzpatrick – frontman of Badhands – on the lodge stage. Locals spill out of P Dan’s pub next door to join us, and the BigStyle guys welcome them in, start a conversation and show them around.

When I sneak outside the gate of the lodge to take in the amber hues of the sun setting over the sea, I notice a set dancing class going on in P Dan’s. Such unlikely bedfellows – a hipster watersports hostel and a country music dancing scene – yet somehow it all works – so well.

As a west of Ireland woman, it is sometimes difficult to swallow the marketing by huge corporations of the region as an oversimplified weekend playground for city folk. Having grown up here, we know the real value of the place, the struggles that come with making a living here, as well as the obstacles businesses face setting up in remote, rural locations like Killadoon.

But the people behind BigStyle appear to know this too, and have made a brave move by uprooting their kite-surfing business from its safe Dublin base and taking a gamble on an area almost unserved by public transport and with a tiny population.

The punt appears to be paying off – not just for BigStyle, but for Killadoon too.

Niamh Towey was a guest of BigStyle. Two-night adventure weekends in the BigStyle Atlantic Lodge including accommodation, all meals, activities and equipment cost €230 per person in a dorm, or €260 in a private double room. See bigstyle.ie