Walk for the weekend: Testing trek through the Reeks

Wonderful views on a trundle down memory lane in Co Kerry 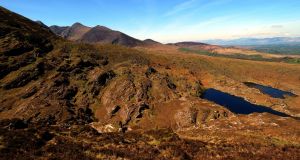 Locha Chaca from the slopes of Cnoc an Bhráca.

Back in the times when walkers were few and tracks and guide books were fewer, the one great gathering of the year was for ‘The Reeks Walk’.

This testing walk started in the car park at Kate Kearney’s Cottage and crossed the Ridge of the Reeks from Cnoc an Bhráca (731m) to Lough Acoose, negotiating the narrow aretes of Coomeenapeasta and Caher as well as seven peaks; a total distance of 16km and an overall ascent of 2,000m. Concerns over erosion eventually brought an end to this great institution.

While there is no longer an “official” endurance trek, thousands of walkers are attracted to the ridges of the Reeks every year. With two large car parks at the mouth of the Hag’s Glen and another one near Lough Acoose as their starting points, Cnoc an Bhráca does not fit into any of the routes commencing from these points; so, one day recently I decided to take a trundle up to that first summit for old times’ sake.

The walk starts some few hundred metres from the Gap of Dunloe car park where a zig-zag track, known as Bothar Corach, brings you up to the 400m contour from where it is but a short walk to the little peak of Struicin (440m).

This small outlier of the Reeks gives a most pleasing prospect of the Hag’s Glen and its encompassing peaks. It is one of the summits that is on my list of “Small Mountains with Big Mountain Views” that I have marked down for my old age when I will be no longer capable of significant ascents.

I took some time to bestir myself from soaking up the wonderful view and to head off in a southwesterly direction towards Locha Chaca which are at the foot of the gully known as Eisc an Bhraca.

I had had half a notion of climbing it as I would have done so back in the days when the sight of a gully drew us like a squirrel to an oak tree.

However, as I got closer I felt that this was not a route I should be recommending in a series such as this so instead I opted to ascend the heathery ground on the east side of the ravine which brought me to Spot Height (721m) and then across the short summit ridge to Cnoc an Bhráca.

From here there is a superb view east to the great bulk of Cruach Mhor (932m) and the Frebahy Ridge, south into the Black Valley and northeast into Echo Lake in the Gap of Dunloe.

A stony path leads down a steep slope from the summit until you reach a new fence which has been erected across the boggy plateau as far as the start of the track.

At the low point on the route there is quite a wet patch and you will need to carefully navigate around the sinister patches of Sphagnum Moss. The final descent down Bothar Corach has the anticipation of sustenance at Kate Kearney’s Cottage.

Start and finish: The car park at Kate Kearney’s Cottage at the northern end of the Gap of Dunloe.

Getting there: Take the N27 west from Killarney. Turn-off for the Gap of Dunloe is 5km west of the last roundabout on the Killarney bypass.

‘The resilience of my children has taken my breath away’
8