Enjoy and discover one of the surviving patches of ancient woodland 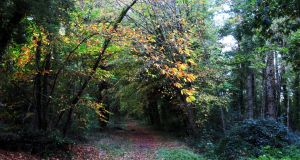 Castleblagh Woods is well-endowed with a wide variety of trees and ground cover.

It is one of my great pleasures every autumn to walk in a broadleaf woodland and revel in the glory of the contrasting colours of the fading leaves. My plans were scuppered this year as ex-hurricane Ophelia got to the woods before me and abruptly hastened the Fall. However, a sufficiency survived to give colour to the canopy and there was the pleasure of crunching my way through the dry detritus on the woodland tracks.

This year I headed for Ballyhooly where the nearby Castleblagh Woods are one of the surviving patches of ancient woodland which is large enough to have regenerated itself over the hundreds of years of its existence. A study of the 1830s OS map showed the woods to be well established and of the same extent as they are today tucked into the foothills of the then bare Nagle Mountains which are now sadly enshrouded in coniferous plantation.

The start of the walk is a combination of the Castleblagh Loop Walk and part of The Blackwater Way. One is enveloped immediately by a woodland well endowed with a wide variety of trees and ground cover. Birch and holly provide the top cover while lower down in the chaotic undergrowth of a mature woodland you will find bilberry, woodbine and woodrush, depending on the season as is the case for the carpets of bluebells, wild garlic, red campions and rosebay willow which create a colourful palette in late spring and early summer. Along the way I came across a stylish track lined with western hemlock.

At the end of the second leg of the track, The Blackwater Way diverges from the loop by means of a switch back path and in an area where way-markers are plentiful and well placed, there is none at this point and one could easily walk past but if you are keeping an eye on the map you won’t go wrong.

The Blackwater Way leads down to a farm and then northwards. After about a 100m I left it to take an unmarked path as I wished to have a look at a section of “An Cliadh Dubh” (The Black Dyke), an ancient linear dyke and ditch which runs across the Blackwater Valley in three sections, the longest being the 25km segment from the Ballyhouras to the Nagles. They occur in other parts of the country; the most well-known being “The Black Pig’s Dyke” in southwest Ulster.

Their purpose was possibly to mark out territory between kingdoms and they are of Iron Age origin. When I reached its location, I walked up as far as the vegetation would allow. In this section there had been no need to cut a ditch as a deeply incised stream cascaded downhill on my right. I returned and rather than retrace my steps I took the road as the woodland was thin on its northern side and there were wonderful glimpses of the Ballyhouras and the Galtees bathed in the autumnal light.

How to get there: Take the N72 Fermoy-Mallow Road. At the Leacht Crossroads 7.5km west of Fermoy, turn left on to the Carrignavar Road.