Brussels: So much more than the sum of its diplomats 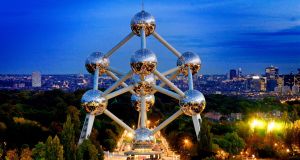 Among the strangest sights in Brussels is The Atomium. Constructed for the 1953 World Fair, it stands at 102 metres high.

It makes sense that most city-breakers will have a predisposed idea of what Brussels is like; there’s hardly a day goes by that the bureaucratic heartland of the European Union isn’t bouncing off the front pages. But while EU institutions and the very elaborate buildings in which they’re housed offer a convincing reason either to visit the city or indeed to avoid it, Brussels is so much more than the sum of its diplomats and in many respects – culinary, cultural, architectural – it remains one of the Continent’s most underrated places to visit.

Brussels is small and compact, with an incredibly decadent centre. Palatial squares and triumphant arches are organised in a tiered slope of grandiosity from the poshest at the top – the spectacularly lavish island of galleries and museums like the Palais des Beaux-Arts and the Royal Museums of Fine Arts – to the riff-raff of everyday life at the bottom of the hill.

There is an abundance of delicious food to rival even the neighbouring French, as well as layer upon layer of deeply significant cultural endeavours to wade through over the course of a weekend at the Belgians’ inimitably leisurely pace.

The city itself is very walkable, being similar in scale to Dublin, and despite excellent transport links throughout it is best investigated on foot. At first, most unassuming tourists will be blindsided by the sheer conspicuous consumption on display in the centre’s bountiful neo-classical architecture, which earned Brussels the accolade of being like a “mini-Paris”, but once beyond the main thoroughfares it’s a much more chilled-out affair.

Though Brussels is probably best known for its painters (Magritte and his merry band of Surrealists draw hundreds of thousands of visitors to the capital annually), it’s all things Art Nouveau that the city seeks to recognise this year, and Brussels is considered to be the Art Nouveau HQ of the world.

Unforgivably, great swathes of the building stock were destroyed in the 1960s, but much of what remains has been beautifully restored. First-time visitors to the city are often struck by the great melange of styles that make up the city’s streets where multi-story Art Deco rubs up against Art Nouveau, Modernist and contemporary buildings, and this is a huge part of its charm – it wears its history so well. Ground floors are often occupied by cafes that spill out on to the pavement, while upper levels offer a glimpse at a continental lifestyle that most of us daydream about.

While there are 19 municipalities in Brussels, most visitors will tend to stick to the most central, such as Ixelles and Saint-Gilles, both of which are film-set ready, as well as Schaerbeek and Koekelberg, but practically all quarters have been marked by the indelible presence of Art Nouveau architecture. This year the light shines on Victor Horta, the father of Art Nouveau in Europe, and his four houses that are now Unesco World Heritage Sites. These offer a remarkable opportunity to step back in time to the bizarre and eccentric, not to mention the incredibly expensive, beauty of the movement.

Victor Horta was born in Belgium’s second city, Ghent, in 1861. Showing very few signs in his early years of the key European designer he would become, his father found work for him on a building site by way of punishment, and it is there that Horta claims he saw his life laid out in front of him.

By the time he was in his mid-30s he had achieved his life goal of building houses that could be considered great works of art on the inside and out. Though his buildings are often thought of as follies, intensely luxurious structures that require years to complete, his understanding of the malleable capabilities of steel and glass has seen these follies take their place amongst the cannon of Europe’s great architectural works.

He paid homage to Japan, China and India, adorning his buildings with colour and light found in abundance in the natural world but far from industrialising Brussels. He pioneered the winter garden – ornate, internal structures of iron and glass built so that a tropical garden, unheard of in Belgium’s drizzly climate, could form the centrepiece of the home.

Horta’s own atelier and residence has been preserved as if he’d just popped out for milk. At 13 floors it’s a lesson in luxury

A freemason, Horta secured 80 per cent of his commissions from men he associated with in the secret society, and given the eye-watering costs involved it makes sense that those who employed him were amongst the richest in the city.

Each home he designed was unique to each owner and specific to their needs – and so their oddness and uncompromising layouts often made them impossible to resell by subsequent generations, leaving them abandoned and subject to demolition. But the homes that remain, sometimes unexpectedly punctuating Brussels streets with their rose-gold murals depicting unearthly goddesses, are gorgeous.

Absolutely not to be missed on any trip to the city are Horta’s four seminal buildings that survived Art Nouveau’s waning fortunes in the mid-century. The Hotel (or Maison) Tassel, the building of which in 1894 marked the first incidence of Art Nouveau in Europe, was abandoned, incredibly, by his family after his death. It has been restored to its former glory and showcases Horta’s first foray into glass and steel structure.

The Hotel Frison is open to the public for the first time in 10 years, having been through various incarnations including a shop and a gallery. It is currently being painstakingly restored by the former Indian cultural ambassador to France, Nupur Tron, and boasts what is thought to be the best-preserved winter garden in the country.

Horta’s own atelier and residence has been preserved as if he’d just popped out for milk. At 13 floors it’s a lesson in luxury: tulips line the William Morris silk wallpaper, and the sun shines through coloured glass encased in French stone; it is simply spectacular – whether Art Nouveau is your cup of tea or not – for the sheer craftsmanship of it.

The last stop, the van Eetvelde house, is trickier to love. Edmond van Eetvelde, another freemason, was adviser to King Leopold II and general secretary of the Congo Free State, and as such it is not easy to separate the impossibly grand home he had Horta design for him – spanning three buildings – from the desperate origins of his wealth. However, the guides are open with this history, present as it is, in every room.

The title of Brussels as the administrative capital of the EU looms large over any attempt to convince people of its value as a tourist destination but this only adds to its pleasure. It’s our little secret. On top of that, as a lot of its art and architecture would imply, it is offbeat and comfortably creative.

The pace on weekends is slow, as if the civil servants departing on Friday night’s Eurostar have taken that heavy weight of European panic with them, leaving everyone else to glide around, sip blonde beers and bask in the surrealness of it all. It is a city that buzzes with European sophistication at night, with an easy elegance showcased in both the city’s bar scene and in the revellers sipping with a carefree refinement that escapes the best of us.

A small city that has always spent a lot of money on ensuring it looks beautiful, there is a lot to take in

For Art Nouveau-inspired wining and dining, visit the fantastically sleek Café Victor, perfectly located in the Bozar Centre for Fine Arts. The dark green granite counter-tops and circular chandeliers offer a great place to absorb the laid-back finesse of the city. To fully indulge in La Belle Époque splendour, the Metropole Hotel is the place to stay to experience true turn-of-the-century Brussels.

Though this year is dedicated to the achievements of Victor Horta, what Brussels offers the city-breaker isn’t limited by any means to coveting beautiful homes. A small city that has always spent a lot of money on ensuring it looks beautiful, there is a lot to take in.

Among the strangest sights, however, is The Atomium. Constructed for the 1953 World Fair, it stands at 102 metres high, and in a city not pushed on skyscrapers it is considered on a par with the Eiffel Tower. It consists of “nine 18m in diameter stainless steel clad spheres connected to form the shape of a unit cell of an iron crystal magnified 165 billion times” – and is highly unusual, a giant cell floating on the Brussels skyline.

The top sphere hosts a restaurant with an epic view of the city, while Brussels school children are invited to sleep over inside the pods to observe the night sky.

In terms Surrealist, there is endless interest, including a Surrealist walking tour of the city and a visit to Magritte’s home where the movement was born, as well as trips to his favourite absinthe-imbibing bars.

For a whistle-stop tour of Belgium’s cultural history, visit the Cinquantenaire Parc, it is mind-boggling in scale and humbling in scope.

Entrance to the Horta buildings can be booked through Horta Inside Out.