Walk for the weekend: A ramble in Goldsmith country

Wander along Westmeath roads where the playwright lived as a boy 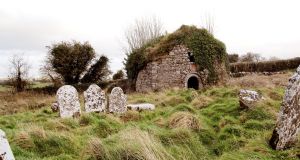 This is a great day walk in fine countryside, all on quiet roads, taking in the highlights of the places where Oliver Goldsmith spent 15 years of his childhood, and which had a strong influence on his writings. The first section is rough, but you can drive this route.

From the centre of the pretty Westmeath village of Glassan walk south and turn right at the end of the street. Soon you will find yourself on a narrow, roughly paved bohereen that somehow has escaped modernisation. It is in fact part of the ancient road to a monastic settlement at Kilkenny West, and little has changed since monks and pack mules passed this way.

To the right is the demesne wall of Waterston House, which is long gone, but look southwards for a strange, pointed structure across the fields: this is an 18th-century dovecote designed by Richard Castle, architect of Leinster House. Note that the demesne wall has many broken down sections. The damage dates to the “big wind” of January 1831, when the trees along the wall were felled.

The bohereen eventually drops down to rejoin tarmac, and goes straight on, up a quiet country road. Passing a green barn on the right, look out for the Pinnacle on the hill to your left, erected in 1769 to mark the very centre of Ireland. It is surrounded by an earthen bank that suggests a more ancient history. A kilometre further on you reach Kilkenny West, the site of a 6th century monastic settlement founded by St Canice. The ruined church, dating from 1839, was built on the site of the church where Goldsmith’s father was rector between 1730 and 1747. Behind the church is a tiny oratory, probably dating from the 15th century, built by the Dillon family.

Continue on straight and take the next left, signposted “The Pigeons”. The road climbs and winds northwards; at the highest point you can glimpse Lough Ree. Shortly after a turn to the right, keep right at a fork: at the corner once stood the alehouse The Three Jolly Pigeons, which features in Goldsmith’s She Stoops to Conquer. Carry on past the end of the road to reach the N55.

Not far away to the left, until recently, were ruins of the parsonage where Goldsmith lived as a boy. His memories of this area later inspired his works The Deserted Village and The Vicar of Wakefield. Cross the N55 and continue along the narrow road on the far side. Just past the junction on the right was the site of the school where Goldsmith and the other children gazed at the teacher:

That one small head could carry all he knew.”

Six hundred metres further on, some stones of the “busy mill” of “sweet Auburn” can be found down to the right just before a sharp bend. Our route winds on past busy farmyards: take the next left onto a narrow road called “the New Line” and at the next T-junction turn left again. Meeting a busy road, turn right and go right again at a fork to take you through the neat hamlet of Tubberclare. Four hundred metres past the church turn left on to another ancient road, called Bohereen na Saggart, or the little road of the priest. The first part has been modernised and lined with modern houses, but the road narrows suddenly to a wonderful narrow leafy laneway that continues between stone walls hung down with willows, herbs and wildflowers.

Too soon civilisation is reached again as the bohereen widens and our route goes left at the next junction. To the left, soon you will see Harmony Hall, a fine 18th-century house. An early owner named Higgins was a drinking, gambling man who bet his friends he could jump his horse over the demesne gate, but the poor horse got caught on the top and Higgins was thrown to his death.

A turn right at the next junction will take you back to Glassan.

Getting there: Glassan village is on the N55, 9km north of Athlone.