The surreal wonders of the Giant’s Causeway

Walk for the Weekend: if you are lucky to avoid the crowds, the world famous landmark is worth it 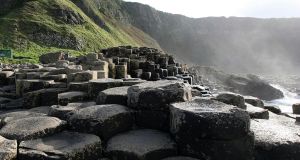 Giant’s Causeway: In the company of 37,000 mostly hexagonal columns that were created by rapidly cooling lava 60 million years ago, I sit and absorb the otherworldliness of it all. Photograph: Paul Faith/PA Wire

I don’t really care for the Giant’s Causeway. Maybe my standards are oppressively high but, by comparison with other World Heritage Sites, the place sometimes seemed to lack a human storyline. No uplifting account of stone age farmers raising a great burial chamber to honour the sun as at Newgrange or medieval monks going to the end of the earth to glorify God at Skellig Michael. Then there is the fact that the Causeway always seems so infernally overcrowded, while the deeds of Fionn McCumhaill have long ago been cliched to death.

So, I avoided the causeway for years. Recently, however, I was back on a sublime April evening as the hordes of day-trippers departed. After a tasty repast in the remarkably atmospheric Causeway Hotel, I went on the rocks.

Beyond the tunnel to the right of the visitor centre, I descended with an, odd to behold, boulder to my left that is referred to as the “Camel’s Back”. Beyond lay Donegal’s Malin Head, the northernmost place in Ireland; so, I was now walking east while looking north at the south of Ireland. It is thus how the complexity of Irish history has convoluted geography.

After 20 minutes I reach the causeway and find myself alone with the stones. In the company of 37,000 mostly hexagonal columns that were created by rapidly cooling lava 60 million years ago, I sit and absorb the otherworldliness of it all.

Then, it is on through a gap in the basalt to Port Noffer. Here, a large rock marooned on the stony beach has been dubbed the Giant’s Boot, while the surrounding basalt columns have been christened the Organ.

Swinging right, I ascend a steep path known as the Shepherd’s Steps to the clifftop. Then, comes a wow moment: the sun slowly drops in a fiery globe to drown itself spectacularly in the aquamarine northwestern ocean. Spectacle gone like a ship in the night, I tag the clifftop above the remarkable amphitheatre of Port Reostan to reach the Chimney Tops viewpoint.

Beneath lies Port na Spaniagh, so named because local folklore held, the Girona – largest galleon of the Spanish Armada – foundered here with loss of 1,300 lives. In 1967, divers from Belgium proved the tradition correct when they discovered the Girona and removed many priceless artefacts to the Ulster Museum. Gazing down in the crepuscular light, I can’t help wondering when those on board realised their fate. A northwesterly gale was ensuring the Girona would not make it safely around Fair Head and it must have been blindingly obvious they were about to perish on this breath-taking but cruel shoreline.

It is a disturbing thought as I return along the clifftop passing above the Shepherd’s Steps in the gathering dusk with the lights of Portrush firing up the horizon. Pausing over the black basalt columns, it occurs to me that here is by far Ireland’s most insanely evocative coastline. This means, of course, that I must take back something I said earlier for I don’t really dislike the causeway. Actually, I love its surreal atmosphere – it’s just the crowds I can’t abide.

The Giant’s Causeway is located on the B147 Causeway road, Co Antrim. It is two miles from Bushmills and 13 miles from Ballycastle.

Note: Parking onsite costs a whopping £11.50 per person. With a full car you may wish to park in Bushmills and take public transport. After 6pm parking is free at the Causeway.