Hong Kong: making the most of a 36-hour stopover

With direct flights from Dublin, Hong Kong is nearer than you think 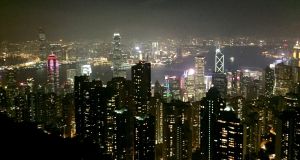 My friend Noreen Rice was not only one of Ireland’s best artists but also the most cosmopolitan person I have ever met. She used to tell me stories of reading War and Peace in her cabin while sailing to Hong Kong in her youth and many years after her return home from the Orient she could still whip up 10-course Cantonese feasts in her Co Monaghan kitchen. Sadly she passed away two years ago but I know she’d have a smile on her face if she knew that her month-long voyage to the South China Sea in the 1950s will take, from next June, under 13 hours when Cathay Pacific start flying direct from Dublin to Hong Kong.

Speeding into Kowloon from the airport recently, in a retro red taxi that would make Wes Anderson swoon, I wondered how Hong Kong had changed since Noreen’s sojourn here. Super-sized apartment blocks that could easily accommodate the residents of a large Irish town lined the motorway giving way to hundreds of skyscrapers including our 42-story hotel in Mong Kok, the world’s most densely populated neighbourhood.

The Cordis Hotel’s rooftop pool soon put paid to our jet lag. This art-stuffed hotel offers every amenity imaginable including daily t’ai chi classes and an airport-style lounge with all-day dining options; it felt like we had been dropped into the pages of Wallpaper magazine. Our bedroom on the 39th floor had cinematic views across the peninsula to the ship-filled harbour in the distance. We would have been very happy to sit there all day with our mouths agape but a 36-hour stopover in Asia’s Manhattan doesn’t allow time for hanging about.

Christine, my wife, worked here in the 1990s and she led me and our son Dash to the Ladies Market nearby to haggle with seasoned stall owners over fake Lego figures, iPhone covers and Swedish backpacks. Time was ticking so we didn’t quite do justice to adjoining Sneakers Street and Electronics Street. Seconds later we found ourselves in another taxi racing downtown past multiple Armani stores that seemed to mushroom ever larger with each successive block.

A very different Hong Kong awaited us at the colonial era Peninsula Hotel where we had a booking for its famed afternoon tea. Wes Anderson would also like the Peninsula. The lobby feels like a film set with white uniformed bellboys in pillbox hats welcoming a constant stream of Rolls Royce alighting guests. Whatever we paid for the tea was worth it; this is a front row seat for Hong Kong society watching. A jazz band kept time with the waiters as they raced back and forth across the carpet delivering cakes and tea at speed. Everything moves fast in Hong Kong.

The Peninsula Hotel is almost directly across the road from the Star Ferry terminal and for 35 cents we soon found ourselves aboard one of the top 10 ferry crossings in the world. Dusk was setting and the skyscrapers of Hong Kong Island began to light up in acid stripes. The distinctive zig-zag lines of the Bank of China edifice flashed in neon and the whole city underwent a Blade Runner-like transformation in the time it took to cross the harbour.

Some 20 minutes later we were at the Peak, the highest mountain on the island with vertigo-inducing views across the city. A funicular railway had brought us to the viewing platform at the top and rather luckily our arrival coincided with the 8pm Symphony of Lights firing up the city below.

Exhaustion set in and our nine year old provided a convenient excuse to miss out on the dozens of bars in nearby Lan Kwai Fong. Instead we taxied back to the Cordis Hotel and found a noodle house for dinner in the Langham Place mall next door. Every restaurant was stuffed with locals on their iPhones. Eating out is the national pastime in Hong Kong as many people live in tiny apartments, often without kitchens.

The next morning we donned the hotel bathrobes and headed straight to the roof for another swim with a view across the skyscrapers to the distant hills somewhat obscured by rolling smog. The pool boys brought us green tea while we wallowed in the hot tub, Ireland seemed very far away.

Crossing a street in Hong Kong is almost an event in itself, hundreds of people gather at both sides waiting for the lights to turn green giving you some idea of how many people must live here. We had found our way back to the market area this time in search of Tung Choi Street or Goldfish Street as it’s more commonly known. Feng Shui is still big news in Hong Kong and apparently an aquarium in the corner of your tiny apartment guarantees good luck. The locals flock here for their lucky goldfish and every shop seemed to have a small coral reef’s worth of tropical fish displayed in bags outside their doors.

A detour into a wholesale fish market at a corner would have been a lot more enjoyable if we had been wearing wellies given the amount of melted ice sloshing around the aisles. Every sort of fish imaginable squirmed and flailed in white plastic coffins knowing their little gills wouldn’t gasp for much longer.

After 10 minutes of searching for the stairs to the market’s first floor food hall we gave up and instead joined the queue for a somewhat unpromising looking Dim Sum place a few doors down the street. Despite its appearance Dim Dim Sum turned out to be the highlight of our short visit to Hong Kong. We made friends with two old ladies at the next table who ordered us a selection of their favourite dumplings. A steaming bamboo basket arrived in seconds containing Piggy Custard Buns and gleaming Har Gow shrimp dumplings. Anthony Bourdain would have been impressed. 7-Up served with a salted, preserved lemon added to the foodie adventure. Dim Sum, also known as Yum Cha (drink tea), was originally served as a series of snacks to accompany your cup of tea but in the intervening decades has become something of a main act on the culinary stage.

We almost but not quite regretted our amazing meal at Dim Dim Sum when little under an hour later we found ourselves at the Pier, Cathay Pacific’s new Business Class Lounge at Hong Kong airport. Still full from lunch we had to reluctantly give the lounge’s noodle bar a wide berth while settling instead for some green tea artfully brewed in its serene teahouse.

Flying onwards to Melbourne I glimpsed the lights of the city below and some of the 261 islands strewn across the territory. I hadn’t bought a tailored suit or blown our cash at the Happy Valley Racecourse, instead our brief visit to Hong Kong offered us a tantalising taste of one of the world’s great cities and an insight into a culture that is still as vibrant today as when Noreen sailed here all those years ago.

Stay: The Cordis Hotel in Kowloon is an affordable 5-star offering with a roof-top pool and incredible views right in the middle of the market district. cordishotels.com

Eat: The Peninsula Hotel for afternoon tea is a must. Arrive early to avoid the queue. Afternoon tea for two people €70. peninsula.com

Visit: The funicular ride to the top of the Peak is the second most popular attraction in Hong Kong. Arrive in the evening to watch the light show below. A return trip costs €9. thepeak.com.hk