The cheapest place to holiday in Europe this year 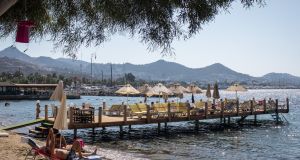 Enjoying the sun at Bodrum, Turkey. The slump in theTurkish Lira is proving a boon for euro zone tourists. Photograph: Chris McGrath/Getty Images

Turkey is back on the menu in a big way for Irish holidaymakers and the slump in the value of the Tukish lira since the start of the year will only make the country more popular in the weeks ahead.

A room in a decent four-star resort hotel can be found for as little as €25 per night this year, while the cost of food and wine has plumented for euro-carrying tourists.

The lira has lost around 20 per cent of its value against the euro in recent months and although the slump has given economists the jitters, there is delight in the Turkish tourism sector.

It is a certainly sector in need of some delight. Turkey lost a huge amount of business to Greece and Spain in the wake of terror attacks and a mid-summer coup attempt in 2016 which sent holidaymakers packing in their droves.

The numbers are stark. In 2014 36.8 million tourists travelled to the country with a slight reduction recorded a year later. In 2016 the number travelling slumped to 25.3 million but now people appear to be returning to the Turkish beaches and the tourist authorities there are optimistic they will break visitor records this year.

“We have seen a huge pick up in interest in Turkey this year and the numbers travelling there are way way up on 2017,” said the managing director of Sunway Travel Tanya Airey. “We are up at least 25 per cent compare to last year although I have to say that we are not even close to where we were in terms of numbers four years ago.”

She told The Irish Times that Turkey represented excellent value for Irish sun worshippers. “When people started travelling to Spain and Greece in larger numbers that put pressure on accommodation and saw prices climbing. And in Turkey now a four-star hotel can be found for around the same price as a two-star apartment in Lanzarote,” she said.

Ms Airery said that while the current situation “is an added bonus Irish tourists travelling to Turkey” it has long been “ a really good value and really affordable destination.”

It certainly seems that way. The price of a bottle of local beer in a pub in popular tourist resort is less than €2.50 while a bottle of locally sourced wine can be found for less than €5. Water cost just 70 cent a bottle, while a main course meal in a restaurant will set tourists back around €6.50, with the price doubling if  a starter and dessert are added.

While tourists – most notably from Germany and Russia – are returning this year, prices will take longer to reach the levels they were before the slump. Tourism Minister Numan Kurtulmus said recently that many hotels had been too hasty in slashing their prices after the terrorist attacks and he suggested that it would take until 2019 for room rates to return to normal levels.

“Turkey will see 40 million foreign visitors and its income will climb over $30 billion by the end of 2018,” the Association of Turkish Travel Agencies President Firuz Baglikayaa told the Anadolu Agency last month.