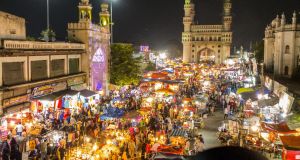 A night bazaar in Hyderabad.

There’s barely time to take in the size of the mirror-panelled headquarters of ICICI Bank in Hitech City housing 22,000 employees – it’s so humongous I have to cross the road to get any sort of a picture – before I see its opposite: a tarpaulin home, held up by sticks, on the street corner equidistant between ICICI and the equally giant-sized Microsoft HQ further down the street.

Visitors to India won’t be shocked by the deprivation; sadly it’s common enough that after a few days, Western abhorrence gives way to a burning desire for change. But the contrast between this family’s makeshift home and their backdrop of future-forward international HQs from Google to Amazon to Facebook makes this a sight that stays with me.

It’s an extreme of the old-and-new contrast we see in Dublin, where the gated European HQs fit snugly among the charming cottages of Ringsend, the residential part of which remains aesthetically unchanged. But, as Dublin well knows, a large influx of global companies can shape a city, so I’m interested to see how it’s changed Hyderabad, the capital of the recently formed state of Telangana.

Clearly, it’s a city in flux. In 2017, 17 years after Bill Clinton visited to galvanise businesses to the area (at that time, a mass of wasteland), his wish came true as the World Economic Forum named it the world’s most dynamic city. Commerce is everywhere around Cyberabad – the semi-official nickname for Hitech City, made up of almost exclusively IT firms and international HQs – thanks to a tempting mix of cheap land, tax incentives, clear and user-friendly city laws, and skilled workers. There’s decent weather too; while much of India is privy to its monsoons, Hyderabad escapes the worst of them, making it ideal for year-round industry . . . and tourists.

Before its industry grew, Hyderabad was famous for long-standing attractions like gemstones and pearls. Even now you can buy a certified necklace and earrings for about €50 from one of the many jewellers in the Punjagutta area. And Golconda Fort is a beaut. There’s much to explore around the 13th-century complex, part-fort and part-residence for Persian royalty. Of course, I pick the middle of a sweltering day to hike to the top, which rewards me with rare quietude and 360 views of the city: the hustle and bustle of the Old City, contained within city walls and, in the distance, the sleek buildings of the new city.

The fort was an interactive museum before such things existed. The clapping portico allows sounds made in its centre to be heard at the top of Golcanda Hill, and the Whispering Gallery is an area where you talk into a corner and be heard as clear as day by a friend in the opposite corner. Elsewhere, the Queen’s Palace is well preserved, and provides an impressive backdrop for a lively 15-minute light show every evening.

Further west, Chowmahalla Palace is a series of eastern-style buildings fit for royalty, renovated to exacting standards. Of special interest is the sword collection, intimidating even if contained to the walls. Then there’s Charminar Mosque, which contains the same exquisite charm of the Taj Mahal, placed at the very centre of Laad Bazaar, providing a remarkable backdrop to bangles, clothes, toys and nick-nack shopping.

The cuisine is also an enduring attraction. Most famously, Hyderabad is where the modern-day biriyani was popularised. Designed as a one-pot dish for travelling Mughals in the 16th century, it contains layers of raw meat, vegetables, spices and rice cooked altogether. With fire underneath and embers laid on top, it heats through in its own steam, creating a flavourful meal. I try it twice: once in the high-end Dum Pukht Begum as part of a mind-bendingly beautiful meal showcasing traditional Hyderabadi food (also on the menu are hara kebabs, lotus roots, and the first white lentil dal I’ve come across), and again at Paradise, a famous fast food-style cafe where it costs about Rs300 (€3.50). Yes, it tastes just as divine, and no, I do not get ill afterwards.

Nowadays, Hyderabad’s traditional draws are only part of the reason it has an increase in visitors and a growing population – 8.7 million at the last count in 2014. The city is custom-made for those who want to move on from the call centre capital of Bengaluru (formerly Bangalore), country-dwellers seeking the affluence of city life, and media types who come to work at its many local and national TV, print and radio outlets. In 2006, the government ringfenced a section of land to create affordable housing for staff, now called Journalists Colony. Isn’t that a fantastic idea?

On the outskirts of Cyberabad lies the cosmopolitan twin areas of Jubilee Hills and Banjara Hills, arguably the Ranelagh and Rathgar of the city. While there’s not a Starbucks in sight, thank heavens, it feels westernised when cruising down Jubilee Hills on a Saturday night, as lively patrons spill out of bars like Dock 45, the craft beer emporium of Froid, and its sister hang-out Heart Cup Coffee (where they serve more than coffee).

The restaurants, too, speak of new affluence. United Kitchens of India, on the same strip, is the go-to spot in the area. And hidden away on a residential street, Tales Over Spirits is especially interesting for repurposing traditional Indian street food of pao vao (a spicy, sloppy mix inside a bread roll) for an India twist on burger and chips; the pulled tandoori chicken gotala served with fried green chilli fries is something to write home about.

These mod cons provide another reason why more visitors are including Hyderabad in their travels around India or, as my guide points out based on his recent clients, if they’re coming for business, they stay longer for pleasure.

The broad textures of life in Hyderabad is particularly appealing, as the city rivals Delhi and Mumbai for its sensory overload. At one intersection as horns beep all around, a car reverses on to the main road from one side as two motorcyclists ignore the red light and swerve around them, then immediately slow down for the pedestrian who’s gormlessly walking through all this.

There’s not much quietude in a pulsating city like this, but an evening walk around Necklace Road – so called because its row of lights come alive at night and sparkle in the lake that it surrounds – shows another side to it.

Comfortable hotels provide the most effective sanctuary and, thanks to the number of business visitors, there’s plenty of choice. Decent rooms start from €35 but even five-star hotels are reasonably priced. I revelled in my stay at the opulent ITC Kohenur, a steal at €160 a night for generously sized rooms decorated with fusion-styled furniture and subtle nods to the famous diamond that gives the hotel its name.

ITC, a Unilever-type conglomerate, was the first company of its size to become carbon positive. There’s a great relief in knowing you can whack up the air-con as the energy is derived from windfarms, or that an extra-long shower later provides nearby farmers with much-needed water.

It seems across the board, the revamping of the city has improved life in Hyderabad, and certainly expedited its progress, but the real answer lies with its existing residents. As it is, there was a sparse amount of residents beforehand, negating that issue and differentiating it from Dublin’s Silicon Docks. Original residents in villages like Gachibowli found their land skyrocket in value (to 70 times the value before 2000, according to my local guide). And, if they didn’t cash in, they found that footfall for their stalls increased.

Of course, there are growing pains. Traffic in Cyberabad is difficult at all hours of the day, thanks to the 24/7 nature of shift patterns. Aesthetic value seems to have been forgotten in a quest to build megabuilding after megabuilding. And yes, poverty that’s rife in India is no different here. But as a fast-rising Indian destination that’s managed to strike a balance between delivering amenities for pampered Westerners like myself, and growing as a lively city for its newly settled residents, and remaining a place of historical significance, Hyderabad’s title as one of the world’s most dynamic cities is no hyperbole.

Shilpa was a guest of ITC Kohenur Hotel (itchotels.in), supported by Jet Airways (jetairways.com) who fly to Hyderabad via London Heathrow from €460.