Why do we dunk biscuits into tea?

Now We Know: Answering the food and drink questions you didn’t even know you had 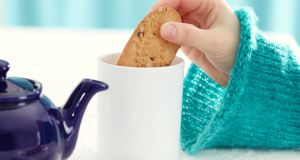 To ensure the perfect dunk there are a few important points to consider. Do you have the right sized receptacle and is the beverage at the optimum temperature?

The act of dunking a biscuit into a cup of hot tea awakens a level of comfort in the biscuit-dunker that is the culinary equivalent of curling up on the sofa with a hot water bottle. There’s an instinctive draw to dunking your biscuit in a hot beverage, and it’s not hard to believe that humans have been doing so since we had biscuits to dunk and tea to dunk it in. What have been some famous dunkers and dunkees throughout history?

Naval life in the 1500s included an allowance of hard tack, a simple cracker that sailors lived off. They were ideal for long voyages, and it’s thought that the bakers of the time made these biscuits as hard as possible to make sure they would maintain their crunch after long periods, often years, in the high seas. They were sometimes known as “tooth dullers” and “molar breakers” on account of their hardness.

To moisten the hard tack sailors would dunk them in brine or coffee to soften up the biscuits. Centuries before hard tack, the Romans were dunking unleavened wafers into wine. It’s believed that the word biscuit comes from the Latin “bis cotum” which means twice baked.

Dunking has a place in cultures the world over. In Italy today deliciously crunchy biscotti are served on the side of cappuccinos. In parts of India sweet and salty osmania biscuits are dunked into chai. In the USA chocolate chip cookies are dunked into milk.

To ensure the perfect dunk there are a few important points to consider. Do you have the right sized receptacle and is the beverage at the optimum temperature?

Are you in the right company? After all, it can be seen by some as bad manners to dunk.

Perhaps most important is the relationship between the biscuit and the beverage, and the dunking time.

In the late 1990s, Australian scientist and writer Dr Len Fisher conducted an experiment with colleagues in Bristol University physics department to analyse the intricacies of dunking.

“If recent market research is to be believed,” wrote Dr Fisher on FirstScience.com, “one biscuit dunk in every five ends in disaster, with the dunker fishing around in the bottom of the cup for the soggy remains. The problem for serious biscuit dunkers is that hot tea or coffee dissolves the sugar, melts the fat and swells and softens the starch grains in the biscuit. The wetted biscuit eventually collapses under its own weight.”

This painful calamity is a tragedy that many of us have experienced first hand.

So what’s the optimum time for a conventional biscuit dunk? Dr Fisher recommends something between 3.5 seconds and 5 seconds.

When it comes to dunking biscuits into tea, I personally believe that perfection lies in alternating between the highly-absorbent Rich Tea biccie and the ultra-crunchy Ginger Nut.

Irish conductor the first woman to lead orchestra at Oscars
2

Hilary Fannin: What I wish my spouse and I had done the morning of our wedding
4