Train reaction: Why I’m encouraging my son to go Interrailing 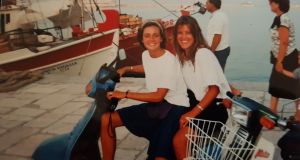 Forget material things and pricey possessions, there is nothing better than seeing the world. My parents always travelled to far-flung places so I picked up the travel bug from a very early age, but it wasn’t until I was in my teens that it began in earnest with a six-month jaunt around Europe on an Interrail ticket.

In a time before mobile phones to keep in regular contact with home (or more likely vice versa) and the internet to purchase tickets, accommodation and crucially receive a transfer of funds, a friend and I headed off without a care in the world.

And while we had plenty of adventures, we arrived back in one piece and without a doubt hugely enriched from our experience.

Which is why I have encouraged my 18-year-old to apply for a free Interrail ticket to do some exploring of his own this summer. The EU-funded pilot scheme, called DiscoverEU, allocated almost 30,000 rail passes to 18-year-olds across the 28 EU member states and the latest lucky winners will be announced this month.

But regardless of whether he receives a golden ticket or not, this is one trip he and every young adult should experience, at least once in their lives.

I was barely 19 when I set off with a backpack, an agreed (but very limited) budget, the ever-important train ticket and a thick tome containing the train timetables of every service across the continent.

The very notion that we had to carry a book around in order to check when trains would be running must seem like a ludicrous concept to teenagers today, but it stood us in good stead for our entire journey.

Before setting off we agreed on a financial plan which laughably was £10 per day (or whatever currency we were using at the time, because of course there was no euro). This meagre fund would cover everything including accommodation, food and “going out money”.

We decided from the outset that our diet would be very basic so we lived for the entire six months on bread and cheese – not a bad option, I hear you say – and no it wasn’t, apart from when we economised by buying a block of hard cheese in Czechoslovakia and it lasted for three weeks. Just imagine the reality of cutting off a wedge each day to have with a hunk of bread after it had been in and out of bags and on and off trains. Needless to say, we were more than happy when we finally finished the block – it was such a milestone that I marked it in my travel diary with an asterix: “*Finished Czechoslovakian cheese today.”

With a vague travel plan which regularly changed with the weather or the chance of meeting a potentially interesting or fun travel companion, we covered pretty much every country in Europe.

Although, we didn’t make it to Poland as we didn’t have the correct visas. Mind you, the jury is still out as to whether or not this was actually necessary as the guard on the train would only accept a fee (bribe) of American dollars and duly kicked us off our Russian-bound train (we were sharing a double bunk carriage with two elderly Lithuanian women who were outraged on our behalf) at 2am – leaving us to sit on an outdoor platform bench (the rural station was shut for the night) until the following morning when the return trip was scheduled.

We also had a hairy moment in the former Yugoslavia after deciding to head to the coast for a few days. After boarding in Belgrade and entering a carriage, we were literally poked, prodded (and worse) by our fellow passengers. Women laughed while the men took liberties and teenage girls scowled and hurled what we can only assume were insults at us.

It was just before the civil war started (1990) and people were obviously not in the kindest of moods, so while the train sat idle on the track just outside the city, we took the opportunity to escape and (stupidly) walked back to Belgrade along the verge.

Once in the metropolis, we tried to call a friend in Macedonia to say we would be arriving sooner than expected, but discovered that the coins we had received in the bank (no mobile phones remember) were in fact, fake and when we went back to complain and try to change our recently purchased dinars back to pounds (we wanted to get out of the country as fast as possible), every teller pulled their blinds down and ignored us.

We left the city as soon as we could and, unsurprisingly, I have never had the urge to return.

But throughout the six months, these two incidents stand out as the only negative moments of the entire trip (apart from a minor incident with a moped and couple of close shaves in Morocco as we garnered quite a bit of attention as two young girls travelling alone).

We visited all the capital cities and a few others besides and factored in plenty of beach time in Turkey, Italy and Spain as well as spending two months island hopping in Greece, which was fantastic – particularly as we had arranged to meet a group of friends from London there. So pre-mobile phones, we picked the date and location out of a hat several months beforehand and agreed to meet outside the police station (because we figured there had to be one in every town).

Seeing everyone converge on our randomly chosen day was such a buzz and it really shows how reliant we have become on the internet and social media as these days we communicate right up to a few moments before to ensure everyone has the right spot, day and time.

Throughout the trip we had so much fun, gained a huge amount of independence, learned how to fend for ourselves as well as a great deal about other cultures and languages (making a point to learn a handful of phrases for every country we visited so as not to presume people spoke English) and ignited the travel spark, which has been burning ever since.

It was such an amazing experience that three years ago, I took the family on a mini Interrail trip for three and half weeks around Europe. In many ways it was different as with only a limited amount of time and five people to cater for, I booked trains and accommodation in advance so this took away some of the spontaneity I had enjoyed myself as a teenager.

But it was still a fantastic holiday for my three boys who experienced a plethora of different places, people, food and culture – and the diversity of the trip made it feel as if we had been away for several months.

It also gave them the confidence to venture out on their own, the taste for experiencing other countries and reinforced the open-mindedness and tolerance which is inherent in every intrepid traveller and which is in danger of disappearing in certain sectors of society.

So with this in mind, whether he wins a free rail pass or not, I will continue to encourage my 18-year-old and his brothers to explore the world, broaden their minds and enrich their lives with experiences rather than tangible objects.

The new year is here, and with it, a whole world of opportunity awaits so now is the time to get planning. Bon voyage.

How do you get bereaved fathers to talk? Bring a football
5

Yotam Ottolenghi: How to turn yesterday’s bread into a feast
6

Housing crisis: ‘We must avoid any kind of knee-jerk reaction’
8