Trying to book a Dublin hotel: the five-star is the best value

Amid rising Dublin hotel prices, we went searching for a bargain. No joy 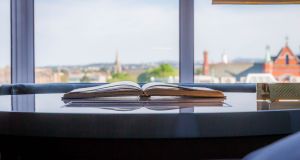 The five-star Conrad Hotel arguably offered the best deal: €270 for a Saturday night

Yet again Dublin hotel prices have been shown to be rising substantially. The annual Crowe Horwath hotel industry survey shows the average room rates in Dublin rose by almost 15 per cent in 2016 and stands at €128 for Dublin up from almost €112 last year and ahead of the previous record in 2006 of €121.

Prompted by these findings, The Irish Times conducted its own snapshot survey of six Dublin hotels – three-, four- and five-star – and found that prices vary substantially from the averages in the more scientific survey.

The five-star Westin in Dublin 2 was the most expensive hotel, with a standard midweek rate of €460 per night.

But, star ratings are not always the best indication of value. The five-star Conrad Hotel on Earlsfort Terrace, Dublin 2, arguably offered the best deal for a weekend trip to the city, with a Saturday night rate of €270.

The cheapest was the three-star Academy Plaza Hotel off O’Connell Street, with a midweek rate of €139 and a weekend rate of €189. And the newly built The Address on Amiens St Dublin 1 had rates of €259 for midweek and €279 for a weekend night.

We went directly to the hotels’ own websites. (Discounted rates may be found on online hotel booking sites, so if you’re searching, shop around.)

The search was conducted on August 31st, for standard rooms on two dates in October: a Wednesday, when reservations would be mostly from business travellers; and a Saturday, when there is an influx of leisure travellers for city breaks and events. Most corporate companies would have agreed lower rates in hotels.

Occupancy in Dublin is currently running at around 82 per cent, so it is almost certain the Crowe Horwath report for 2017 will show higher rates.

Mariea Doyle-Balfe, director at Crowe Horwath and joint author of the recent report, said: “Profit levels in hotels have now reached a sustainable rate for investors, and growth in room prices is beginning to fall. A hotel benchmarking company shows a rate increase for the year to the end of July of 6 per cent. Last year it was 14.7 per cent, and the previous year 15 per cent. We have had 10 years of no growth in the industry until the opening of the Holiday Inn on O’Connell St last year.”

Current pressures are due to ease by 2019. Fáilte Ireland issued a report conducted by Fitzpatrick Associates, economic consultants, in August on accommodation capacity in Dublin. It indicated that 5,382 hotel rooms are due to come on stream in Dublin between now and 2020. The rooms will be a mixture of new builds and extensions to existing hotels and will be mainly in Dublin 1, 2, and 4.

But will they be in time? Caeman Wall, Failte Ireland head of research, said: “Despite the over 50 per cent growth in tourist arrivals into Dublin and significant growth in corporate travel since 2010, the stock of tourist accommodation is largely unchanged to date. Only 18 per cent of people stay in hotels.”

With further visitor growth anticipated and the importance of Dublin as a gateway to the rest of Ireland, Dublin’s shortage of tourism accommodation is one of the biggest challenges facing the continuing growth of Irish tourism, he continued.”

Ruth Andrews, chief executive of the Irish Tour Operators Association (ITOA) said: “The frustration for ITOA members is not being able to satisfy demand from their customers, and they cannot get accommodation no matter the price. Basically it is no longer a price-led issue but a capacity issue.”

In a statement, the Irish Hotels Federations said, Dublin rooms were highly competitive compared with other European city destinations and represented good value. “The Irish Hotels Federation recommends that people do not rely on just one source when comparing accommodation prices. It also advises people to check hotels’ own websites as well as contacting hotels directly where better rates may be available.

“Hotels take approximately 23 per cent of bookings through third-party websites. This can cost in excess of 15 per cent in commission and impacts on the price charged to consumers.”

The hotels federation said there was a temporary capacity issue in Dublin, which was being addressed and would work itself out relatively quickly.

“In the meantime it’s an opportunity for Ireland as a whole. We’re seeing this already with visitors increasingly venturing beyond Dublin. This will help to extend the recovery in the tourism industry to the regions where occupancy still lags behind Dublin.”