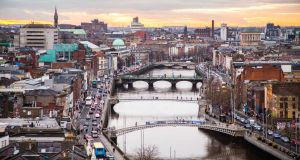 Accommodation requests for Dublin Airbnb properties were 25% more likely to be ignored when they came from gay male couples, according to Dr Ronan Lyons and Mr Rishi Ahuja of Trinity College Dublin. Photograph: Getty Images

Gay male couples are discriminated against by Dublin hosts on the home-share website Airbnb, according to new research conducted by economists at Trinity College.

The report by Dr Ronan Lyons and Rishi Ahuja found 25 per cent of requests for bookings by gay men were ignored by hosts.

The only difference in the four couples was that the gay men were 25 per cent less likely to secure a booking. The lesbians were not discriminated against at all. “The discrimination wasn’t rejection, it was ignoring requests for people to stay. It shows how discrimination can be quite hidden or subtle, which makes it difficult to be aware of,” Dr Lyons said.

In the booking requests, the wording implied rather than stated outright who the couples were.

A man writes “my boyfriend and I”. They did not use Instant Booking but requests that must be responded to by hosts.

The research was prompted by research discrimination by Marianne Bertrand and Sendhil Mullainathan of the National Bureau of Economic Research (NBER) in the US, which found that CVs with “black-sounding” names received less interest than “white-sounding” names.

In the Dublin research, requests were made to both shared accommodation and standalone properties. There was no difference in responses between both.

Airbnb is a home-sharing website based on trust between hosts and guests, who have provided the company with verifications of who they are. “Giving your identity gives trust and there is a trade-off between trust and discrimination,” said Dr Lyons.

A spokeswoman for Airbnb told The Irish Times “Last year we published a report looking at what we can do to fight discrimination and build inclusion amongst our community and we have implemented several changes.”

The principal change was the introduction of a nondiscrimination policy for all hosts and guests to accept. It was introduced principally because of discrimination against African Americans in the US. It states Airbnb hosts “may not decline a guest based on race, colour, ethnicity, national origin, religion, sexual orientation, gender identity or marital status”.

Airbnb also stated that it has supported marriage equality across the world including in Ireland, where it launched a Host with Pride campaign during the 2015 Marriage Equality campaign. The spokeswoman went on to say, “when we are made aware of issues, we work fast to help take care of hosts and guests and remove bad actors from our community”.

Airbnb was set up in 2008 and the most recent figures show it has more than two property million listings and has hosted more than 200 million guests to date. Airbnb is represented in over 190 countries and 34,000 cities worldwide. The company is worth an estimated $31 billion (€26.1 billion).

A 2016 survey by Ben Edelman, Michael Luca and Dan Svirsky of Harvard Business School found that racial discrimination was prominent on the Airbnb site in the US. The study found that guests with generic African-American name were about 16 per cent less likely to be accepted by hosts in five major US cities. A campaign on social media called #AirbnbWhileBlack highlighted incidences of discrimination.

Put a spring in your step for running in February
8