Literary haunt is home to the longest bar in New York 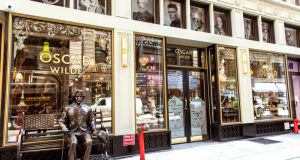 The new Oscar Wilde bar which has opened in New York, after a $4 million investment by Irish duo Frank McCole and Tommy Burke

Step inside a new literary haunt in New York and you’ll find 26 clocks that never change time. They are all set at 1.50pm, the time of death of the writer after whom the bar is named, Oscar Wilde. The interior of the bar is as opulent as you might expect for a place dedicated to the flamboyant essayist, novelist and playwright whose preferred alcohols were Champagne and absinthe. And it’s as decadent as you might expect when you find out $4 million was spent on the creating the space.

There are roaring fireplaces, marble statues, a piano dating back to the 1890s, wood panels from Hope Castle in Castleblayney, gilt-framed mirrors, pieces of imported Murano glass and eccentric antiques from Ireland, France, England, Scotland, and Wales. It is also home to the longest continuous bar in the city, measuring 118.5 feet and beating the previous title-holder, Tracks in Penn Station.

Oscar Wilde, in the NoMad neighbourhood, is the latest venture from Frank McCole and Tommy Burke, who both live in New York but hail from counties Monaghan and Mayo respectively. They are the duo behind Lillie’s Victorian Establishment, in Union Square and Times Square. Lillie’s is named after Lillie Langtry, a successful actress and socialite of the 19th century and longtime friend of Wilde.

“What initially motivated us to pay homage to Wilde was that he was longtime friends with Lillie Langtry,” Burke explains. The two grew up reading Wilde and say they are “very proud when Ireland became the first nation in the world to legalise same sex marriages” and so, they want to “attract local New Yorkers, tourists, the theater and Broadway community, Wilde fans and others… to celebrate Oscar Wilde’s legacy and become an inclusive destination for all”.

In designing the 5,874 sq ft space, the Irish men have given a nod to Wilde’s witticism, “Moderation is a fatal thing, nothing succeeds like excess”. The longest bar accolade is one element. It is intricately carved with garlands, plus horse and elephant heads, and is a copy of the one at the Lillie’s, which was brought over from Gosford Castle in Armagh, now best known as a Game of Thrones location. The Carrera-marble top of the Oscar Wilde bar is held up by white marble lions carved in Vietnam.

The antiques, which the pair started collecting 10 years ago before they opened Lillie’s, include a fireplace from the 1840s, inlay from Hope Castle circa 1700s, porcelain from Gosford Castle and a 1878 walking stick gifted by Wilde’s family. There is also a newly built life-size bronze statue of Wilde, leaning against the bar, his hand perfectly shaped to hold a pint of Guinness. There are even one-armed stools, built in Mexico, to facilitate an “Irish exit” (where you leave quickly without saying goodbye).

The pair’s favourite piece is the Belgium piano from the 1890s. It is an Instagrammer’s paradise ... and that’s before you get to the cocktail list, which was inspired by a piece of history you can’t help but think Wilde would enjoy.

When McCole and Burke were signing the lease on the vacant space, they discovered that the 12-storey building was once the city’s Prohibition Enforcement Headquarters. The mob even occupied a floor in the building to listen in on the federal agents.

And so it was decided that the cocktail list, by mixologist Johnny Swet, would reflect both the Victorian and Prohibition eras. “Oscar Wilde’s Potent Elixir” features cognac, gin, Guinness, cassis, lavender, Champagne and orange zest. Another favourite is one of the “Wise Guy” cocktails – “My Bookie’s Wife”. McCole and Burke describe it as refreshing and it includes Bisongrass vodka, elderflower liqueur, rose wine, grapefruit and Peychaud’s bitters. That long whiskey bar is home to over 300 whiskeys from all around the world and there are 32 beers on tap. They plan on having two Irish craft beers on rotation at any time - it’s Porterhouse at the moment. In honour of Wilde, absinthe and Champagne are also on offer, of course, and absinthe drip cocktails are served by the absinthe fountain.

Asked about their $4 million investment, McCole says that construction in New York is expensive and their goal was to get it right. “We intend to be here for a long time.”

If you, like Wilde, can resist everything except temptation, here are a few other establishments in which to toast his genius.

Satisfy your Oscar Wilde inspired gluttonous impulses (“Love and gluttony justifies everything”), and head for the Windy City. This Chicago premises honours Wilde in name as well as through a Warhol-inspired portrait hanging over the fireplace. Wilde’s witty quips adorn the walls of a small library where you can enjoy selections from the extensive beer list or, of course, Champagne. Wildechicago. com

The Oscar Wilde Bar is a space where, “great minds came together to change the world”, according to the hotel. Nestled between Mayfair and Soho, it’s in this room that Wilde fell in love with Lord Alfred Douglas, David Bowie retired Ziggy Stardust and Mick Jagger, the Beatles and Elizabeth Taylor danced the night away. Dating from 1865 and formerly known as the Grill Room, the gilded room was renamed in honour of Wilde. hotelcaferoyal.com/oscarwildebar

It might lack the opulence, but Kennedy’s pub has plenty of Wilde history and a marble bar that served as a perch for James Joyce and Samuel Beckett. Wilde also drank in the bar on Dublin’s Westland Row and worked in the shop attached. kennedyspub.ie