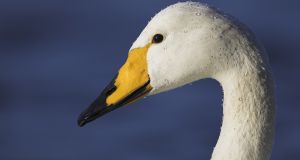 Two contrasting moments at Lough Beg: from a hill in Co Derry, already half-removed for earthworks, giant diggers are heaping up the bed of a new motorway out of a mosaic of wet meadows. Beyond them, ribbons of water glitter across towards Antrim on the lough’s eastern side. The green western fringe is stippled with white dots, distant swans.

From an old stone wall a few miles north, cattle are moving in single file through the rushes and sedges of the “strand”, with the woods of Church Island beyond them in the slanting evening sunlight; a redshank bobs on a stone nearby, alert sentinel to its nearby nest; the ears of a hare, like a pair of antennae, stand proud of the long grass near the hawthorn hedgerow; on the lough water beyond there are courting shoveler ducks, circling tightly in pairs with oddly dunked heads – and many more floating swans.

This is Seamus Heaney’s childhood country, present in much of his work. The Church Island view is the very recollection that brings balm to him in The Strand at Lough Beg, his troubled elegy for his cousin, murdered in the Troubles. And nearby is Anahorish, “my place of clean water / the first hill in the world / where springs washed into / the shiny grass”.

Lough Beg is not only very beautiful and rich in culture and history, it is also one of the most important sites for waterbirds in Ireland. Heaney remembered both land and birds vividly in an essay for the Royal Society for the Protection of Birds:

“A dream land that was once the real land, a shore at evening, quiet water, wind in the grass, the call of birds, maybe a man or woman out in a back field just standing looking, counting cattle, listening ... a landscape of the peewit and the curlew and the whirring snipe.”

Heaney expressed deep concern when the new Belfast-Derry motorway route was first proposed along sections of Lough Beg in the early 2000s, though it had, and has, some strong local support.

More than a decade before our current biodiversity emergency was declared, Heaney wrote to Lady Moyola, the widow of former Northern Irish prime minister James Chichester-Clark, who is part of a remarkably cross-community campaign against the route.

He told her: “Those undisturbed acres are as much a common spiritual resource as they are an ecological treasure. All over the world it is being realised that the outback, as we might call it, of the ‘developed’ areas, is the last vital ditch in need of protection, and this work of protection has to be done vigorously at local level.”

Nobody has campaigned more vigorously for the road to be re-routed than Chris Murphy, an ornithologist who has been studying Lough Beg since the 1980s. He is my guide here, and though I make it clear I want above all to get a sense of the birds and the landscape, he first directs me right down to the site where the big diggers are excavating.

It’s an odd feeling, to stand by a sunny hedgerow drenched in the scent of hawthorn flowers, with swallows feeding at eye level and goldfinches singing, while the low-lying water meadows are being reshaped into a towering highway just 200m away.

Meanwhile, Murphy has disappeared abruptly with his camera. He only reappears when he is gently, but firmly, escorted off the premises. Undeterred, he leads me to a vantage point uphill, with an overview of both the building works and the lough, with swans in the background.

With his telescope, we can work out that dozens of these birds are whooper swans, because they have straight necks and distinctive yellow marks on their bills.

Your local swans are almost certainly mute swans, with curvy necks and orange bills topped by a big black knob. Whoopers are mainly winter visitors from Iceland, and only frequent a few Irish sites in any numbers. Lough Beg is one of their favourites.

But this is May, and in a couple of hours we see more than 40 whoopers. Up to six pairs breed on the lough. Not only is their breeding very unusual in Ireland, but this density of nests may be unique in the world. Whoopers are highly territorial; one pair will not let another share the same water body.

Murphy reckons they share here because Lough Beg offers much more food per square metre than their usual – and vast – subarctic nesting grounds.

Their breeding here is just one of many reasons why Lough Beg is so important for bird life. It holds very high numbers of wintering wildfowl, though they have fallen off since Gordon D’Arcy wrote his landmark, and beautifully illustrated, Birds at Lough Beg, now sadly out of print, in 1978.

In the early 1980s, Doris Noe, now married to Murphy, located 244 pairs of breeding wading birds – redshank, snipe, curlew and lapwing – on the lough. Today, however, the first two species no longer breed, and the others are greatly reduced. The Royal Society for the Protection of Birds has a project with local farmers to restore suitable habitat.

Many thousands of migrating birds still pour down, and up, the north-south flyway of the Lower Bann river, with many resting at Lough Beg or, just to the south, Lough Neagh. The passage of whimbrel, a small curlew, is especially notable over Lough Beg. The varied habitats on its fringes are also rich in wild flowers. The strand is a stronghold of Irish ladies’ tresses, a rare orchid.

For all these reasons, Lough Beg is recognised with almost as many international conservation designations as Dublin’s North Bull Island.

Naturally, then, there was environmental as well as cultural resistance to the new road route which, despite some alterations, still runs right past the fields where the whooper swans feed.

However, rather surprisingly to a layperson, the Royal Society for the Protection of Birds and other conservation groups have withdrawn their objections after mitigation and monitoring arrangements were agreed.

Murphy disagrees very strongly with the society’s position. Supported by some local farmers and landowners, as well as the actor Stephen Rea and nature writer Gordon D’Arcy, he has conducted a lonely fight through courts. After being refused leave to appeal by the UK supreme court last year, he has now brought his case to Europe.

Time will tell whether he is right, and if the road will not only disturb birds nearby but attract further development to the area that will finally destroy all its very special qualities.

At present the whoopers are still there, as we saw. But as D’Arcy says, using this route, especially when there is an available alternative through a disused airfield – the option favoured by Heaney – “is a big risk to take”.

And it does seem distinctly odd, when all the current advice on conservation tends towards larger sites with more connectivity, to reduce this very special wetland area and fragment it with a road.

In any case, it’s probably a good idea to enjoy this long-hidden gem while you still can.