Finding wonder in nature – when children catch the bug 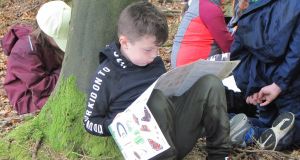 Finding the right minibeast: Marley Copas studies an identification guide as his classmates gathered around a tray of slugs, centipedes and woodlice. Photograph: Paddy Woodworth

“The beauty of outdoor learning,” says Mark O’Connor, “is that any child can be stimulated by it. Some form of connection to nature is always possible.”

That might seem like a wildly optimistic view if you think kids are now organically attached to their phone screens. But it is vividly demonstrated over the next four hours as O’Connor leads a large group of seven-year-olds down to a river to dance, and deep into a forest to turn over sticks and stones.

The aim in both cases is to find and identify minibeasts – invertebrates to scientists, bugs to most of us.

O’Connor is a project officer for the Field Studies Council, a veteran British nature organisation now working at Tollymore National Outdoor Centre in Co Down, and at Lissadell Estate in Co Sligo.

Tollymore forest nestles under the Mourne mountains. The woodland canopy is all luminous greens on a bright May morning. The understory is stippled in bluebells and wild garlic. It’s an ideal place to be introduced to the natural world, and an introduction it is going to be: many of the third class at St Malachy’s Primary School, Newry, have never been in such wild country before. But they cop on very quickly.

“We are going into the woods,” O’Connor tells them. “What do you think of that?”

“Dead exciting!” is the first response.

“What do you think you will see there?” he continues.

This confirms O’Connor’s dictum that “kids today know about lions and tigers and bears, which they can’t see in the wild here, but they don’t know about pine martens, red squirrels and woodlice, which they can.”

“How will we find a river in the forest?” says O’Connor.

But again, it is his classmates themselves who put him right, and “go downhill!” wins the day.

Their teacher, Danielle Digney, is a passionate believer in child-centred learning. She finds a kindred spirit in O’Connor, who led an outing for her last year. He says he sometimes has to work harder to make teachers comfortable with an outdoor classroom, full of apparent hazards and without any obvious structure.

Yet safety does come first here. Digney has brought two classroom assistants – there are about 20 in our group – and for the river module O’Connor brings an extra colleague too.

And the outing is not only about finding wonder in nature, it’s also about building resilience and confidence in unfamiliar surroundings.

Digney has noticed that children who have co-ordination difficulties, and fall and cry a lot in school, fall less and cry less in Tollymore despite the forest dimness and the uneven ground.

They are learning here, she says, that when they get hurt a little they can “regulate their emotions and move on with their experience, as they don’t wish to miss out on what is coming next”.

Small wonder, as what was coming next was river-dancing. O’Connor shows the teachers how to walk the children, one at a time, into the middle of a very shallow section of a stream and dance.

“Sweet moves now,” he says, “wiggle your feet like mad.”

Which they do, gleefully.

Meanwhile, he and the teachers use nets to catch the larvae, nymphs and shrimp that the capering little boots have disturbed. These are released into white plastic trays, where the children are delighted to spot them. They try and match them – at least in terms of numbers of legs, shapes of tails and so on – to identification charts.

Everyone wears wellingtons, but some children still manage to get a lot of water into their boots. They take it in their stride, literally. “Wet feet aren’t bad” is one of the day’s lessons.

As O’Connor points out, when it rains “your skin is waterproof”. One little boy touches his arm repeatedly, in amazement. It’s true, no water is getting in.

This is just the beginning of a programme that includes finding badger setts and “bunny holes”, discovering sheep bones, finding that deer strip bark from trees, and learning to listen in the forest to bird song, to running water, even to silence.

O’Connor understands that children love noise too. So there are also opportunities to roar small lungs out with joyful imitations of deer whistles, sheep calls and bird cries.

After lunch it’s time to explore under the sticks and stones of the forest floor for minibeasts. “Bugs here won’t hurt you,” O’Connor says. “But you can hurt them. Gentle hands now, gentle hands.”

Slugs, centipedes and woodlice are soon crawling or scurrying over another white tray. With one exception, every child pores over them in delight. The exception is studying the identification chart for himself. The next David Attenborough, perhaps.

Finally, there is a quick game of hide-and-seek, and the children scatter for cover as if they had been born in the forest. We’ve been out for four hours, but no one is rushing back to the bus. But no, no one gets lost either.

Nor is the day out quickly forgotten. The following week, Digney says: “Some of the children used their break time today to look for minibeasts in the playground, encouraging the younger children to take part and to use soft hands like they had been taught on Friday.

“This trip definitely does stay with the children. My class from last year expressed their jealousy of the class going to the centre, laughing about falls into the river, alfresco dining at lunch time and bugs crawling up arms and faces.

“Both groups talk about Mark so fondly, about what they had learned from him.”

I really enjoyed going on the long walk down to the river, climbing over rocks and fallen-down trees. My favourite part of the day was dancing in the river. I’ve never been in a river before, this was really good fun. I don’t really like minibeasts, but it was cool looking at them in the trays and finding out what their names were. – Sophie McGeeney

I really liked the part when we were looking at the bugs in the little tubs. I loved being able to see all the different body parts and how many legs they had. It was nice to make them a bug hotel to live in after we looked at them. We were a bit mean taking them from their homes, but at least we made them a new one. – Kyla Brailsford

I had great fun learning about new minibeasts and what they were called. We had talked about some minibeasts in school but I didn’t know there were different types of minibeasts living in the water. Mark taught me loads of new things and I showed them to my brother on the internet when I got home. Mark was good fun, I really liked when he made it rain [by shaking wet branches]. – Katrina Ward

Looking for different animal habitats in the ground and under trees was really exciting. It was so interesting to see the different sizes of holes that the animals could live in. Badger setts are so cool. Who knew an animal could build a house with different rooms in it, like our houses? – Kyle Campbell