The lighthouse life: ‘You must have the best job in the world’

Keepers’ lives always seemed romantic. If you’d like a taste, you can even stay the night 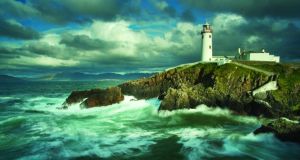 The road to Wicklow Head lighthouse feels like a departure from civilisation. The 2km path is only wide enough for one vehicle and is banked on either side by hedges and stone walls.

The original Wicklow Head lighthouse was built in 1781, but was regularly obscured by fog. It lasted as a lighthouse for only 25 years. Instead, it was kept as a landmark and renovated in 1996 as the only lighthouse tower in Ireland in which one can spend the night.

Three men maintained Fastnet lighthouse. Their only link to the outside world was a black and white television and a UHF telephone

Wicklow Head is what many people consider lighthouses to be: lonely sentinels of our island status, beautiful objects lovingly created in a bygone era, but irrelevant in the modern context. Yet just a short walk away down a curved path is the modern-day Wicklow Head lighthouse, which casts a soft LED beam on the waters of the bay and the headland around.

It comes as a pleasant surprise to many that lighthouses still exist in an age when even a smartphone is a navigational tool beyond the comprehension of previous generations. Nowadays, ships use the global positioning system, radar, radio and telephone. Why do we need lighthouses?

“It’s a question we get asked all the time,” says Capt Robert McCabe, the director of navigational services for the Commissioners of Irish Lights, the all-Ireland body which manages the 66 working lighthouses around the island.

“Mariners intuitively know the answers. They value lighthouses as something very stable and solid. Take a ship making landfall on a dirty night at sea. If they see a lighthouse, that’s confirmation of what they are getting from their satellite navigation system. It came across very strongly in our recent consultation that mariners value the visual aid. It gives them greater spatial awareness,” he says.

Ireland’s lighthouses have been fully automatic since 1997. Prior to the introduction of electricity, lightkeepers had to hand-pump paraffin vapour under pressure to the top of the lighthouse to illuminate the lamp. It was a labour-intensive process.

“A microchip did away with my job,” laments Gerald Butler, who was a lightkeeper for 21 years. The 68-year-old now works as an attendant keeper on the Kish lighthouse in Dublin Bay, maintaining the generators and the back-up battery.

He speaks of “loving the aloneness” of his erstwhile life, which he chronicled in his book, The Lightkeeper: A Memoir, published in 2012. “I loved how close to nature you could be. You had all the time in the world.”

Lightkeeping is traditionally a multigenerational activity in Ireland. Lightkeepers wore uniforms, the training was military-like in its nature, they had ranks – supernumary, assistant and lightkeeper.

They learned signalling, semaphore and Morse code. They had to know how to swim, to make do and to cook at a time when men made a virtue of not being able to cook.

Butler’s mother was an assistant lightkeeper who managed to find the time to raise 15 children. His grandfather Laurence was a captain on a lightship, and his father, also called Laurence, was a lightkeeper who would spend months away from his family on “the rock” – the generic name given to many of the more extreme lighthouse locations in Ireland.

He would not see his father for months at a time. “It was absolutely normal for us,” he recalls. “I thought I was no different from anybody else.”

As a lighthouse keeper, Butler used to spend three weeks at a time on Fastnet, the southernmost tip of Ireland, 12km off the coast of Co Cork. Three men maintained the lighthouse – their only link to the outside world was a black and white television and a UHF telephone. The on/off button on the television was operated by using twine and a piece of cork.

He was there in 1979 when 18 people died during the Fastnet race. He recalled a “violent platform of water” overwhelming the yachts as they pitched and tossed in the deadly seas.

Lightkeeping was a vocation and a way of life, he says, and not for everyone. You had to be able to stand your own company.

Butler was single in those days. “Since I have been with my partner, I realised for the first time what it was like for married people. It was something that I never understood.”

She likens the organisation to Guinness. “Generations and generations of families work in Irish Lights. There is a real embedding of Irish Lights people around the coast.”

Ireland’s lighthouse heritage was fragmentary and local until the Great Lighthouses of Ireland initiative begun in 2015. It was consciously modelled on the Wild Atlantic Way.

It has created a common theme and a marketing premise around disparate lighthouses situated in some of the most remote and most beautiful parts of the country.

There are 13 great lighthouses. Eight, including Wicklow Head, have accommodation on site and are run by the Irish Landmark Trust; seven have a visitor centre. Some have both.

Each of Ireland’s lighthouses is a miracle of construction. The Fastnet lighthouse consists of more than 2,000 hand-carved pieces of granite; it has withstood everything the wild Atlantic has thrown at it. The Kish is built on a sandbank. Bull Rock, in Co Kerry, is nearly 100m high. Ten workers drowned in the construction of Tuskar Rock, off the coast of Co Wexford.

Perhaps the most remarkable of them all is also the oldest working lighthouse in the world. Few visitors would guess from its distinctive black and white appearance that Hook Head lighthouse in Co Waterford was built in 1172, not far from where the Norman invasion of Ireland began just three years previously.

It is buttressed by walls which are 4m thick and still black with soot in places from the days when the lantern was fired by coal. There is now a thriving visitor centre and it was recently nominated as a finalist in the upcoming British Guild of Travel Writers Awards. Last year, it attracted 70,000 visitors, while some 140,000 visitors stayed at the various lighthouse locations last year.

Fanad Head in Co Donegal opened as a visitor attraction two years ago with the expectation of getting 15,000 visitors a year. It is on course to attract twice that number this year.

Shields O’Connor says the economic activity around lighthouses is appreciated in places which are otherwise disadvantaged by their peripherality.

“Sometimes when I am at a dinner party and I tell people what I do, they say to me, ‘Oh my God, you must have the best job in the world. I’d love to that’.”

Great Lighthouses of Ireland is on RTÉ One at 6.30pm on Sunday, September 30th

Easy ways to give your home an energy boost
8

Food foraging: Bring a little of the wild into your eating and drinking
9