Book of Durrow is on its way to the British Library

The Book of Durrow, which predates the Book of Kells by around 100 years, is to be loaned by Trinity College to the British Library for an Anglo-Saxon exhibition. Video: Ronan McGreevy 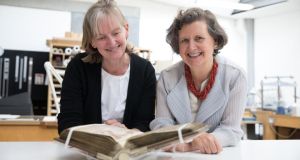 Before the Book of Kells, there was the Book of Durrow. This smaller, lesser-known manuscript is an exquisite piece of craftsmanship in its own right and is destined for the British Library as part of an exhibition of world importance – Anglo Saxon Kingdoms: Art, Word, War – which opens next month.

The exhibition covers the Anglo-Saxon period from the coming of the Germanic tribes to Britain in the sixth century to the Norman Conquest in 1066.

The Book of Durrow will be one of three manuscripts underpinning this exhibition. The others are the Lindisfarne Gospels, named after the monastery off the Northumbrian coast founded by Irish monks, and the enormous Codex Amiatinus, the oldest surviving complete version of the Christian Bible written in Latin. It was produced in England and given to the pope as a gift in 716. It is returning to England for the first time in more than 1,300 years.

The Book of Durrow rarely leaves Trinity College Dublin’s library, its home for the past 450 years. It was loaned to the British Library in 1961 and last left Ireland in 1984 when it was exhibited at a number of museums across Europe as part of the Treasures of Ireland exhibition.

Some might wonder what the Book of Durrow – a precursor of the Book of Kells and therefore regarded as a high point of Celtic civilisation – is doing in an exhibition on the Anglo-Saxon world.

These manuscripts are known as “insular art”, but the insular refers to the geography of them being produced on the islands of Britain and Ireland, not the mentality which produced them.

The Book of Durrow is the oldest surviving fully illustrated gospel book from these islands. Its exact date and place of composition are uncertain. It was produced some time in the second half of the seventh century, 100 years before the Book of Kells.

It is named after the monastery in Durrow, Co Offaly, where it remained for at least 700 years until the 17th century, but it could have been produced there, in Iona off the coast of Scotland or at Lindisfarne. It could be Irish, Scottish or English or a combination of all three, but such national distinctions are anachronisms in the context of the time the book was written.

According to an inscription in the book, it was completed in 12 days by a scribe called Columba. However, it is estimated that the script alone would have taken 60 days to transcribe, so it seems that this is an attempt to attribute the book to the miraculous hand of St Columba, patron saint of Durrow and Iona.

An analysis of the pigmentations used reveals a toxic combination of iron gall, red lead and arsenic sulphide. Health and safety considerations were not high priorities in seventh-century Irish art.

The book was enshrined in the monastery at Durrow, hence the name, but the story goes that a local farmer doused the book in a water trough to cure his sick cows, and the book and the cows were none the worse for the experience.

Influences from the time

Trinity College Dublin (TCD) academic Dr Rachel Moss said the Book of Durrow was, in many ways, a synthesis of influences from the time.

The carpet page for the introduction to the gospel of John is decorated with animals, particularly snakes. These motifs were quite common in Anglo-Saxon England and not Celtic Ireland. Other motifs in the book are from the Mediterranean and pre-Christian Celtic worlds.

“The suggestion is that the scribe is almost trying to show off that he knows about all these different cultures and art styles,” she explained.

Exhibition lead curator Dr Claire Breay said some of the imagery in the Book of Durrow was similar to that found in metalwork discovered with the Staffordshire Hoard in 2009. The hoard is the largest treasure of Anglo-Saxon gold and silver metalwork yet found and has led to a reappraisal of this whole period.

“It highlights the impact of the interconnectedness of the Anglo-Saxon kingdoms and Ireland. We see the same interconnectness with continental Europe as well,” she said.

The notion of the Anglo-Saxon world benefiting from the exchange of ideas with Ireland and continental Europe is one that resonates as the debate about Brexit and Britain’s future place in the world rumbles on without resolution.

The parallels seem obvious, but Dr Breay points out that the exhibition was first commissioned in 2013, three years before Brexit.

TCD librarian Helen Shenton said Brexit discussions underlined the importance of co-operation between cultural institutions. “In a Brexit and post-Brexit era it is so important that [we] continue to collaborate in such significant partnerships,” she said.