Should the Kerry reeks be a national park?

The popularity of Carrauntoohil has caused erosion of paths. Interested parties say action is needed 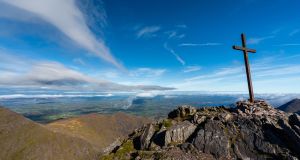 The summit of Carrauntoohil. In 2018, 140,000 recreation seekers entered on to the area from the four main access points, causing greater wear and tear on the mountains and increased dangers

Over three decades ago I ascended Carrauntoohil for the first time. Parking at the traditional start point in Cronin’s Yard, which could then accommodate about 10 cars, our group headed up the isolated Hag’s Glen, while feeling a bit apprehensive about climbing the allegedly notorious Devil’s Ladder.

Halfway up a benign grassy gully, a Kerry man among us casually mentioned this was in fact the ladder. He added: “Don’t worry, it’s just a poodle given fangs by the fantasies of Victorian travellers.”

He was correct. We encountered no problems with our ascent and were fully rewarded for our efforts with a photogenic vista as we stood alone on the summit.

Hillwalkers are renowned for their swarming instincts, with the highest point their ultimate goal. On my many subsequent visits to Carrauntoohil it became increasingly obvious that the mountain was becoming more crowded. Standing alone on the summit was now a rare event, while the effect of the ever-expanding footfall was clearly eroding and destabilising the mountainside.

Under this increasing environmental pressure, the Devil’s Ladder did develop fangs. It became loose and unstable and was soon biting back. Climbers were injured as a consequence. Walkers then began using other routes for safety reasons. Particularly popular was the exposed but wonderfully scenic Heavenly Gates Path and also a grassy defile on the north side of the mountain, known as Brother O’Shea’s Gully.

Both these tracks became badly degraded, as the numbers accessing MacGillycuddy’s Reeks expanded ever more rapidly, and the virtually endless cycle of erosion, followed by transfer to a more stable path, continued. Walkers began using other paths to access and descend Carrauntoohil, notably the ancient Bóthar na Gige route on Cnoc na Toinne.

According to Kerry Mountain Rescue “since regaining a degree of popularity [Bóthar na Gige] has also been subjected to a high degree of erosion and is now loose and slippery in places”, while the team also says there have been a number of accidents there in recent times as a result of simple slips.

The problem is that Carrauntoohil and indeed most of MacGillycuddy’s Reeks have morphed into a huge visitor attraction. In 2018, 140,000 recreation seekers entered on to the area from the four main access points. This causes greater wear and tear on the mountains and increased dangers, while farming has been negatively affected.

Yet the highest peaks of the other nations occupying these islands get multiples of Carrauntoohil’s ascents while suffering less damage from erosion. The reason is simple. Scafell Pike, Ben Nevis and Snowdon each have well-constructed and relatively stable sacrificial paths to the summit. These hardwearing trails prevent the sequence of erosion and degradation, followed by safety issues that then force walkers on to new tracks where the cycle of erosion repeats itself.

It will probably come as a surprise to many that, unlike other Irish mountain ranges, MacGillycuddy’s Reeks are not part of a national park and are instead in private ownership and being actively farmed, which makes managing these uplands more complex.

Access and the installation of consolidated trails is only possible with the goodwill of landowners, which could be relied upon when the footfall on the reeks was minuscule. The growing number of walkers is now, however, putting pressure on the goodwill of the farming community, while the increasing erosion had made the mountainside slippery and dangerous in many places.

Generally, there has been resistance in Ireland to any interventions that would compromise the pristine wildness of the uplands. In the light, however, of the growing problems and safety issues on Ireland’s highest mountains, a consensus emerged that something needed to be done about managing the increasing number of recreation seekers.

For the first time, all the stakeholders in the MacGillycuddy’s Reeks mountains are sitting down and talking to each other

In response, the MacGillycuddy Reeks Mountain Access Forum was established, with the aim of “protecting, managing and sustainably developing the MacGillycuddy’s Reeks mountain range, while halting and reversing the obvious and worsening path erosion”.

According to John Cronin, who runs a climbers’ cafe and tearooms at the foot of the reeks, the new Hag’s Glen path has been “a fabulous job and has attracted additional footfall. At Cronin’s Yard we now provide parking facilities for up to 200 cars on very busy days. The new path up the glen allows casual visitors who aren’t going to the top to have access to the beautiful mountain scenery. The initiative has also provided valuable employment within the local community and has been commented on favourably by many of our visitors.”

Mountain guiding and adventure provider Piaras Kelly of kerryclimbing.ie represents the commercial operators on the reeks forum. He is a passionate supporter of the initiative and believes it has done much to alleviate the atmosphere of mutual suspicion, which used to exist among the various interest groups.

“For the first time, all the stakeholders in the MacGillycuddy’s Reeks mountains are sitting down and talking to each other. This has been a very positive step forward.” He echoes John Cronin in saying the new path has been a great addition, but believes much more needs to be done.

So, what about extending the new path into and up the Devil’s Ladder? Does he believe this would reduce erosion and make the route safer for less experienced walkers?

“Something needs to be done, and I would be in favour of extending the path up the ladder, not to facilitate inexperienced walkers but to reduce erosion on other parts of the mountains. To do this, however, we need certainty about the insurance situation, and nothing will be done until farmers are indemnified against being sued.”

Helen Lawless is hillwalking, access and conservation officer with Mountaineering Ireland. She is a strong supporter of the reeks forum and believes a partnership among stakeholders is the best approach to management of the uplands.

“The forum has achieved much in a short time despite being provided with little funding. There is now a need to invest more in the huge tourism and recreational resource that Ireland’s highest mountains offer, but this shouldn’t only be about path repair and maintenance. Information about hillwalking routes and the preparation that is required before setting out should be provided on social media, and well-trained rangers should be available to help when people arrive to the mountains.”

With Piaras Kelly, she shares concern at the delay in delivery of the indemnity arrangement promised to landowners in the reeks and believes this is undermining the hard-won goodwill of the farming community.

She is, however, optimistic for the future. “The reeks-access forum is working very well and with additional resources can, I believe, become a model for a partnership approach to the sustainable management of other busy upland areas.”