My last Greek trip was a post-exam blur and I vowed never to visit again. I’m so glad I did 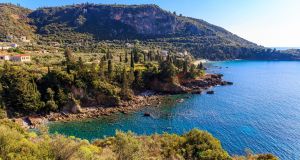 The last time I was in Greece was after some sort of exam and all I can remember is that the name of the island ended in “os”. After that, it’s a bit of a blur: stifling heat, zombie-like days, spanakopita and dreadful hangovers. I can’t remember the ferry, or even where I flew into, and I think I vowed to never visit again.

That is until I reached middle age. Suddenly the idea of grilled fish, sparkling seas and a quiet house without a hint of nightlife became very appealing. So it was with renewed vigour that I started to scour Greece for a peaceful summer holiday that wouldn’t break the bank.

Direct flights were important. Plus not too much hassle driving; I do enough at home and like to avoid right-hand side of the road rage when I am supposed to be relaxing. Food is important, of course. And clean beaches, too.

I had heard rumblings about how mainland Greece can be overlooked, and that most folks head straight for the islands. So, we settled on a couple of nights in Athens – to get our bit of culture – before driving south, breaking the journey with one stop in the mountains, before landing in coastal heaven.

I was dreading the Athens bit, but we needed to kill a couple of nights somewhere. I have to say, it’s a really spectacular city – the Acropolis and surrounding museums are magnificent. Despite the grim years of IMF intervention in Greece over the past decade, local authorities have invested in cleaning up the city, creating pedestrianised zones and making efforts to reduce smog. It has paid off. The hustle and bustle in the warm evening, and abundance of pleasant restaurants, meant two nights flew by.

Driving was a cinch. Turns out, the Greeks are much more sensible on the roads than the French or Italians, who are speed merchants and grumpy as heck. Greek roads, signs and road rage are all very manageable.

We took the scenic route down south, stopping in Mazaraki guesthouse near Mystras. These suites (from €90, xenonasmazaraki.gr/en) are oh-so Goldilocks (as in, just right) for families, with two tavernas within crawling distance. A small pool means the children will give you a little peace, but the real treat is the walks and hikes in the area. The restaurant at the top of the hill, with stunning views, serves some glorious dishes accompanied by a good selection of Greek wines. So high in the mountains, it is also beautifully cool in the evenings.

After another couple of hours driving through the stunning mountains of the Peloponnese, we got to Kardamyli, near Kalamata. The only negative thing you could say about this part of Greece is that the beaches are pebbly – so bring (or buy in the shop for €6) those slipper things so you don’t feel like you are walking barefoot on burning coals. The seas are some of the cleanest and most beautiful in the whole of the Mediterranean.

We stayed in one of the stunning self-catering villas with a shared pool at Liodentra (liodentra.gr). The houses sleep up to six, and with a choice of 10 restaurants within a 10-minute walk, you could not be primed for a more relaxing break.

You would be hard pressed to spend more than €15 per head in most restaurants, and that’s including decent wine. Portions are gigantic, and although the food can get a bit samey in Greece, it’s all very healthy. Italy is my gastronomic go-to, but 10 days there would be a disaster for my waistline. After a holiday in Greece, you come back looking a lot less like Barney’s gigantic sister.

The Greeks are also incredibly chilled – kids can wander off, and nobody seems to be lurking about to nick anything on the beach. It’s just not that busy.

On one of the rainy days (yes, it rains in Greece sometimes), we drove an hour to get the “best spaghetti lobster” in all of Greece, in a gorgeous taverna called O Takis in Limeni. We gorged on spaghetti with prawns and lobster in a delicious tomato sauce, washed down with a glass of rosé.

The large outdoor grill was in full swing by the time we left, with diners going up to pick their fish to have simply charred on the open flame, and served with “boiled greens”, which sounded like a boarding school staple but were actually delicious sautéed bitter greens with lemon.

Walking back to the car, we noticed little jetties into the bay, and some swimmers. The weather was dull but warm, so, peeling off into our togs, we jumped into the most beautiful sea and swam in crystal blue water, diving in and out under the grey skies.

Back in Kardamyli, the town slowly wakes up towards 6pm and the gorgeous wine bars, frozen yoghurt shops and tavernas mean you could happily while away a couple of weeks here. For something more active, you can go out in a boat for a half day with George, who also runs diving courses and will bring you into caves and secret coves to find beautiful swimming spots. Hiking trails in the surrounding hills are well worth the effort – an ice-cream afterwards in Lola’s is the prize for a three-hour trek.

We fell so in love with Kardamyli that I found myself wandering into the estate agents, eyeing up plots of land. Does a holiday recommendation come any higher than that?

Christmas dinner: Tips and shortcuts from the experts
7

Lockdown was hard, but it kept us closer to each other than we’ve ever been
9

‘As we raised a toast, there was no talk of lockdowns or the distance that separated us - just the four of us ‘together’ again’
10