From ukulele hoolies to steam engine rallies, there's something for everyone this summer 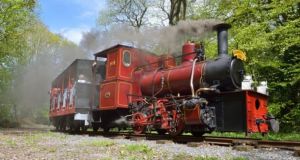 I first laid eyes on the Stradbally Woodland Railway in the mid-1990s. At two and a half years old, my parents brought me to the annual national steam rally in Stradbally for the August bank holiday weekend. I was a regular visitor from then on, and these visits helped cement my lifelong love for anything powered by steam, especially railway engines.

I jumped at the chance to join as a volunteer in 2016. Since then, I’ve spent as many of my free hours as possible doing all sorts of jobs, from fixing and firing and driving the steam locomotive, to laying new track and painting carriages.

The railway is part of the Irish Steam Preservation Society, and the pinnacle of the society’s calendar is the national steam rally (August bank holiday weekend, Stradbally Hall, Co Laois, irishsteam.ie). Now in its 55th year, the event takes in visitors from across the country for a wide range of attractions, and will this year feature 55 steam engines.

The entire event is organised solely by volunteer labour; everything from organising the car park, to setting up the layout of the field, booking exhibitors and making sure the engines are coaled and watered.

The rally helped put the village of Stradbally on the map long before Electric Picnic. We strive to include the community as much as possible, through sponsorship and by getting local people involved hands-on. We’ll be bringing steam back to the town centre this year on the evening of Saturday, August 3rd with a grand parade of steam engines up and down the main street. I’m proud to be one of the people who helps preserve history in my community; doing so as part of a team with a common passion is one of the best parts.

Ours is just one of a whole host of family-friendly and community-focused events and festivals happening around the country. These events are powered by the passion and dedication of locals hoping to preserve their history, reinvigorate their community, and show off their home to the wider world. Without the people power behind these events, summer calendars would look a lot more bare.

We spoke to others involved in small festivals and community powered events around the country to hear the stories behind them.

12th-14th July
Dooagh village, Achill Island, Co Mayo
facebook.com/DooaghDay
From steam to manpower on the country’s biggest island. The Dooagh Day festival takes place in the village of the same name on the western side of Achill Island. A currach is a traditional type of boat made from wood and animal pelts, though canvas is now the much more commonly used material. They’ve been used around all parts of Ireland, but are perhaps most synonymous with the west.

Currach racing had taken place on Achill for decades but by the 1980s it had begun to die off, mostly as a result of young people emigrating from the island. In 2015 a group of islanders came together to help revive the racing, hoping to foster a new community spirit. “Achill is an area that’s been particularly affected by emigration, especially after 2010,” says Tommy English, chairman of the festival. “It’s about going back to our roots and going back to our history.”

The festival runs over a weekend in July, with the main event held on Sunday. All proceeds go to a nominated projected on the island. It’s a generous gesture, especially since there is no cover charge for the events, only a suggested donation.

The festival has grown year after year, and this year will see an attempt for the record of the largest number of people doing a Rock the Boat dance to The Hues Corporation song. Up to 1,800 people are expected to attend.

Winter storms in 2014 caused serious damage to the village’s pier and access road, but the event has helped to rejuvenate a community that was once facing a very different future. “It’s kind of turned into a mini bank-holiday weekend,” English says. “We get people from all over the country coming and booking the Monday off work.”

Tuesdays and Thursdays in July and August
Pearse Street, Gorey, Co Wexford
goreytheatre.ie
The Gorey Little Theatre Group has been going for more than five decades, and their annual Summer Plays are the highlight of their year. “As far as we know [the Summer Plays] are unique. We’re certainly one of the longest continuing running theatre groups in the country,” says committee member Malcolm Byrne.

Established in 1951, performances took place in Courtown harbour before they moved to the theatre in Gorey in the 1980s. With a large number of locals involved – the theatre is run by a trust and managed by volunteers – it’s no small task for them to consistently put on two different plays twice a week, every week in July and August.

Generations of families have worked with the theatre to make this possible. “We don’t get arts council funding, it’s a locally run 341-seat theatre. It’s always been about providing entertainment,” Byrne explains.

The theatre has remained focused on entertaining the community over the years, but they’ve also helped inspire the next line of actors, and ensuring repeat business in the town. “It’s been a way of introducing some people to the stage. You see year after year people who would regularly holiday in Wexford would make it a point to come along to the theatre,” Byrne says.

The theatre has also helped newcomers to integrate into the community, so much so that productions in Polish have been hosted in recent years.

This year’s Summer Plays are Blithe Spirit by Noel Coward, running every Tuesday and Thursday in July, and Don’t Dress for Dinner by Marc Camoletti, running the same weekdays in August. Tickets are €13 at the door or online.

August 17th-18th
Dún Laoghaire, Dublin
ukulelehooley.com
Once an exotic instrument to learn, these days the ukulele is a common sight in rehearsals rooms and venues all across the world. Now the four-stringed instrument has travelled from the shores of Hawaii to the shores of south Dublin for the annual Ukulele Hooley in Dún Laoghaire.

“I heard Israel Kamakawiwo’ole on the radio one day driving home and that’s what inspired me to get involved,” says the festival’s founder Tony Boland. “I tried to get a group of people together, and had to use an English and American website. I found about six people in Ireland that played ukulele, and we started meeting up and playing together in August 2008. The following year we held the first festival.” It took just one phone call and one meeting with the council to get the ball rolling.

The hooley, celebrating its 10th anniversary this year, was the first of its kind in Europe. It moved from Dublin city to Dún Laoghaire in 2010, and the council has been supporting the event ever since.

Visitors come from all over the world, with up to 20,000 expected over the weekend in mid-August. Boland says there will be performers “coming from England, Belgium, Germany, the Netherlands, Canada and the US”, ranging in age from 14 to 82.

Some of the hooley’s events include a Bus Busk, where up to 100 players travel around the area by bus and perform at different stops, and the Ukulele Jam. “We try to get as many groups from all over the country to come, and we work out a programme of eight songs and they all perform together in the concert in People’s Park on Sunday,” Boland explains.

The main concert in the People’s Park takes place on Sunday, August 18th at 12pm-7pm. “It’s become known as a family thing; local families bring along picnics to sit through the whole concert.”

August 30th-September 1st
Cape Clear Island, Co Cork
capeclearstorytelling.com
Cape Clear is only 13km off the south coast of Cork, and is the place to be at the end of August to hear some of the world’s best storytellers.

The Cape Clear Island International Storytelling Festival is now in its 25th year, originally founded by two Americans in 1994. Chuck and Nell Kruger were living in Switzerland but “fell in love” with the island, according to festival committee member Diarmuid O’Drisceoil. Soon, the couple moved over full-time and lived on the island for nearly 30 years, returning to the US in 2017.

“They wanted to do something for the island that would be relevant to its heritage and tradition, so they started a storytelling festival.” With the help of Northern Ireland storyteller Liz Weir, the event was soon established.

In those 25 years, the festival’s renown has grown globally. “People from the world of storytelling regard Cape Clear as one of the top three in the world,” O’Drisceoil says. Storytellers from New Zealand to the US and everywhere in between will make the pilgrimage, including three of the main speakers, who hail from Indonesia, the US and the UK. O’Drisceoil, who is the fourth main speaker, spent many of his childhood summers on the island where his father grew up.

About 300 people are expected for this year’s event, greatly boosting the island’s usual population of just 120. “Economically, it’s huge for the island. The ferries are full, every bed is full and the two pubs are flat out for the weekend,” O’Drisceoil says.

About 25 events will keep attendees entertained, including workshops, story swaps and a concert. With the island measuring just 5km long, it’s hard to avoid becoming immersed in the festival. Every space is utilised as a venue, between the Irish college, a hostel and the pubs.

O’Drisceoil says there is a certain special skill involved in telling a story.

“A true storyteller does not tell it from a strict script. Sometimes it can lean more towards stand-up comedy. Like a joke, it depends on how you tell it. The best storytellers are the people with the best presence and ability.”