How to do Beara Peninsula by bike

A week-long tour of the picturesque area leads to ancient woods, arty villages and colourful characters 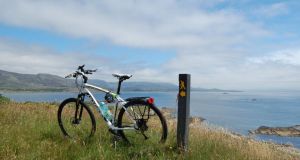 Time for a break from the bike: Looking out to Bantry Bay and the Caha Mountains from Bere Island. Photographs: Lenny Antonelli 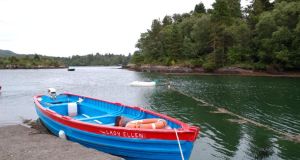 The whistle-stop schedules of tourists visiting Ireland can sound exhausting. The Ring of Kerry and Giant’s Causeway in one week? “They should just spend a week exploring one peninsula,” a friend once said, after we’d been talking to some Americans who told us their travel itinerary.

I decided to borrow his idea. Despite walking and cycling much of the west coast over the past decade, I had never been to the south-west’s mountainous Beara peninsula, and in my mind it had become near-mythic.

The place-names sounded exotic to me: Allihies, Eyeries, Lauragh, Tuosist. The peninsula itself is said to be named for Princess Beara, the Spanish wife of Eoghan Mór, legendary King of Munster.

It seemed like a place that called for slow exploration. So on a warm, cloudy Monday, I loaded a mountain bike with my tent and sleeping bag and cycled south from Kenmare. I had one week ahead of me and no plan in particular, except to find out what – if anything – makes Beara unique.

Cycling over the Caha Pass made for a gruesome start. But then the 9km downhiill into the oakwoods above Glengarriff was exhilarating. I pitched my tent at the local campsite and slept well.

The following morning I hiked around Glengarriff Nature Reserve, an ancient oceanic oak wood that cloaks this wide green valley. Later, local boatman Kevin Jer O’Sullivan brought me out into the harbour, a sea-green inlet dotted with wooded isles. He slowed his engine as we passed under a Scot’s Pine, and gawked up at a female white-tailed eagle perched above us. “Isn’t she gorgeous?” he said, full of wonder.

Then I cycled west to Adrigole, down lanes rich with fuchsia, foxgloves and flowering bramble. To the north, the Caha Mountains were thick with sea-mist, but the day was hot, so I cooled off in the sea by Zetland Pier.

Pitching my tent at the campsite in Adrigole in a slow rain, I chatted with Silver, a slim and tanned 60-year-old Italian man. In the kitchen, I had boil-in-the-bag pasta and red wine, while Silver had a ham sandwich and a Guinness.

He told me he had come to Ireland looking for work. A gardener by trade, he preferred the pace of life and the weather here. Italy was too rushed, he said, and too hot. He made coffee and rolled a cigarette. He didn’t call anywhere in particular home right now.

He bristled with a natural joy, and told me his life had taught him the importance of living for today. He wrote down some of his poetry for me, and also the Latin phrase: Carpe diem, quam minimum credula postero – Seize the day, put no trust in the future.

Waving him goodbye as I left for Castletownbere, I thought about how bike touring – particularly bike touring alone – gets you close to the marrow of a place, forcing you into the world to meet its people and see more of its parts.

From Castletownbere, I took an evening ferry to sleepy Bere Island, and biked 7km through a gloomy drizzle to Rerrin, the island’s main village.

Outside Bere Island Lodge, proprietor Brendan Murphy pulled up in his jeep to show me in. He’d been out making silage. “Can you imagine making silage in this weather?” he laughed. Later, in the pub, locals and tourists were debating Brexit. A sign with a palm tree behind the bar read: “Island time: no hurry, no worry”.

The next morning, I cycled through summer meadows above blue Lonehort Harbour, where a single yacht was moored, then followed wooded boreens on the island’s sheltered northern side back to the ferry.

In Castletownbere, I browsed the outdoor book market, then cycled out towards Beara’s western fringe, climbing out of the clear day into ragged hills and low mist. And as I rounded a corner and dropped out of the fog, the village of Allihies appeared before me, its pastel-coloured terraces rising under the sandstone cliffs of Knockoura Mountain, above a broad green valley. Allihies is, I later read, the furthest village in Ireland from Dublin. It looked mythical.

In the hostel kitchen, a man told me that when he moved to Cork city, he set out to explore the county’s peninsulas, from east to west. Now he’d reached Beara, and reckoned he might spend the rest of his life returning here.

In the morning, I visited the home studio and pop-up shop of Belgian artist Nadette Charlet and her husband Richie, whose father is from Allihies. The village has been an outpost for artists, drawn to its isolation, since the 1960s, they told me. “It’s very remote, and creative people like that,” Charlet said. She showed me her paintings of the local landscape and her intricate handmade jewellery, made with seashells, pebbles and sand.

After cycling the stunning and torturous mountain road to the village of Eyeries, I found a room just as a thick maritime mist descended. In the pub, locals told me how good the view out the window normally is. All talk was of the rain. “You just need to get some wipers for your helmet,” someone suggested.

The next morning was grey but dry, and given my slow progress of the past few days, I now had to reach Kenmare by evening. The south-westerlies were at my back, and the day grew blue and bright.

I peddled from Eyeries to Ardgroom and then to Lauragh, whose big pine woods were a shock after coming from Beara’s barren fringes. Heading east, I followed the empty coast road to Tuosist, on through the big oaks of Lehid Wood, and made it to Kenmare by dusk. I pitched my tent at the campsite and fell into a deep sleep.

One thing I kept asking myself was: what makes Beara, Beara? Sure it is wondrously beautiful: ragged, mountainous and in places wooded. But so are other parts of Ireland. More than anything, Beara seems happy to be itself. There are no big tour buses, no pony-and-trap tours, no souvenir shops. Its villages are colourful and friendly but never fake. Everyone is welcoming but there is no affected céad míle fáilte.

Not fully part of Cork or Kerry, Beara feels a place of its own. It had taken me 10 years to get here, but maybe that was the whole point. Beara doesn’t need to chase you down, it just waits for you to come.

HOW TO BIKE ON BEARA: There are various signed routes circling the roads of Beara – there’s the Wild Atlantic Way, which has superseded the old Ring of Beara driving route, and the Beara Way cycling route (not to be confused with the Beara Way hiking trail). These all converge and diverge at different points. The Beara Way cycling trail follows quiet back roads where possible. You can also buy OSI Discovery Series maps 84 and 85 and find your own way. There is a tunnel on the Caha Pass, and good bike lights are useful here.

I rented my bike from Lynne’s in Killarney (killarneycyclingtours.com) while Bike ’n’ Beara in Castletownbere (bikenbeara.ie) offers bike hire and luggage transfer. Planning your first bicycle tour? Both cycletourer.co.uk and adventurecycling.com are full of useful information.