Are there some destinations in the world we should simply not visit?

Ethical is the new buzzword for consumers, but how can we travel responsibly? 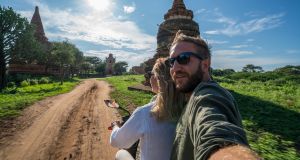 Money is a powerful tool when you travel, especially in developing nations, and it is up to those spending it to be aware of this and use it wisely. Photograph: iStock

When it comes to travelling the world, the classic fantasy is spinning a globe at random or throwing a pin on a map, then gallivanting off to wherever the wind and your whims take you.

Of course, that’s not how anyone plans in real life. So how do we actually arrive at the holiday choices we make? Some jaunts are easily decided upon. Seeking sun? Book a week in Lanzarote. Kids? Camping in France. Romance? Paris it is. You get the picture.

Some of us keep a bucket list of ultimate destinations, ticking off adventurous icons like the Taj Mahal or Mount Kilimanjaro. Others have a fantasy honeymoon in mind like the Maldives, spotted on Instagram’s explore page. The world is everyone’s oyster when it comes to dreaming, after all.

One element that has more recently come into play is the ethical implications of where in the world we go. Social consciousness is the buzzword of 2019, from rocketing rates of veganism to a newfound focus on sustainable fashion, and travel is no different.

“The power of ‘the ethical consumer’ across all areas of consumerism is rising, of which travel is just one aspect,” says Sandra Kernan, lecturer in tourism management at Dublin Business School. “We know that the tourism industry and trade – destination managers, product providers, travel agencies and tour operators – are responding to consumer demands for more ethical tourism products.”

Of course, ethical decision-making starts sooner than when you touch down in your holiday destination or book into accommodation. For a start, there’s the issue of where exactly to visit – whether or not it is ethical in the first instance to holiday in politically contentious countries such as Israel, Myanmar, Iran, Saudi Arabia, Cuba, Venezuela. the list goes on, and its content depends on who you ask.

“One person’s dictator is another person’s liberator,” says Gerard Dunne, co-ordinator of the Tourism Management Msc at TU Dublin.

There are official Government advisory warnings to be heeded of course, especially when considering a visit to a zone of potential conflict, and also political movements such as the pro-Palestine Boycott, Divestment and Sanctions (BDS) campaign. How does the individual consumer trying their best to research destinations decide where should be struck off the list? Or is that even the right question?

“Blanket boycotts may be effective, but they are a very blunt instrument,” Dunne says. “Usually the situation in most countries is much more nuanced than just a binary choice of ‘good regime’ vs ‘bad regime’. Also, blanket boycotts do not take into account the good that tourism can do for people at local level. Do you ban all types of tourism? What about VFR [visiting friends and relatives] tourists, volunteer tourists, even business tourists that may relate to NGOs, who are helping people on the ground?”

He highlights the “good that tourism can offer in oppressive or rogue states, from the point of view of keeping them open to the outside world. Tourism by its nature brings people from different backgrounds together. This can be a powerful force for good, as it allows for the exchange of views and the recognition of cultural differences. To cut that connection off through a travel boycott could be politically quite regressive.”

At the time of writing, I’m in south-east Asia. One place that comes up regularly in conversation among travellers out here is Myanmar, a country I chose to visit in November. A lot of backpackers opt not to visit Myanmar due to the ongoing treatment of the Rohingya, described by the United Nations in 2013 as one of the most persecuted people in the world. When making the decision to visit myself, I wrestled with these issues, asking myself the most basic question: Should I go there at all?

I contacted Justin Francis, chief executive of Responsible Travel, a UK-based travel company. Responsible Travel operates an anti-boycott policy, with Francis saying they “do not believe in punishing the population for the sins of their – often undemocratic – governments”.

But in its 18-year history, Responsible Travel has made one exception to this anti-boycott rule – Myanmar. “At the time, the military dictatorship owned all of the tourism infrastructure. When that changed with privatisation, and we could ensure that local people in poverty could benefit from tourism, we lifted our boycott.”

The advice from the experts all seems to point one way: it’s not where you go, but how you act when you go there. “Supporting local businesses allows a holiday to any destination to be responsible,” Francis says. “If you stay in locally owned accommodation, use local guides and eat in local restaurants, then your holiday will have a positive impact on the people and communities you are visiting.”

If you are booking with a tour operator and not travelling independently, Francis advises checking the company’s ethical policies – and ensuring it stays the same for every destination it offers travel to.

“I think it comes down to a personal moral choice,” Dunne says. “We are now in an era of what is referred to as the new tourist – travellers who are more empowered and knowledgeable, more ethical and responsible. This is why we have seen the growth in recent years of things like eco-tourism, pro-poor tourism and ethical tourism.”

But what exactly does “ethical tourism” mean in practical terms? Kernan believes the term ethical or responsible tourist is a catch-all one, encompassing concepts and concerns such as “sustainability, the environment, climate change, food, economic justice, cultural erosion, and many others, as well as human rights and political matters”.

(I’d add animal rights to the mix – especially in current eco-hippie hot spot Bali, where none of the island’s 100 so-called elephant sanctuaries meet standards for ethical treatment of animals. A quick Google search would tell travellers this, but for some, the resulting pic with an unhappy elephant ultimately trumps any misgivings.)

To get a perspective from the ground, I spoke to Colm Byrne, director of development with Australian educational charity See Beyond Borders, who is based in Siem Reap in Cambodia. He believes there is a responsibility on every traveller to “inform themselves pre-departure so that on arrival they can behave in a manner that is culturally sensitive and ethical”.

He sees this as a goal for travellers in terms of personal conduct, but also – crucially – how they actually spend their time and money. The NGO he works for is supported by two ethical local restaurants, New Leaf Eatery and Tevy’s Place, which donate much-needed money back to the cause, enabling the organisation to provide education outreach to Cambodians.

Essentially, money is a powerful tool when you travel, especially in developing nations, and it is up to those spending it to be aware of this and use it wisely. This dovetails with my own experience in Cambodia, where there is a proliferation of socially responsible businesses that share profits with worthy causes around the country.

By choosing to stay in the Mad Monkey chain of hostels in Cambodia, or eat in cafes like Epic Arts in Kampot or Daughters of Cambodia in Phnom Penh, to name but a small few, tourists can be sure their money is supporting local people directly, for causes such as community integration of people with intellectual disabilities, or survivors of sex trafficking. But this requires awareness from tourists, and the initiative to seek out places with such an ethos.

During my time in Cambodia, I also saw many visitors staying, eating and drinking in foreign-owned and run places, spending stretches at beach-side hostels in Otres in southern Cambodia, where the only Khmer staff work behind the scenes, out of sight and mind of their European, Australian and American patrons. Most importantly, little cash filters down to Cambodian people themselves. These may very well be the same travellers who discounted a visit to Myanmar on ethical grounds.

As Dunne says, “the key lies in the ‘how’ people choose to visit a country rather than ‘whether’ they choose to do so. There is a big difference between someone travelling to a self-contained resort, like Club Med, where the tourists do not leave the ‘compound’ and do not interact with the local community and all the profits are siphoned back to headquarters in Paris – and someone who travels independently, carefully choosing the accommodation and activities they use so as to benefit the locals as much as possible.”

To borrow (and butcher) a phrase: with great spending power comes great responsibility. Wherever we choose to go, Irish people travelling in developing economies dependent on tourism for survival have a responsibility to research before we go and use our dong, kip or riel wisely. As would-be globetrotters, we might be better off sticking to Lanzarote or Paris if we’re not willing to bone up before we jet off.

Fiona Hyde quit her job and life in Ireland in 2018 to go travelling. She writes monthly columns on her long road home