Follow in the footsteps of the kings and queens of Ireland

New self-guided tours take in lives of our chieftains, kings and pirate queens 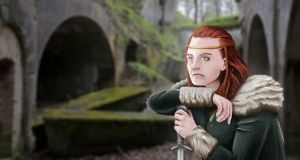 Queen Maeve of Connacht is one of the Irish kings and queens whose lives you can follow around Ireland. Illustration: Expedia

The history of Ireland, with our tales of battles and intrigue, kidnappings and murders, plus our strong women who ruled the land, would offer a rich vein for any stonking Netflix series.

A new website about the former kings and queens of Ireland taps into this vein and brings together history and travel, with free, two- and three-day self guided itineraries to explore our past and the good, bad and downright fierce who ruled the land.

The website has been developed by travel experts Expedia, with the help of historians from the National Museum of Ireland, Trinity College, Dublin and Queen’s University Belfast, and creates a fascinating account of times past.

The process of crowning kings and queens for centuries in Ireland differed to the more formal approach taken in Britain and Europe. For instance, a king or queen may not have necessarily been chosen through lineage, but by the bravery and fortitude demonstrated on the battlefield.

The most famous king was Brian Boru who defeated the Vikings at the Battle of Clontarf in 1014, although he did lose his own life. Brian was from Co Clare and one itinerary will take you on a tour around the Burren, Loop Head and Lough Derg, with maps and suggestions of places to stay.

The warrior Queen Maeve was born in Tulsk, Co Roscommon. She is mainly associated with Sligo and her cairn is on the top of Knocknarea. The route around Sligo will bring you to the coast and to explore the town itself and Maeve’s cairn, where it is supposedly good luck to leave a stone on the cairn. The route then takes you to the museum at Rathcroghan where she started her march, part of the the Táin Bó Cúailnge, to get the Brown Bull of Cooley.

Niall of the Nine Hostages – although possibly mythical – is credited with being head of the powerful Uí Neill clan. Legend has it that he brought St Patrick to Ireland as a captive from Wales and is responsible for ultimately bringing Christianity to Ireland. Another self-guided tour takes you through the Uí Neill dynasty lands in Donegal, the Inishowen peninsula and Tyrone.

The mythical pirate queen Grace O’Malley, (1530 - 1603) was a stalwart defender of her people in Connacht, waged war against the British. She corresponded with Queen Elizabeth 1 of England and went to visit her in Greenwich Castle. There are letters still in existence of their correspondence. Grace’s homeland was Clew Bay, and you can follow the Wild Atlantic Way from Westport to Newport to see her country.

The Viking king of Dublin, King Sitric Silkbeard, was the son of Olafr Sigtryggsson, Norse king of Dublin and York and Gormflaith ingen Murchada. He survived the battle of Clontarf but lost to Brian Boru’s army. He spent the latter part of his life on pilgrimage to Rome. There are several tours and spots around Dublin that remember Sitric, such as Dublin Castle, Clontarf and there are a number of places like Sitric Road in Stoneybatter and the King Sitric restaurant in Howth that remember him.

Other kings and queens on the Expedia itineraries include King Dermot MacMurrough, born around 1100AD, who became King of Leinster. During a period of exile, MacMurrough sought out help from the English, and King Henry II, and as a result is remembered as the king who brought the Anglo-Norman invasion of Ireland. This earned him the nickname of Dermot na nGall – Dermot of the Foreigners. MacMurrough’s later years were spent building abbeys, with Glendalough and Ferns among those he commisioned. Upon his death in 1171, he was buried at Ferns Abbey in Wexford. Waterford was his home town and you can explore the Viking history of this famous port on one of the routes.

Aoife MacMurrough, daughter of Dermot, was the Princess of Leinster and Countess of Pembroke. She famously married Strongbow, later laying claim to the title of Queen of Leinster following Strongbow’s appointment as king following the death of her father in 1171. An itinerary following their lives will cover the area around Laois in Leinster where the MacMurroughs ruled. Make sure to visit the Rock of Dunmase, as it was part of Aoife’s dowry.

Queen Máel Muire ingen Amlaib is believed to be the first queen of Ireland of non-Celtic lineage. The story of Queen Máel is detailed in the Annals of Clonmacnoise, an ancient catalogue of Irish history. An itinerary charting her life traverses the historic Boyne Valley. It starts in Trim at the castle, also famous for appearing in the filem Braveheart. Move onwards to the Hill of Tara where Mael Muire and her husband Máel Sechnaill mac Domnaill had their court.

You can access the free two- and three-day itineraries at Expedia.ie