The late chef and presenter visited Dublin to film one of his TV shows. We retrace his steps 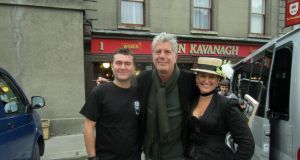 Chefs’ and journalists’ work by their very nature touches and connects with people. One of the things that made the late Anthony Bourdain special was his ability to meld the crafts of both chef and journalist together and transmit a love of both to his audience.

In the many destinations Bourdain walked in his Desert Trek shoes while traversing the globe, he uncovered little-known gems, and also explored more-well known destinations and gave them a fresh glance with his keen eye. Dublin was one of the many cities he evaluated when he visited to film The Layover which aired on the Travel Channel in January 2013, examining in his own inimitable way the food and attractions that the capital has to offer.

Bourdain’s love of “multiple pints” to quote the man himself, was a well-known fact, and the former executive chef at Brasserie Les Halles had one very strong recommendation for the best place to sink pints of the black stuff in Dublin: John Kavanagh’s the Gravediggers in Glasnevin. Established in 1833, with a location right beside one of the side entrances to Glasnevin Cemetery or “the boneyard” as Bourdain described it, The Gravediggers is one of Dublin’s best watering holes. The pint of Guinness is excellent, and the décor of the bar transports you back in time, with wood-panelling and stone slab flooring the dominant motif in a bar that is refreshingly old school. No music, live or on speakers, echoes in its Victorian structure, no, this is a pub about chat and debate. Or, quiet reflection, with a newspaper for company. Bourdain loved the place and has been quoted as saying the northside bar was “one of his top-five places to drink in the world” for the Guinness, but also the traditional Irish food - namely Dublin coddle and slow-cooked, cider-simmered, pig’s feet. The pig’s feet aren’t currently on the menu, but the Guinness and coddle most certainly are.
John Kavanagh’s (The Gravediggers), 1 Prospect Square, Glasnevin, Dublin

As anyone who has sunk more pints than might be considered wise on a night out knows, an Irish breakfast can be manna from heaven. And Bourdain was a writer that subscribed to this philosophy. The New Yorker’s recommended venue to partake in rashers, sausages, black and white pudding, eggs, fried mushrooms and tomatoes is Slattery’s of Capel Street, one of Dublin’s famous early-house 7am bars.

Like the aforementioned Gravediggers, this Victorian-era pub is famous for Arthur Guinness’ most-famous product, but it also does a very wide-ranging menu, and shows pretty much every major sporting event on big screens sprinkled liberally throughout its wide and deep interior. The bar also dedicates an entire wall to the history of the 1916 Easter Rising, with an impressive display of memorabilia from the failed insurrection.
Slattery’s 129 Capel St, North City, Dublin 1 slatterys.bar

Over on the southside of the River Liffey, Bourdain indulged in some retail therapy after his fry-up, but it was words rather than clothes that the Culinary Institute of America-trained chef opted to purchase. When Bourdain visited Ulysses Rare Books on Duke Street, it was named Cathach Books, after the oldest surviving Irish manuscript Psalter. The name was changed on Bloomsday 2013. The family-run shop is stocked to the brim with rare, collectable and antiquarian books from Ireland’s giant literary figures, the likes of WB Yeats and Samuel Beckett, with the behemoths from the country’s not-so-distant literary past and present, such as Seamus Heaney and Roddy Doyle, also represented with first editions.
Ulysses Rare Books, 10 Duke St, Dublin 2 rarebooks.ie

Having picked up some reading material, Bourdain’s trail took him back to his first love: food. He visited a restaurant based around what he would have described as one of the most vital elements of a meal: meat. Joe Macken’s BEAR on South William Street served off-cuts of steak that are under-rated and cheaper: rump, flank, feather and skirt steaks were all catered for. However, this element of the Bourdain trail is - for the moment - in hibernation prior to opening at another as yet unknown location, with Macken’s sister restaurant Crackbird, which Bourdain also gave a hat-tip to, now in BEAR’s original premises, serving up high-end fried chicken and sides.
Crackbird, 34/35 William St S, Dublin 2, joburger.ie/crackbird

As a post-lunch chaser, Bourdain recommended a whiskey to aid digestion and partook in a wee dram at The Palace Bar on Fleet Street. The Palace Bar is renowned for its live-music sessions, both traditional Irish and more wide-ranging rock and roll, but also for its whiskey selection, which offers more than 100 bottles to the public, with Bourdain opting to sup on the bar’s own nine-year-old, single cask, single malt - diluted with water and with a pint of Guinness alongside it. The Palace Bar also has strong literary connections with former editor of The Irish Times, Bertie Smyllie, as well as many other journalists and writers known to frequent the pub since its establishment in 1823; two of Ireland’s all-time greats with the pen, Patrick Kavanagh and Flann O’Brien, were also regulars.
The Palace Bar, 21 Fleet St, Temple Bar, Dublin 2 thepalacebardublin.com

Having spent the afternoon in The Palace, Bourdain recommended relocating outside the city centre to The Chophouse gastropub on Shelbourne Road in Dublin 4. He didn’t hold back in his praise, stating that, “the last time I was here I had the best meal I’ve ever had in Dublin”. He recommended lamb breast with sweetbread, pan-seared king prawns with lemon, chilli, garlic and smoked paprika butter, and the charcuterie board - which is no longer carried on the menu - as shared starters, and the porterhouse steak for the main event.
The Chophouse, 2 Shelbourne Rd, Dublin 4, thechophouse.ie

Following dinner, Bourdain’s trail takes in two more of Dublin’s best drinking establishments. The 1766 established The Long Hall on South Great George’s Street, where it’s Guinness accompanied by a glass of Redbreast 12 Year Old on the menu. Just across the street is Bourdain’s other recommendation, Hogan’s, also famous for its Guinness, but with a different vibe to the other watering holes on the route: more rock music, dim lights and late nights.
The Long Hall, 51 South Great George’s Street, Dublin 2
Hogan’s 35-37 South Great Georges Street, Dublin 2

Next up is one of Ireland’s most derided, and under-appreciated, culinary gems: the chipper. Bourdain chose Roma II on Wexford Street, serving since 1960, as the spot to indulge in a tapas-style feast of smoked cod, chips, taco chips, a batter burger, a wurly burger and a spice burger, all dunked in curry sauce.
Roma II, 28 Wexford St, Dublin Southside, Dublin 2

The following morning, Bourdain’s penultimate stop was at fish restaurant Matt the Thresher on Pembroke Street. The bright and elegant eatery does lots of dishes well, but Bourdain’s tip was Carlingford oysters - again paired with Guinness - the very same seafood he tasted while on holiday in France as a child, which began his lifelong love affair with food, followed by a gourmet sausage roll wolfed down at Lolly and Cooks on Drury Street, before jetting out of the Dirty Old Town.
Matt the Thresher 31-32 Pembroke Street Lower, Dublin 2 mattthethresher.ie

Where to stay:
Some 250 days of work-related travel a year gave Bourdain a taste for the lavish when it came to accommodation. And that trend was very much in evidence in his recommended place to lay one’s head in Dublin. He stayed at the Four Seasons on the Simmonscourt Road, now the InterContinental, for five-star luxury, with a spa to aid one’s R&R.

Honourable mentions:
Bourdain also visited Dublin to make a segment of an Ireland episode of the Travel Channel’s No Reservations, which aired in January 2007. During that trip to Dublin, the journalist visited Moore Street Market for people watching and chats with the traders; Madina Desi Curry (formerly Madina Asian Food Co) for what he billed as some of Dublin’s best South Asian-influenced dishes; King Sitric in Howth was his tip to sample a fresh Dublin haul of seafood - notably periwinkles, clams, razor clams, Dublin Bay prawns, oysters and lobster.