A World Cup for the people: how soccer fans can see the real Russia

Impact Journalism Day: The Cup for People project is fostering diversity and tolerance 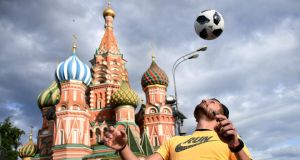 Fifa World Cup: hundreds of thousands of soccer fans will be in Russia. Photograph: Franck Fife/AFP/Getty

Impact Journalism Day 2018 is dedicated to solutions-based journalism, sharing stories of positivity and innovation. As a member of the Sparknews alliance of 50 international media outlets, ‘The Irish Times’ today brings you stories of solutions to global and local issues. For more information see impactjournalismday.com.

The Fifa World Cup has just begun in Russia, and a network of St Petersburg-based civil-society activists and social entrepreneurs have launched a campaign called Cup for People, providing an alternative programme for hundreds of thousands of soccer fans arriving from all over the world. From guided tours led by local residents about LBGT rights or environmental issues to a map of responsible consumption, the campaign hopes to spread awareness about different aspects of social life in Russia while fostering diversity, tolerance and sustainable development within the food, retail and tourism sectors.

Behind the campaign is Olga Polyakova, a 31-year-old activist engaged in civic education, citizen-co-operation movements and circular economy. “I was in Hamburg, Germany, when the G20 meeting took place there [in 2017], and I saw what kinds of alternative programmes local activists carried out – with actions, discussions and performances,” she says. “In almost every country there are people who are critical of such megaevents, which are normally financed with public funds but benefit mostly politicians and corporations. So I thought about creating a similar alternative programme for St Petersburg.”

In early 2018 Polyakova gathered about 30 activists from local NGOs and civil-society groups to create the programme. It includes debates about the impact of sports events, guided tours of lesser-known neighbourhoods in St Petersburg, and themed tours around LGBT rights or social and environmental issues such as homeless people’s living conditions or grassroots recycling initiatives. Everything takes place in English.

In addition there is a map for tourists to locate human-rights movements in the city. Meetings are organised with Soviet-era dissidents and Amnesty International. A Live Library project organises talks with those who suffer from stereotyping – namely members of the LGBT community and disabled people. The Bars without Violence initiative teaches bartenders how to react when they witness gender-based violence or harassment against women.

“We’d like to show St Petersburg beyond the tourist cliches, and that problems in most countries – the relationship between citizens and the state, corruption, megaprojects’ influence on urban life, our contemporary perception of history, social inequality and discrimination – are similar to those in our country in the eyes of locals who are trying to improve society,” Arsene Konnov, curator of the tour programme, urban researcher and tour guide, says.

Some of these initiatives also take place in Moscow. Overall, up to 1.5 million foreign visitors are expected in Russia for the event – more than 400,000 in St Petersburg alone.

One partner of the Cup for People campaign is the Fare Network, which unites activists and civil-society organisations promoting equality and diversity by using sport as a mean of social change. The network has opened two “Diversity Houses” – one in St Petersburg and one in Moscow – to hold events such as discussions and exhibitions. It has also published the Diversity Guide to Russia, about the risks and challenges different minorities and civil-society activists face in the country, and has launched a WhatsApp hotline to help visitors if necessary. “Big sport events are a chance to speak about human rights, about the role of minorities, about diversity – both on the soccer field and elsewhere in society. I see it as an instrument for positive social change,” Pavel Klymenko of Fare says.

Alongside environmental and sustainability experts, the activists have also created a map of sustainable consumption, after thoroughly vetting the daily practices of local cafes, restaurants, bars, souvenir and craft shops. The main criteria are environmental (waste management, water and energy efficiency, use of locally produced organic products), as well as social and ethical (employment terms and history, lack of discrimination, organisation or support of cultural and educational events, fostering urban communities).

The campaign organisers expect these initiatives to outlive the sports event, helping the city to develop long-term sustainability.

“We expect quite a few participants to take part in the programme. The trend for sustainable and ethical tourism is very big in Europe; we also notice a growing interest from the service industry toward sustainability in Russia. The World Cup is an opportunity to make it more popular in cafes and restaurants,” Yulia Gracheva, director of Ecounion, an environmental NGO that distributes ecological labels in Russia and also participates in the Cup for People, says.

“I hope that by inviting cafes and bars to join the map we’ll help develop initiatives and enable businesses to share their best green practices. I very much hope that this map will remain after the World Cup and help the local food industry shift toward sustainability.”

Where are the best value lunch spots in Ireland?
Real news has value SUBSCRIBE