A spectacular coastal walk around Howth head, just a hop from the city 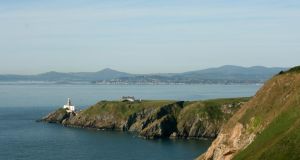 This fine coastal walk, just a few miles from Dublin city centre, is suitable for all – although particular care should be taken near cliffs in windy conditions. Walk eastwards from the Howth Dart station towards the harbour. Up to your right are the gaunt ruins of the 15th-century St Mary’s Abbey. In foggy weather they were rung to guide Howth’s fishermen safely home. During the 18th century there were many shipwrecks in Dublin Bay, and it was decided to establish a refuge harbour outside of the bay and a safe packet station for the fast mail and passenger ships sailing to and from Holyhead.

Construction of Howth harbour, designed by Charles Rennie, the distinguished Scottish civil engineer, began in 1807. At the landward end of the east pier our route turns right and ascends the road below a Martello Tower, one of many built around the coasts of Ireland and Britain during the Napoleonic Wars to protect against invasion by the French. The view to the north soon opens up, with Ireland’s Eye, a bird sanctuary and site of an early Christian monastery, in the foreground. Beyond is Lambay Island, and on the horizon the Mourne Mountains are usually visible in clear weather.

Among the houses passed on the left is Balscadden House, from 1880 to 1883 the home of the young William Butler Yeats. Where the road comes to an end, our route continues on a gravel path up along the cliffs and into another world, a rugged cliffscape coastline that could be anywhere in western Europe. The rising ground to the right is clothed in gorse, heather and bracken decorated with clusters of wildflowers, while the cliffs to the left, where kittiwakes, guillemots, razorbills and gulls vie for nesting places on the few tiny ledges, drop away to the ever restless sea 50m below.

Shortly after, as the path swings round to the south,the coast of Wicklow comes into view, and in clear weather Wicklow Head can be seen extending far into the Irish Sea 45km to the south. After around 20 minutes promenading along this glorious path, the Bailey Lighthouse (pictured above) comes into view ahead at the end of a long promontory. There has been a lighthouse here since the mid-17th century, but the present structure was completed in 1814 and originally used oil to light the lamp. Before reaching the lighthouse promontory our route leaves the cliff path and ascends uphill to the right to reach tarmac again.

A few minutes downhill along the Bailey Green Road will bring you to The Summit Inn, where, if you wish, you can stop for refreshments. Across from the inn, through an opening in a stone wall, our route continues downhill on a path that replaces the famous Howth Tramline, Ireland’s last,which was closed in 1959.

There are glimpses ahead,beyond the coastline of north Dublin and Lambay Island, of an undulating horizon made up of Slieve Gullion and the Mournes. This leafy pathway is a complete contrast to the clifftops, as it descends between great banks of rosebay willow herb, bracken, fuchsia and buddlaeia, from which wrens and warblers sing. The pleasant path crosses a few roads until it emerges onto Balkill Park. Follow the road around until you reach a path leading off it to the left. This will return you down to the main road and the starting point. The old railway station, now a pub, has a strange but historically relevant name, The Bloody Stream. In the 12th century the Normans defeated the Vikings of Howth here with great loss of life.