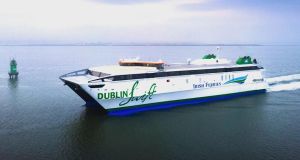 Irish Ferries has been in the news because of the late delivery of the WB Yeats, for its French routes. The launch of this craft seems to have gone smoothly

As the crow flies there are only 113.1 km between Dublin and Holyhead, but the shortest sea crossing between us and our nearest neighbour can take nearly four hours on the bigger ferries.

As of a couple of weeks ago, there’s a new fast ferry sailing Dublin-Holyhead. Irish Ferries’ new – or new to them – high-speed-craft is the Dublin Swift, which replaces the Jonathan Swift. It will sail until early October and has been sailing since April 27th. The high-speed, twin-hulled catamaran advertises a two hour sailing time, making it the fastest sea journey time to Holyhead.

It is in fact the only remaining Ireland-UK fast-ferry, since its rival High Speed Sea-Service (HSS) Stena Explorer quit the Dun Laoghaire-Holyhead route in 2014.

So let’s try this out with a quick trip to Wales. The Dublin Swift feels quite different from its predecessor. For a start the passenger area is on one level (with two car decks below). Travelling over the bank holiday weekend the boat was not full, and there were plenty of seats and an open, airy feel. The new boat made for comfortable crossings in a calm environment, and the journey is over before you know it.

The Dublin Swift can take 820 passengers, plus 220 cars, which is a slight increase on the previous capacity. Decor is unfussy, mainly white tones, with some inky blue and white abstract carpeted areas; it’s a fresh, contemporary style.

The chairs are the biggest noticeable improvement – most are airline style, comfortable reclining seats, upholstered in varying shades of plain grey, white and brown, either fabric or leather. You could easily lean back and snooze on them, and some people did. A large proportion of the seating, along the sides of the ship, is in a configuration of four seats with a table. There’s also some lounge-bar style curved bench seating around tables.

In the centre of the ship is a self-service brasserie serving meals, a small-ish gift shop with the usual booze-perfume-chocolate-watches selection, and a self-service cafe/bar with pizzas (€ 10.50+), waffles and pancakes, ice cream and other snacks.

There’s a surprisingly wide range of good quality food on offer, and while the prices are hardly a bargain, they are generally in line with Irish or Anglesey prices (but dearer than England or mainland Europe).

Drinks are similar prices to dry-land Irish prices (which generally means they’re a bit dearer than in the UK). Helpfully for those planning a journey, sample menus are on irishferries.com.

The loos are a step above the purely utilitarian of yore, with stylish taps and mirror lighting, and Dyson hand dryers. The passenger deck space outside seems considerably smaller than on the previous ship, so lounging outside in the sun during the short journey is out. Oh yes, and the free wi-fi had a good signal compared with some other ferry journeys.

In the club class lounge at the bow, most of the seating is airline-style in rows facing out to sea, rather than sociably round a table, with flip up tables and power point. The € 18 fee (per person each way) includes priority boarding, and newspapers, soft drinks, wine and coffee/tea, and a generous selection of snacks and cakes.

Irish Ferries’ parent Irish Continental Group plc bought the 8,403 tonne ship – previously called the Westpac Express – in April 2016 for US$13.25 million. The Cyprus-registered boat was on charter in the Far East before being refurbished by Harland and Wolff in Belfast and renamed the Dublin Swift. It entered service on the Dublin-Holyhead route with Irish Ferries a few weeks ago.

Irish Ferries has been in the news of late because of the late delivery of their new bigger ship, the WB Yeats, for the French routes, but the startup of this new craft seems to have gone smoothly.

The Dublin Swift was built in 2001 by Austal Ships to the same twin-hulled, catamaran design as its predecessor, in the same shipyard in Fremantle, Western Australia.

The slightly larger craft replaces the similarly named Jonathan Swift HSC which had been in service since 1999, when it claimed a crossing time of one hour 40 minutes. ICG bought it for €38.8 million and sold it earlier this year for about €15.5 million.

In the way of the comings and goings of names and ferry services, after nearly 20 years service the Jonathan Swift left Dublin Port on April 28th for Spain, according to Afloat sailing and boating magazine, the day after finishing its Irish Sea route, under a new name, Cecilia Payne.

In her new life from June 1st , Cecilia Payne is set for much warmer days in the Mediterranean, where the 35 knot-capable catamaran will sail on two routes Dénia (mainland)-Ibiza and Ibiza-Palma, each taking two hours.

In the old days the rival fast ferry on the route was the High Speed Sea-Service (HSS) Stena Explorer, until the Dun Laoghaire-Holyhead route closed with the final season ending in 2014. These days this is the fastest way across, by far, and it’s a pleasant one.

Apparently that Jonathan Swift was known as “Swifty”, a faintly ridiculous name for a great big boat. It remains to be seen if its fresher, swankier replacement gets dubbed Swifty the 2nd.