Surf ’n’ turf needn’t be hell on a plate 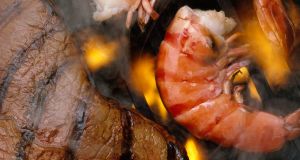 While most of us would now concur that surf ’n’ turf is not the greatest 20th-century culinary achievement, there are perhaps some redeeming features of this phenomenon.

The phrase seems to first pop up in Los Angeles in the early 1960s and was most commonly associated with the combination of lobster and beef. Why you would put these two elements together on a single plate is beyond me, but its popularity grew from there to achieve huge acceptance by the 1990s.

However, by that stage the lobster had become prawns, most often the frozen kind that did nothing to your beef except add another chewy element – but frequently tasted of nothing.

Octopus also works well with land creatures, albeit in subtle ways. I don’t know why we don’t eat more octopus in Ireland. Or am I just imagining we don’t? We serve it with potatoes and smoked paprika (the Galician way), but do any of us eat it in our day-to-day lives?

Octopus is simple to cook. Place it in a pot, cover with water and simmer until soft. Snip off the tentacles (they’re actually arms), season and then eat. Of course there are more interesting ways to eat an octopus – brush it with honey and char it with a blow torch or brush it with melted bone marrow (surf ’n’ turf) and then warm it in the oven.

A last word on surf ’n’ turf: though I despise monkfish and steak served together, roasted monkfish works wonderfully with braised oxtail.

What sold for €540k-ish in south Dublin, north Wicklow and Cork city
10