How did an astronaut come to be carved into the portico of Salamanca's cathedral?

A learning experience: Salamanca and sister cities Alcalá and Ávila are full of enriching surprises 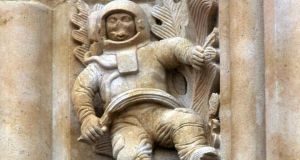 The astronaut carving at the Catedral Nueva in Salamanca 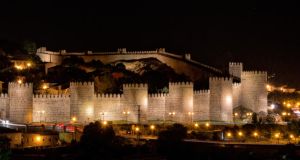 The city wall at Ávila 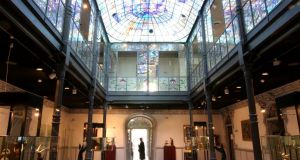 I don’t know if the world’s currently most famous astronaut has seen the portico of the Catedral Nueva in Salamanca, but if not, Commander Hadfield, you should get into your space capsule now and head for Spain.

The Catedral Nueva, or ‘New Cathedral’ is not new at all, as is the way of many churches in European cites. It’s a building project that started back in 1513, and was interrupted by various events, including the Lisbon earthquake of 1755. The reason Chris Hadfield would be agog to see the stonework in the portico around one of the entrances is that, along with the stone leaves and foliage, there is a carving of an astronaut.

Appropriately, the astronaut is floating above the heads of those curious, baffled tourists who gather beneath it to wonder how ancient stonemasons foretold the coming of spacemen. The reason the little figure is there is because the carvings around the door needed replacement in recent years, and the stonemasons included it as a symbol of one of the most important things that had happened in history since the church was first built.

Whether you know why the stone astronaut is there or not, it’s a delightful, playful surprise in a Unesco World Heritage city that has several surprises for the first-time visitor.

Salamanca’s biggest and loveliest surprise is its enclosed Main Square. Dating from the 18th century, it’s a marvel of sandstone that seems to have survived intact, rather like the Place de Vosges in Paris. Students can, and do rent the period apartments above the shops and restaurants that occupy the ground floors. Up to 150 years ago, they would have had an unsettlingly fine view of the bullfights that took place in the plaza below. A bull’s head in stone still protrudes over one of the exits from the square to signal the fact.

Salamanca is also the location of the oldest university in Spain. You can take self-guided tours of some of the oldest parts of the campus, including the cloisters, with their museum-type stone carvings. When you take your eyes off the intricately carved and painted wooden ceilings in the vast corridors, it’s with a shock that you note the seemingly medieval-looking rooms off them are in fact still in use as working lecture theatres.

It was a Saturday when we were looking around, so there was plenty of opportunity to gaze at empty lecture theatres that looked more like exquisite private chapels than places of public learning.

One of the most famous buildings in the university is the room with a painted ceiling, which used to be part of a library. It shows signs of the zodiac, painted by Fernando Gallego, and is known as “the sky of Salamanca”. The ceiling dates from 1473, and you have to peer up through the carefully regulated dim light to see the delicate angels and stars and chariots slowly emerge from the palest of blue backgrounds.

In the adjoining room, there are various beautiful antique globes. The best description I’ve ever read of a globe is the one I read there: “round and fat books”. That quote comes from Diego de Torres Villarroel, a Spanish humanist who was also a writer, professor, priest and mathematician.

Apart from the plaza, the mighty cathedrals and the university, Salamanca is famous for its acorn-fed ham. Every restaurant has a side of ham propped up on show like a small and ever-diminishing work of art. The skill needed to hand-slice the cured ham into the thinnest of pieces is mesmerising to watch. One of the oldest and best-known restaurants is in the Main Square, Asador Don Mauro.

It’s a place where families with small children and friends catching up with each other over lunch look equally at home, which is far rarer in a popular restaurant than the restaurant trade would like to have us think. I ate so much excellent Iberian ham here that I fully expected to feel hooves poking out of my insides at any minute.

Salamanca is one of three university cities close to Madrid that attracts visitors interested in culture and particular places of veneration. Ávila and Alcalá de Henares are the others, both an easy day or half-day trip from Madrid.

All three cities have one thing in common, in addition to being Unesco World Heritage sites. You are constantly hearing bells. The huge cathedrals toll their bells frequently, as do some of the university campus buildings. Yet, the effect is soothing, rather than disturbing. They are the mellowest of bells.

Alcalá de Henares is where Miguel de Cervantes was born, author of Don Quixote, one of the most influential novels ever written in Spanish. The city makes a point of honouring writers for a lifetime achievement of work, by offering a €150,000 prize each year. Among the recipients of the Cervantes Prize have been Jorges Luis Borges, Carlos Fuentes, Octavia Paz and Mario Vargas Llosa.

Ávila is best-known for St Teresa, who lived here in the 16th century. The current Carmelite convent in the city is home to 29 nuns, full to capacity, and there is a long waiting list to enter. Ávila is a walled city – 2½ km in total – and, although the walls are heavily restored, by night they emit a nicely medieval atmosphere.

The Irish writer Kate O’Brien lived here for some time, something I discovered by chance en route to the ladies in a restaurant. Limerick-born O’Brien, best-known for her novels The Land of Spices and The Ante-Room, actually took rooms above the Puerta del Alcazar on San Segundo, where we were having lunch. There is a plaque in the modest lobby put up in 2010, to commemorate the fact. One of her books was a biography of St Teresa of Ávila, published in 1951, which she presumably worked on while staying here.

St Teresa is omnipresent in Ávila. There are nun images for sale everywhere, including small stuffed toy nuns in brown habits. Possibly the oddest piece of merchandise on offer are Yemas de Saint Teresa. These are boxes of what look like candies. Bite into one and you discover you’re eating what tastes like cooked sugared egg yolk, which is exactly what they are. I’m afraid I preferred the ham.

HOW TO: SALAMANCA
Get there
Iberia Express flies from Dublin to Madrid, iberiaexpress.com. Until end March 2014, the Dublin-Madrid return flight is €135, excluding checked baggage

Accommodation
We stayed in paradors in Alcala de Henares, Avila and Salamanca. These are high-end hotels, set up with the help of the Spanish government, usually in converted historic buildings or in areas of historic interest, and each are unique. Of the three we stayed in, the Alcala is new, designed in a beautiful Japanese-style theme, doubles from €166; Avila is an atmospheric old building on the site of a former palace, doubles from €107; Salamanca is a striking, new, brutalist-style hotel on the outskirts of the city with fine views across the cathedrals, doubles from €110. The on-site restaurant in the Salamanca hotel is particularly good. Parador.es

Eating out
You won’t do better for lunch in the centre of Salamanca than the Asador Don Mauro, on the historic main square. Atmospheric interior, and specialising in local meat.

For an extensive cocktail list and modern tapas, try Doze café, at the Plaza de la Isla de la Rua. Don’t be put off by the “café” in the name – it’s a busy and popular restaurant that opens late.

Hidden gem
The Museum of Art Nouveau and Art Deco in Salamanca, is at Casa Lis which was originally a private palace. This building, with its stained-glass facade, has a beautiful, art deco style interior and an outstanding collection of glass, jewellery, fans, porcelain and furniture. Museocasalis.org