Cycle series: a coastline and a climb in Wexford and Waterford,

This route, starting in New Ross, takes in varied terrain and a few historical landmarks 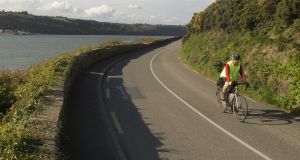 The route takes in a few coastal villages

This route takes in coastal scenery, a ferry crossing, a mountain with a road to the top with stunning views, and some charming seaside villages.

You start by The Dunbrody, an authentic reproduction of an 1840s emigrant vessel, which is a wonderful quayside attraction in New Ross. It is a great place to begin this route. Take the N25 ring road out of town and then turn right on to the R733. After 3km take another right on to the L4026 which is signposted for the Kennedy Homestead, the birthplace of John F Kennedy’s great-grandfather Patrick. The land is still farmed by his descendants and there is a wonderful interpretative centre with helpful staff beside the homestead.

It was JFK himself who said, “Nothing compares to the simple pleasures of a bike ride” and how right he was.

Continue straight through Whitechurch and on to the junction with the R733. Stay straight ahead, following signs for Dunbrody Abbey. Built in 1170 on the instructions of Strongbow, it was one of the first Cistercian monasteries in the country and is an impressive sight from all directions. It can be seen later on from Cheekpoint in Waterford peeking over the inlet across the Barrow.

About a kilometre after the abbey make a right-hand turn uphill for a shortcut to Ballyhack. Turn right turn after 3km and freewheel down into the picturesque village to catch the ferry to Passage East. The ferry crossing is less than five minutes but adds an exotic element to the route. Leave Passage by taking a right-hand turn uphill on the R683 towards Waterford city. After 2km make a right-hand turn on to a quiet road which will bring you over as far as Cheekpoint, the only place you can view the “Confluence of the Three Waters” – the Barrow, the Nore and the Suir. Great Island Power Station across the estuary detracts from the loveliness of the scene.

Retrace your route back to Passage East. There is an alternative offroad section if you don’t mind pushing your bike for a distance along a clifftop walking route – you will be rewarded with some stunning scenery if you choose to do so. The walking route can be accessed after Faithlegg national school, turning left down a cul-de-sac and continuing on from there.

On arrival back in Ballyhack, follow the coast road around to Arthurstown, which is a nice spot for a swim on a summer’s day.

Take the first left in Arthurstown and then turn right at the next crossroads on to the L4053. Cross over the R733 and continue to the next crossroads. Away to your left you can see your destination, Slieve Colitia. Turn left and merge with the R733 for 8km. Take the turn for John F Kennedy Park. The climb starts immediately, and opposite the entrance to the park is a road to the top of Slieve Colitia. This is where you are heading. It’s 3km to the top and a darn good pull too. But it is well worth the effort as this is the best vantage point in all of Wexford with amazing views out to the Saltee Islands, down to Hook Head and Dunmore East, and north towards New Ross.

Be careful of the speed bumps on the descent.

On reaching the main road, turn left to return to New Ross on back roads. Take a left turn after 2km on to the L8054 which snakes its way across to the R734 and R733. The surface is poor but is okay to cycle on. The main road runs back into New Ross but take the more scenic option: after about 1km make a right-hand turn and enter New Ross on this hilly back road. Cross the ring road and continue straight ahead along Charlton Hill before turning left down Cross Street to return to the quayside and the Dunbrody.

All in all, a route to remember.

Location: Cos Wexford and Waterford

Start/finish The Dunbrody Famine Ship Experience in New Ross is the spectacular starting point for this route. There are pay-and-display car parks located close by.