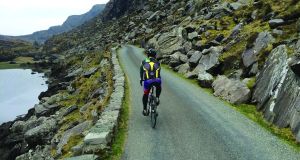 The Gap of Dunloe and the Black Valley are among the among most renowned areas for tourists in Kerry, and with good reason. The glacial landscape appears timeless and, for the most part, untouched by modern life. The majority of the route is on quiet roads with little traffic and ample opportunity to soak up the surrounds, including views of Lakes of Killarney, the MacGillycuddy’s Reeks, Purple Mountain, Ladies View and Muckross Park.

The surface for most of the route is as good as you would hope for in a remote area such as this; however, caution is required in one or two areas. This route is relatively short but due to the varied terrain and some challenging climbs it is a good idea to begin the cycle with plenty of provisions as options for buying food are located only at the start and towards the end of the cycle.

To begin, head in the direction of the Gap of Dunloe from Kate Kearney’s Cottage. At the beginning this might seem like a busy route with potentially lots of activity from jarveys, tourists and walkers; however, after only a few short kilometres there should be very little traffic.

The initial ascent leads up to a bridge in between the first two lakes of the day. This bridge is known as the Wishing Bridge and wishes made on it are supposed to come true. Continue along the Gap of Dunloe where the terrain will dip and rise in several areas alongside glacial rocks and lakes until the road reaches a sign for the Black Valley and it is here that the second part of the journey begins as the road rolls downwards on a quick descent. About 2km into the descent take a left at a fork in the road and on past the church, heading further into the valley.

After another kilometre there is a fork in the road. Our route follows the path to the right; however, an optional detour to the left leads on towards Lord Brandon’s Cottage which was built in the nineteenth century and primarily used as a hunting lodge. In the summer months it is open during the day as a restaurant and also provides a quick return to Killarney via a boat trip to Ross Castle, which is another option for a shortened version of the route. Bikes can be carried on the boats, depending on capacity and the price for the boat trip is approximately €15.

The next 8km are right in the heart of the Black Valley and are on mostly flat or rolling roads with plentiful picnic spots on riverbanks and opportunities to soak in the surroundings, some of which are lush and green while others seem scorched and quite dry in summer. The remoteness of this area is underlined by the fact that it was the last place in Ireland to receive electrification.

With approximately 17km completed, take a right at a fork in the road (ignoring signpost directions for Killarney and Kenmare) onto a smaller road. This section of road is a bit narrower and rougher than what has been covered up to now, but as it ascends, views of Lough Brin and Ballaghbeama mountain pass in the distance are breathtaking.

Continue on a descent, with Lough Brin on the right, and follow the road as it sweeps left and along a well-surfaced section until you meet a crossroads where the route turns left onto the R568. From here the road deadens slightly and becomes hard to pedal on as it makes it way gradually up towards Moll’s Gap.

Shortly before Moll’s Gap is the Strawberry Field Pancake Cottage, which serves excellent savoury and sweet pancakes as well as tea and coffee, and there is always a fire lit on a cold day. There is also a cafe at Moll’s Gap itself with more ample seating to cater for a larger crowd.

Either of these is ideal for a stop and reflection on the terrain just covered. The view from Moll’s Gap is a good indication of the road to come with Killarney with its lakes nestled in the distance beneath. From Moll’s Gap follow signposts for Killarney on the N71 as the road makes its way mostly downwards, along with one or two surprise short rises.

There are several spots along the way that have marvellous views of Killarney’s lakes, among them Ladies View, Torc Waterfall and Muckross House and Gardens. Approaching Killarney town, follow signposts for Killorglin and Ring of Kerry (N72). On leaving Fossa, turn left, following the brown signs marked for the Gap of Dunloe, which will bring you back to Kate Kearney’s Cottage and the start of your journey.

An edited extract from Cycling Kerry - Great Road Routes by Donnacha Clifford and David Elton, published by The Collins Press, price €14.99. It is available from all good bookshops and online from collinspress.ie.

Start/Finish
From Killarney town centre take the N72/Killorglin road and follow signs for the Gap of Dunloe, stopping just 10km outside the town at Kate Kearney’s Cottage where there is lots of parking, as well as food and last minute supplies if needed.